Corey LaJoie picked up the 5th last-place finish of his Monster Energy NASCAR Cup Series career in Sunday’s AAA 400 Drive For Autism at the Dover International Speedway when his unsponsored #72 TriStar Motorsports Chevrolet fell out with a blown engine after 20 of 400 laps.

The finish, which occurred in LaJoie’s 38th series start, was his series-leading third of the season, his first since Phoenix, seven races ago. All three last-place runs have been due to engine failures suffered in the first 23 laps. In the LASTCAR Cup Series rankings, it’s the 15th for car #72, the 679th by reason of engine failure, and the 744th for Chevrolet. Across NASCAR’s top three series, it’s the 30th for the #72, the 1,055th by engine trouble, and the 1,594th for Chevrolet.

Following his blown engine in Phoenix, LaJoie didn’t drive TriStar Motorsports’ #72 for four races, handing over the wheel to teammate Cole Whitt. In that time, Whitt extended his streak of finishing no worse than 28th with another 28th-place run at Fontana, a 27th at Martinsville, and a season-best 19th in Texas. The following round at Bristol saw LaJoie rejoin the team, which unlike Daytona and Phoenix was no longer carrying primary sponsorship from Schluter Systems. Despite all the crashes and rain delays, LaJoie averted his third-straight last-place run in as many starts, finishing 25th, six laps down to race winner Kyle Busch. After two more runs by Whitt – a 30th at Richmond and a 21st at Talladega – LaJoie would return to the driver’s seat at Dover.

Once again, LaJoie would run the team’s black-and-white Chevrolet without a primary sponsor. Schluter Systems had signed on as an associate, putting their logos on the lower end of both quarter-panels. Also joining the effort was race sponsor Autism Delaware, whose logo occupied the trunk lid.

Of the 38 entered drivers for 40 spots, the shortest Cup field at Dover since 1993, LaJoie ran 35th in all three practice session. During Friday practice, he also lost another engine, and was thus unable to turn a lap in qualifying that afternoon. As the only driver to not turn a lap in that session, the #72 would roll off 38th, and incurred a redundant tail end penalty for the engine change.

On race day, LaJoie was joined at the rear by Austin Dillon, whose team made unapproved adjustments to the splitter on the #3 AAA Chevrolet, Alex Bowman, whose #88 Nationwide Chevrolet failed inspection, and polesitter Kyle Larson, whose own inspection penalty allowed third-place starter Martin Truex, Jr. to inherit the pole. When the race started, the group passed a brand-new Cup team on the circuit. 1990 Dover winner Derrike Cope returned to make his season debut as a driver, entering a second car from his StarCom Racing stable. Cope’s #99 was trailing in 38th when trouble broke out on Lap 4.

Coming off Turn 4, 29th-place starter Michael McDowell in his #34 Dockside Logistics Ford was spun by 26th-place starter Darrell Wallace, Jr. in the #43 Eckrich Chevrolet. Unlike a similar spin at Bristol, McDowell managed to continue on without serious damage, but took last as the first caution flag flew. Under caution on Lap 6, McDowell traded the spot with Bowman, then Cope’s teammate Landon Cassill in the #00 RNH Electric Chevrolet as the two made pit stops. Cope took last on the Lap 8 restart, and on Lap 19 was the first to lose a lap.

On the 20th circuit, LaJoie was running 32nd when his car erupted in white smoke down the backstretch, just as it had at Daytona and Phoenix. “Go to the garage,” said someone on the crew, clearly in disbelief. “We’ll let you know.” LaJoie made it down pit road, then entered the garage. Stopped in the infield near Turn 2, the crew looked over the car, then quickly found the engine problem to be terminal. On Lap 29, the #72 was pulled off RaceView, and by Lap 32, FOX Sports’ leaderboard showed him as “Out.”

Cope finished 37th. After reporting that he was “just running it as hard as I can without tearing it up” on Lap 126, he lost control 26 laps later, spinning off Turn 4 and nosing hard into the inside wall. Cope was uninjured, but the car was done for the day. As it happened, the accident was well-timed for Cope’s teammate Landon Cassill. Cope’s crew chief reported over the radio they were behind on re-mounting tires for the #99. In the first Cup start for the #99 since October 23, 2016, it was very nearly the number’s first last-place run in a Cup race at Dover since May 18, 1980, when D.K. Ulrich lost an engine after 2 laps of the Mason-Dixon 500.

36th fell to Cody Ware in the #51 KeensBuildings.com Chevrolet. After his incident driving Mike Harmon’s XFINITY car in practice, Ware ended up striking the wall in Turn 4 on Lap 255, knocking the rear bumper panel and spoiler from the car. Ware stopped in the high lane, then rolled down pit road. After a brief stop, he was directed back to the garage, done for the day with crash damage.

Kyle Busch was struggling with a vibration from the very start of Sunday’s race, but still managed to stay in the Top 10 in Joe Gibbs’ fast #18 Pedigree Toyota. Unfortunately, on Lap 271, the driveshaft failed entering Turn 1, spilling rear end grease all over the upper groove. Busch made it to pit road, then followed Ware’s path to the garage area, where he was done for the day. It marked Busch’s fourth DNF in the last five spring races at Dover.

Rounding out the Bottom Five was Paul Menard, another of the many drivers who suffered mechanical issues at “The Monster Mile.” Menard pulled into the garage on Lap 110 after the crew had difficulty removing the wheels during a pit stop. Repairs cost him 44 laps to the leader before he resumed action. He’d lose another two circuits before the finish, but still ended up the final car to come home under power.

LASTCAR STATISTICS
*This marks the first last-place finish in a Cup race at Dover for both LaJoie and the #72.
*This last-place run was almost 20 years to the day that Corey’s father Randy LaJoie earned his first Cup Series last-place run in the exact same event on May 31, 1998. 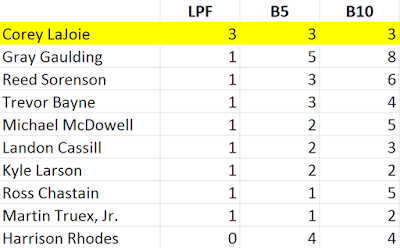