Ross Chastain picked up the 1st last-place finish of his Monster Energy NASCAR Cup Series career in Sunday’s Food City 500 at the Bristol Motor Speedway when his #15 Low T Centers Chevrolet was involved in a multi-car accident after 3 laps.

A native of Alva, Florida, Chastain has been racing since he was twelve, getting his start in both late models and the Florida Fastruck Series (now the Florida Pro Truck Series). The biggest win of his early career came during the World Series of Asphalt at the New Smyrna Speedway in 2011.

That same year, Chastain made his Truck Series debut at Indianapolis Raceway Park. Driving for Stacy Compton’s Turn One Racing with sponsorship from the National Watermelon Promotion Board (Chastain grew up on his family’s watermelon farm in Alva), Chastain impressed with a 10th-place finish. Chastain’s melon-sponsored machines became a regular sight in the Truck Series for the next two seasons, including a strong partial schedule in 2013 with two poles and a runner-up to James Buescher at Iowa.

In 2014, Chastain made his XFINITY Series debut at Charlotte driving for Jimmy Dick. Once again, he impressed his first time out, finishing 18th – the fifth-best finish in the team’s 58 starts. In 2015, he landed his current XFINITY Series ride with Johnny Davis’ JD Motorsports in the #4 Chevrolet. The duo started out with a 9th-place finish in the Daytona opener. Over the next three seasons, driver and team showed measured improvement, culminating with a best points finish of 13th last year and a new career-best XFINITY finish of 4th at Iowa. As of this writing, that Iowa run remains one of only four top-five finishes earned by JD Motorsports.

Last year, it was again time for Chastain to take the next step, and again he excelled. This time, he’d run a tripleheader at Dover, culminating with his Cup Series debut in the 400-miler driving for Jay Robinson’s Premium Motorsports. His #15 carrying the watermelon colors and sponsorship from the Delaware Office of Highway Safety, Chastain was locked-into the field with the Charter acquired from the shuttered HScott Motorsports. After an 8th-place run by Michael Waltrip in the Daytona 500, the car hadn’t finished any better than 21st. Chastain improved on this with a 20th-place run, three laps down to Jimmie Johnson.

This year, Chastain and Premium Motorsports reunited at Atlanta, and the youngster has driven the #15 in every Cup race since. Coming into Bristol, Chastain had finished inside the Top 30 every week with a season-best 18th just last week in Texas, a new career-best for the driver. On the XFINITY side, he entered the weekend 12th in points after his first DNF of the year, a rear gear issue in Fort Worth. Bristol would make his first XFINITY start of the season with the Florida Watermelon Association on his #4 Chevrolet.

At Bristol, Chastain ran 17th and 23rd in Friday’s two XFINITY practices, but Happy Hour was marred by an incident not of his own making. The incident occurred while Chastain and teammate Garrett Smithley in the #0 slowed to avoid a wrecked Tony Mrakovich in Turn 2. At that same moment, Christopher Bell closed on the pair at full speed. Citing a brake issue, Bell couldn’t slow his #20 GameStop / Seagate Game Drive for Xbox Toyota in time and squeezed between the two JD Motorsports cars. Bell sideswiped Smithley, then struck the right-rear of Chastain. All four cars were repaired in time for the race. Chastain’s received a new TV panel while the right-rear quarter-panel was straightened and re-decaled. The team’s hard work was rewarded – Chastain qualified 15th and finished 9th, matching his season-best finish in this year’s Daytona opener.

On the Cup side, Chastain ran 34th in opening practice, didn’t complete a lap in the second session, and ran 33rd in Happy Hour. In qualifying, he jumped to 27th on the grid with a speed of 125.248mph (15.320 seconds), just over three-hundredths of a second from advancing to Round 2. It was Chastain’s best career Cup start, improving on his 31st-place showing a week ago in Texas.

Qualifying 39th and last in Sunday’s short field was Kevin Harvick, the only driver to not turn a lap in Round 1. Harvick had been sent to a backup car after his primary suffered a failure entering Turn 3 on Friday, sending the car hard into the outside wall. On race day, he was joined at the back by fellow Bristol winners Jimmie Johnson and Kurt Busch. Johnson cut a tire in qualifying while Busch, the outside-polesitter, wrecked with five minutes left in Happy Hour, sending him to a backup car.

When the pace car lights turned off, Harrison Rhodes surrendered his 37th starting spot to drop to the rear, lining up behind Harvick and Busch. When the race started, Rhodes’ Toyota remained in last, watching as Harvick, Busch, and Johnson began to pick their way through the field. The group made quick work of Chad Finchum, making his Cup debut in Motorsports Business Management’s #66 Concrete North, Inc. / Smithbilt Homes Toyota. On Lap 2, Rhodes passed Finchum off Turn 4, and Finchum got past D.J. Kennington in Turn 2. Kennington, his #96 Toyota honoring the lives lost in the Humbolt Broncos tragedy, had just been cleared by the #66 when trouble broke out in front of him.

Up until this point, Las Vegas last-placer Michael McDowell had been enjoying one of the best weekends of his career. He qualified 9th – his second-best starting spot behind a 6th at Talladega in 2014 – and early on was locked in a tight battle with 12th-place starter Daniel Suarez in the #19 ARRIS Toyota. But on Lap 4, as McDowell and Suarez came off the fourth corner, McDowell spun and collected Chase Elliott in the #9 Mountain Dew Baja Blast Chevrolet. At the time, Ross Chastain was slowing off Turn 4 when he rear-ended a slowing Martin Truex, Jr., steering the #78 Auto-Owners Insurance Toyota into the pileup.

Chastain steered his car to the apron with heavy damage to the front valence. He turned to the garage area, where the crew began repairs, waiting to see if they could come back out. On Lap 13, the crew reported that NASCAR would not let them return under the new Crash Clock protocol, and their day was done. “We’re done,” said a crew member over the radio. “We’re not allowed to go back out.” McDowell’s #34 ran another six laps before his Crash Clock expired, leaving him a disappointing 38th.

The final three cars in the Bottom Five were eliminated in another multi-car pileup on Lap 116. Contact between the #6 AdvoCare Ford of Trevor Bayne and the #37 Bush’s Beans Chevrolet of Chris Buescher steered Bayne into the #51 Industrial Construction Experts Toyota of Harrison Rhodes. Caught in the right-rear, Rhodes spun up the banking directly into the path of race leader Ryan Blaney’s #12 REV Ford. The accident eliminated Rhodes, Buescher, and Blaney, who led 100 of the first 117 laps. The trio soon took the final three spots in the Bottom Five from the lapped machines of Ty Dillon and Martin Truex, Jr. 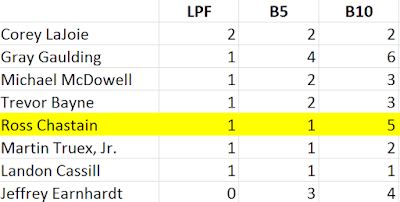