Jeff Green picked up the 103rd last-place finish of his NASCAR XFINITY Series career in Saturday’s Rinnai 250 at the Atlanta Motor Speedway when his unsponsored #38 RSS Racing Chevrolet fell out with a vibration after he completed 5 of 163 laps.

In his return to Rod Sieg’s underdog team RSS Racing, Green enjoyed another fine run on NASCAR’s restrictor-plate tracks. Last week in Daytona, he welcomed new sponsorship from Night Owl Contractors, which ensured that all three of RSS’ Chevrolets – including the #93 of Ryan Sieg and the #39 of J.J. Yeley – would be able to run the full race. Green was running in the lead pack in the final laps, and despite rear bumper damage suffered in a crash, he still recovered to finish 11th, besting Yeley in 18th and Sieg in 21st. It was Green’s third finish of 11th or better in the last five XFINITY plate races.

Atlanta, however, would see Green and his #38 return to the “start-and-park” duty that last year led him to a record-setting 100th series last-place finish and his sixth LASTCAR XFINITY Series title. Records indicate that the Night Owl sponsorship from Daytona didn’t carry over to Saturday. As such, Green did not participate in Friday’s opening practice session, then ran a strong 27th in Happy Hour.

With 42 drivers arriving to contest the 40-car field (following the withdrawal of B.J. McLeod’s #99 Chevrolet), Green matched his 27th-best lap in qualifying with a speed of 174.884mph (31.701 seconds) – more than enough to bump the lone two DNQs of Josh Bilicki (his second-straight DNQ since joining JP Motorsports in the #45 Prevagen Toyota) and owner-driver Mike Harmon in the #74 Shadow Warriors Project Chevrolet.

Two other surprising runs in qualifying belonged to Timmy Hill and Morgan Shepherd. Hill, driving Motorsports Business Management’s old blue Dodge, ranked 29th, recovering from a controversial Daytona where several Cup team’s technical infractions bumped him from the field. Shepherd, who also missed the cut at Daytona, ranked 31st at a track where he’d won three times in Cup. It marked the second-straight time Shepherd didn’t have to rely on Owner Points to start an XFINITY Series race, following his 33rd-place start at Phoenix last fall.

Starting 40th and last on Saturday was Matt Mills, who was moved from JD Motorsports’ #15 Chevrolet to the team’s #0. He was joined at the rear by Shepherd, whose team made unapproved adjustments, Ryan Sieg, who changed tires and missed driver intros, and Spencer Gallagher, whose GMS Racing team made unapproved changes. During the opening green-flag stretch, Green fell to the rear and was the first to pull behind the wall, done for the afternoon.

39th went to Cole Custer, who was collected in a three-car accident with John Hunter Nemechek and Elliott Sadler, ending what had been a strong 4th-place start for his #00 Haas Automation Ford. Shepherd ended up 38th, pulling off the track after 49 laps, citing brake trouble. J.J. Yeley, moved to RSS Racing’s #93 as Ryan Sieg returned to the #39, lost an engine after 92 laps, leaving him 37th. Mills rounded out the Bottom Five, finishing under power, but nine laps down to race winner Kevin Harvick.

LASTCAR STATISTICS
*This marked Green’s fourth XFINITY last-place run at Atlanta, but the very first at the track for an XFINITY car #38.
*Green has now finished last at least once in the last nine consecutive XFINITY Series seasons. 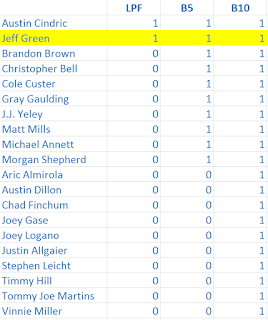