Austin Cindric picked up the 1st last-place finish of his NASCAR XFINITY Series career in Saturday’s PowerShares QQQ 300 at the Daytona International Speedway when his #60 Pirtek Ford was involved in a multi-car accident after 10 of 143 laps. The finish came in Cindric’s second series start.

The son of Team Penske president and IndyCar team strategist Tim Cindric, Austin Cindric made his way into NASCAR by way of the ARCA Racing Series and the Camping World Truck Series in 2015. Just 16 at the time, Cindric finished 4th in his ARCA debut at Iowa and 25th in Trucks at Martinsville. His truck ride was with Brad Keselowski Racing, the top Ford team on the circuit. He went full-time Truck racing last year, which turned out to be BKR’s last year in operation. Cindric broke through with a controversial win at Mosport in September when he spun Kaz Grala from the lead on the final lap.

This year, Cindric landed a ride in Roush-Fenway’s fleet #60 Ford Mustang, sharing the ride with Ty Majeski and Chase Briscoe. Cindric landed the ride for Daytona with Pirtek, his sponsor with BKR at Kansas last year. It would be his first XFINITY Series start since a one-off in Penske’s #22 last year at Road America. He started on the pole that day and finished 16th in a race won by underdog Jeremy Clements.

At Daytona, Cindric ran seventh in Friday’s opening practice and didn’t participate in Happy Hour. He ran 11th in Round 1 of qualifying, and 11th again in Round 2 with a lap of 186.768mph (48.188 seconds), besting Elliott Sadler, who didn’t turn a lap in that second round due to overheating issues. Cindric was then moved to 10th on the grid when 3rd-place starter Matt Tifft’s time was disallowed, forcing Tifft to take a provisional in 39th. With Tifft now driving for Richard Childress Racing, which had a high ranking in Owner Points, this triggered a last-minute shuffle at the back of the lineup.

Starting 40th was Josh Williams, who also failed post-qualifying inspection after his #90 Star Tron Star Brite / Stay Sky Hotel Chevrolet from DGM Racing ran 27th in Round 1. He took the last spot from Cup regular Austin Dillon, who (along with Mike Harmon in his #74 Shadow Warrior Project Dodge) didn’t turn a lap in Round 1. Combined with the penalized Matt Tifft, this bumped out Timmy Hill, who was originally in on Owner Points, set to start 36th in Motorsports Business Management’s #66 Toyota. The glut of Cup teams in the Bottom Five bumped Hill out based on his Owner Point ranking, and then his speed. His spot in the field ended up going to NXT Motorsports’ Gray Gaulding, whose #54 VSI Racing Toyota was originally the fastest car to miss the show. Hill ended up sent home along with Ray Black, Jr., Chris Cockrum, Morgan Shepherd, Josh Bilicki, and Mike Harmon, who had already DNQ’d.

According to RacingUnderdogs, Gaulding’s #54 was just coming off pit road before the start of Saturday’s race. He trailed the field by 4.570 seconds on the first lap. By Lap 3, J.J. Yeley had taken the spot in RSS Racing’s #39 Superior Essex Chevrolet. From there, Yeley began to lose touch with the lead pack. He was 3.337 seconds back of the next car on Lap 5, 5.557 back on Lap 6, and 11.616 on Lap 9. On the 11th circuit, he was still running in 40th, less than four seconds away from losing a lap, when trouble broke out up front. Josh Williams, the last-place starter, had charged his way up to 12th in the first 10 laps.

Cindric’s #60 Ford appeared to be running loose in the opening laps, and by the 11th lap, he was stuck in the middle lane of a tight battle in Turn 4. Running seventh with Daniel Suarez to his outside and Tyler Reddick to his inside, Cindric slid into Suarez twice coming off the corner. The second hit knocked him to door of Reddick, and he slammed the wall directly in front of Suarez’s two Joe Gibbs Racing teammates. Brandon Jones, driving the #19 Juniper Networks Toyota, ended up with the right-front of his splitter bent up. Next to be hit was Christopher Bell, trying to pass Cindric to the inside in the #20 Rheem Toyota. The two made much harder contact, destroying the right-front of his machine. Cindric climbed from his car in the infield grass, done for the day. Bell made it around one more time before going to the garage, leaving him 39th. Jones recovered to finish 10th.

Rounding out the Bottom Five were 38th-place Gray Gaulding, whose last-minute entry broke the rear gear heading down the backstretch. 37th went to Michael Annett, whose #5 Pilot / Flying J Chevrolet lost the splitter when he slid into the grass on Lap 107. 36th-place Brandon Brown had a strong run early, but his new #86 CON.io / Coastal Carolina University Chevrolet was collected in the day’s biggest multi-car accident on Lap 122.

LASTCAR STATISTICS
*This marked the first last-place finish for car #60 in an XFINITY Series race since May 9, 2008, when Carl Edwards’ #60 Scotts Water Smart Ford started on the pole, then crashed out after 3 laps of the Diamond Hill Plywood 200 at the Darlington Raceway. Roush-Fenway’s #60, made famous by Mark Martin and Greg Biffle, has finished last just six times. The number has never trailed at Daytona. 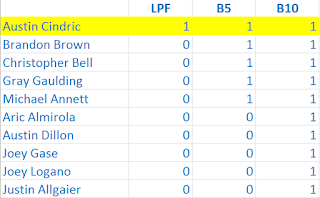