Travis Kvapil picked up the 3rd last-place finish of his NASCAR Camping World Truck Series career in Friday’s NextEra Energy Resources 250 at the Daytona International Speedway when his #50 Rhino Rush Energy Chevrolet fell out with engine problems after 2 of 100 laps.

The 2003 Truck Series Champion rejoined team owner Mark Beaver, who has fielded trucks for Kvapil off and on for the last four years. The two first worked together under the banner of MAKE Motorsports, which last year became Beaver Motorsports after co-owner Tracy Lowe parted ways to form TJL Racing. Kvapil made two of his five starts last year in Beaver’s #50, finishing 24th at Daytona and 29th at Martinsville, before Josh Reaume took over for much of the remainder of the season. For their Daytona reunion, new sponsorship came from Rhino Rush Energy Drink.

Kvapil was one of 36 drivers to take time in qualifying. He was one of three drivers to not participate in Thursday’s opening practice, then ran 33rd of 35 in the afternoon session and 20th of 26 in Happy Hour. In qualifying, he ran a lap of 170.898mph (52.663 seconds), second-slowest behind B.J. McLeod, a late replacement for J.J. Yeley in TJL Racing’s #1 Motorsports Safety Group Chevrolet. Regardless, Kvapil’s 2003 title locked him into the field with the Past Champion’s Provisional, securing him the 32nd and final starting spot. McLeod failed to qualify along with Bobby Gerhart in Mike Mittler’s #63, Josh Reaume in his own #33, and Cody Ware in Mike Harmon’s #74.

When the race began, Kvapil took the green in last, but by Turn 3, he’d climbed past Jennifer Jo Cobb in her #10 Think Reality Chevrolet. Cobb then passed Jordan Anderson, who debuted his own team and his #3 Jacob Companies / Bommarito.com Toyota. Anderson held last place at the stripe, three seconds back of the leader. By the next time by, Anderson moved past Premium Motorsports’ #15 Troptions Chevrolet, driven by new full-timer Robby Lyons.

On Lap 3, Lyons was still trailing the pack while Kvapil had climbed from last up to 27th. Running the middle lane, Kvapil’s #50 suddenly erupted in smoke, sending the six trucks behind him scattering. The following pack managed to avoid wrecking while Kvapil moved his slowing truck to the apron, drawing the first yellow of the night. Kvapil pulled behind the wall under the yellow, done for the night. He was officially classified “out” on FS1’s ticker by Lap 17.

31st went to Jennifer Jo Cobb, who took the hardest hit of the night when she struck the inside wall off Turn 4 and erupted in flames. Cobb climbed out, but was favoring her arm, leading to a stay in the infield care center that lasted the rest of the race. Bo LeMastus’ first run in the #54 DGR-Crosley Toyota ended in a multi-car accident on the ensuing restart, followed by 29th-place Chris Fontaine with electrical issues on his #47 Glenden Enterprises Chevrolet. Rounding out the group was Parker Kligerman, who suffered right-front damage to his #75 Food Country USA Chevrolet, then cut down a right-front tire and smacked the outside wall.

LASTCAR STATISTICS
*This marked the first last-place finish for truck #50 since October 3, 2015, when Tyler Tanner’s turn in Beaver’s #50 Landworks Solutions Chevrolet ended with ignition trouble after 5 laps of the Rhino Linings 350 at Las Vegas. The number had never before finished last in a Truck Series race at Daytona. 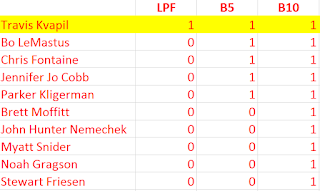