Scott Stenzel picked up the 2nd last-place finish of his NASCAR Camping World Truck Series career in Saturday’s Active Pest Control 200 at the Atlanta Motor Speedway when his #83 Fr8Auctions.com Chevrolet failed to complete any of the 134 laps due to electrical issues.

The finish, which came in Stenzel’s 12th series start, was his first of the season and his first in a Truck Series race since May 9, 2014 during the SFP 250 at Kansas, where his #36 Mittler Brothers Machine & Tool Chevrolet also failed to complete a single lap due to electrical issues. In the LASTCAR Truck Series rankings, it’s the fourth for truck #83, the 345th for Chevrolet, and the 31st by reason of electrical issue. Across the top three series, it’s the 29th for #83, the 1,578th for Chevrolet, and the 110th by reason of an electrical issue.

On February 6, the Minnesota dirt tracker announced that he had signed with D.J. Copp’s Truck Series team Copp Motorsports, part of a new team partnership with E2 Northeast Motorsports. Stenzel would be returning to the Truck Series for the first time since 2014, when he ran seven races for the famous Mittler Brothers team with a season-best 22nd at Talladega. Carrying sponsorship from E2, Stenzel made his way into the Daytona field, putting Copp’s #83 31st on the grid and finishing a new career-best 15th.

A picture tweeted by Truck Series alum Ben Kennedy on Saturday revealed that Stenzel’s truck for Atlanta had a simpler look, replacing the vibrant black-and-blue colors from Daytona with a simple white Chevrolet. Sponsorship came from Fr8Auctions.com, which also backed David Ragan’s #38 on the Cup side. After skipping the opening practice session, Stenzel ranked 28th of 31 drivers in Happy Hour, then squeezed his way into the field on Owner Points despite not turning a lap in time trials. He would start 32nd, shotgun on the field.

Two drivers were sent home after qualifying. The first was Daytona last-placer Travis Kvapil, whose #50 Motorsports Safety Group / Clyde May’s Chevrolet also didn’t turn a lap in qualifying. Tim Viens was also unable to turn a fast enough lap when he was tabbed to drive in place of Mike Harmon in Harmon’s #74 Chevrolet. Harmon’s own XFINTY Series car had also missed the cut for the race run earlier that day.

Kennedy’s picture of Stenzel’s truck was taken immediately prior to the start of the race, showing the #83 lined up at the end of the field. However, according to MRN Radio, the truck never turned a lap in the race, and was instead pushed behind the wall at the start, citing electrical issues. Thus, Stenzel ended up taking his second last-place finish uncontested.

The battle for 31st was briefly intense. Both Clay Greenfield in TJL Motorsports’ #1 (carrying the sponsorship from Viens’ DNQ’d #74) and Jordan Anderson in his own #3 Bommarito / Lucas Oil Chevrolet had been sent to the rear for unapproved adjustments. Both Greenfield and Anderson passed Robby Lyons’ #15 Troptions Chevrolet on the first lap, then Lyons moved past Joey Gase at the end of the second circuit, not long before Norm Benning spun his #6 Zomongo / H&H Transport Chevrolet for the first yellow. Gase, driving Jennifer Jo Cobb’s unsponsored white #0 Chevrolet, re-took 31st from Benning on Lap 7 as he pulled down pit road. The crew looked under the hood, then pushed Gase’s truck behind the wall, securing 31st.

30th fell to Akinori Ogata, who left with crash damage to Mike Mittler’s #63 Nisshinbo Chevrolet. 29th went to Benning, who made it 108 laps before a vibration ended his run. Rounding out the group was Greenfield. One week after his strong qualifying run and race at Daytona, Greenfield was flagged off the track for running too slow.

LASTCAR STATISTICS
*This marked the second-consecutive time that the #83 has finished last in the Truck Series race at Atlanta, following Todd Peck’s early overheating issues last year (LINK). These are the two most recent last-place finishes for the number in the series.
*Stenzel is the 25th consecutive Chevrolet to finish last in a Truck Series race and the eighth out of the last 11 last-place finishers to fail to complete a single lap. 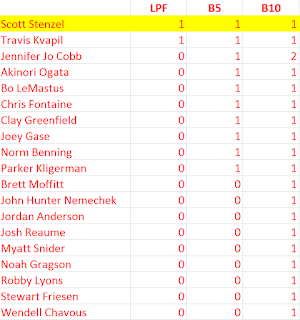