Gray Gaulding picked up the 2nd last-place finish of his Monster Energy NASCAR Cup Series career in Sunday’s Folds of Honor QuikTrip 500 at the Atlanta Motor Speedway when his #23 Earthwater Toyota fell out with steering problems after 99 of 334 laps.

On February 9, the night before his 20th birthday, Gaulding was contacted by BK Racing with an offer to make his first start in the Daytona 500. He arrived to the only unsponsored car in the garage area, a plain white #23 Toyota. The team, BK Racing, had last year signed Gaulding along with fellow rookie Corey LaJoie to drive for their two-car operation. Gaulding struggled through the season, averaging just over a 31st-place finish, but survived the fall race at Talladega to bring his battered car home 9th. At Daytona, with returning sponsorship from Earthwater, Gaulding survived again, finishing 20th in the Daytona 500.

It was later announced that Gaulding would continue to drive for BK Racing, both Sunday’s race at Atlanta and beyond. Once again, he arrived to an unsponsored car – this time flat black with a white hood and roof, the teal door numbers practically invisible and the headlight decals placed too low on the front valence. The car was once again re-wrapped in the same Earthwater scheme from Daytona, though this time with the rear TV panel still an undecorated flat black. Gaulding also struggled for speed. He ran 33rd of 35 drivers in Friday’s opening practice, qualified 31st with a lap of 178.269mph (31.099 seconds), then ran 34th in Happy Hour.

Gaulding would join NASCAR’s first 36-car starting lineup since 1996, and the shortest Cup field since 1976. For the first time since the RTA’s controversial Charter program was introduced, no Open teams – including all four that started the Daytona 500 – would fill out the 40-car field. Taking the 36th and final starting spot was XFINITY Series regular Harrison Rhodes, set to make his Cup debut in Rick Ware Racing’s #51 Davis Roofing / ICE Chevrolet. Both Rhodes and defending series champion Martin Truex, Jr. had been unable to turn a lap in qualifying when their cars failed to pass technical inspection.

After a brief rain delay, Rhodes and Truex were joined at the rear by last week’s 500 winner Austin Dillon, who had a new rear gear on his #3 Dow Chevrolet. With one lap to green, Dillon was himself passed for last as three more drivers voluntarily went to the back of the line. First to fall back was Rhodes’ fellow JD Motorsports driver Ross Chastain, returning to the #15 Low T Center Chevrolet for Premium Motorsports (the team’s Chartered team that had also fielded Danica Patrick’s #7 last week). Next came Jeffrey Earnhardt, who welcomed back Daytona sponsor VRX Simulators on Derrike Cope’s #00 Chevrolet. Last was Rhodes himself, who lined up in front of Earnhardt and Chastain with Chastain in 36th.

On the break, Rhodes was split by Chastain up high and Earnhardt down low in a daring three-wide pass. Stuck in the middle, Rhodes throttled back to take last, then went in pursuit of new 35th-place Earnhardt. By Lap 4, Rhodes was closing in on him, following the #00 in the middle lane. On Lap 9, Earnhardt ran high, and Rhodes nearly got by. Rhodes succeeded three laps later with a move down low in Turn 4, dropping Earnhardt to last. By Lap 16, Rhodes had left Earnhardt behind by over two seconds, and Earnhardt’s #00 was already in danger of losing a lap to the closing leaders, then Ryan Newman and Kyle Busch.

Gaulding entered the last-place battle on Lap 17, when he pulled down pit road complaining of a steering issue. The crew worked to diagnose the issue and sent him back out on Lap 23, now five circuits down to the leader. By doing so, Gaulding edged Earnhardt, lapped by the leaders on the 19th circuit, for being the first driver to go down a lap. Earnhardt himself made an unscheduled stop on Lap 30 when his right-front tire came apart, damaging part of his fender. This incident cost Earnhardt three laps, but he was still two circuits ahead of Gaulding.

Gaulding’s handling issues grew worse, forcing a second green-flag stop on Lap 53. Gaulding’s PR feed tweeted that the crew was looking under the dashboard to diagnose the issue. Gaulding returned on the 57th circuit nine laps down, then lost a tenth as he got up to speed. Just past the 100-lap mark, the car was still not handling. Chris Knight reported that Gaulding couldn’t get the car into first gear. Matt Weaver said Gaulding was so unhappy with the car that he was discussing going to the garage. By Lap 110, Gaulding had, in fact, pulled behind the wall, where the crew was still under the hood trying to diagnose a faulty power steering issue. The team’s PR indicated that the crew was also looking over the steering linkage and the steering column, even after the car disappeared from NASCAR’s RaceView on Lap 145. Ultimately, the car never returned to the track, and Gaulding was listed the first out during Stage 3.

Finishing 35th was Trevor Bayne, the day’s only other retiree, after the engine on his #6 AdvoCare 25th Anniversary Ford erupted in a massive plume of white smoke on Lap 298. Jeffrey Earnhardt and Harison Rhodes were the next two in line, finishing under power 20 and 15 laps down, respectively. Rounding out the group was Daytona 500 runner-up Darrell Wallace, Jr., whose #43 NASCAR Racing Experience Chevrolet struck a slowing Ricky Stenhouse, Jr. during the Bayne caution, destroying the left-front fender.

LASTCAR STATISTICS
*This marks just the second last-place finish for car #23 in a Cup Series race at Atlanta. The only other time occurred on October 27, 2002, when Hut Stricklin’s #23 Hills Brothers Coffee Dodge fell out with engine trouble after 164 laps of the MBNA America 500. The number’s most recent last-place finish in Cup was July 23, 2017, when Corey LaJoie’s turn in the #23 Dr. Pepper Toyota ended with a crash after nine laps of the Brickyard 400.
*Gaulding is the first driver to finish last in a Cup race because of steering issues since Cody Ware in this same race last year. 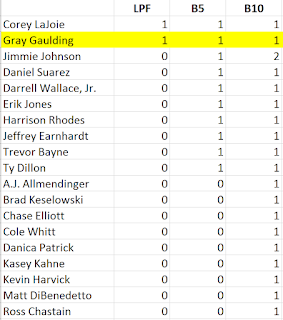