Corey LaJoie picked up the 3rd last-place finish of his Monster Energy NASCAR Cup Series career in Sunday’s 60th Annual Daytona 500 at the Daytona International Speedway when his #72 Schluter Systems Chevrolet fell out with a blown engine after he completed 8 of 207 laps.

At this time last year, LaJoie was embarking on his rookie season, making his first Cup start since a two-race stint with Humphrey-Smith Motorsports in 2014. Driving the #83 Dustless Blasting Toyota from BK Racing, LaJoie didn’t make friends early, wrecking Reed Sorenson in his Duel to transfer into his first Daytona 500. A crash coming onto pit road led to a 24th-place finish, and a difficult freshman campaign. Other than an 11th-place finish in his return to Daytona in July, he never again finished inside the Top 20.

While BK Racing filed Chapter 11 bankruptcy this past Thursday, ultimately fielding just one of their two Toyotas in the Daytona 500, LaJoie had already made the move to another team. He tweeted in January that he would be driving a Chevrolet, but it wasn’t until just days before SpeedWeeks that he was announced as the driver for TriStar Motorsports, sharing the ride with 2017 driver Cole Whitt. The Daytona car would carry sponsorship from Schluter Systems, which backed BK Racing in a number of races last year.

SpeedWeeks 2018 began on a rough note when TriStar Motorsports’ hauler didn’t arrive in time for sign-in day on February 9. Faced with a cut-off time of the next morning, the truck arrived in the middle of the night, ensuring that exactly 40 cars would fill the 40-car field. Without the need to race his way in, LaJoie turned the slowest lap in opening practice, then 38th and 16th in the next two sessions, skipped the fourth, and ran slowest of the 25 in Happy Hour. In between, he turned the first lap in qualifying – slowest of those completed at 186.058mph (48.372 seconds). He also ran a conservative race in Duel Race 2, finishing two laps down in 16th of the 20-car field. This secured him the 32nd spot on the 500 grid.

Starting last on Sunday was 66-year-old Mark Thompson, who was driving a former Richard Petty Motorsports Ford purchased by Carl Long’s team, Motorsports Business Management. The #66 Ford, sponsored by Thompson’s aeronautics company Phoenix Air, had computer issues early on. As the car warmed up on the grid, it didn’t report the water pressure. In the race, a cord had pinned down the antenna, causing interference on the radio. When asked to move the cord, Thompson replied “I’m afraid to touch anything.”

Making just his second Cup start since 1992, Thompson ran side-by-side with David Gilliland in the other former Petty Ford (now a backup #92 Black’s Tire Ford for Ricky Benton Racing). Gilliland got the advantage down the backstretch, and the crew instructed Thompson to follow in his tire tracks. Thompson attempted this, but by the second lap had already lost touch with the pack, more than 1.4 seconds behind the 39th-place car. Thompson was still bringing up the rear, and running by himself, when the first caution of the afternoon flew.

LaJoie was himself running near the back of the pack when his car started trailing smoke, forcing him to pull down to the apron. Under the ensuing yellow, LaJoie managed to drive his own car behind the wall, and the team brought out the generator to see what was going on beneath the hood. He was the first driver to lose a lap to the leaders. On Lap 11, someone on the crew said “We’re done,” and the team packed up, the first car done for the day.

The rest of the Bottom Five was filled by the first of three multi-car accidents on Lap 60. A blocking Ricky Stenhouse, Jr. narrowly saved his #17 Fastenal Ford entering Turn 3, but set up a four-wide logjam at the front of the pack. Contact between Kyle Larson’s #42 Credit One Bank Chevrolet and Erik Jones’ #20 DeWalt Toyota triggered a seven-car pileup. Receiving the most significant damage were Jones, the #19 Arris Toyota of Daniel Suarez, the #48 Lowe’s for Pros Chevrolet of Jimmie Johnson (his third wreck of SpeedWeeks), and the #13 GEICO Chevrolet of Ty Dillon. All four fell to the Bottom Five under the ensuing yellow.

Mark Thompson lost the first of four laps on the 25th circuit to finish 22nd, the best finish of his Cup career. His was the one of many intriguing storylines.

Locked in a side-by-side battle with Denny Hamlin was rookie Darrell Wallace, Jr., whose runner-up finish was the best by the #43 in the Daytona 500 since Richard Petty ran 3rd in 1987 (which itself was its best finish since Petty’s seventh win in 1981).

Chris Buescher finished 5th, his best run since he ran 5th in the Bristol night race in 2015.

David Gilliland gave Ricky Benton a strong debut of his own, steering the #92 Ford to a 14th-place finish.

And Jeffrey Earnhardt, whose StarCom Racing team finished no better than 32nd in its two previous starts, earned a 21st-place finish, five positions better than Earnhardt ran in last year’s 500.

CAMARO IN THE CUP SERIES
*This marked the first last-place finish for a Chevrolet Camaro in a Cup Series points race since August 28, 1971. That day, during the Buddy Shuman 276 at the Hickory Speedway, was the last Cup race held at the third-mile oval in North Carolina. That day, Camaros were distinguished from other Chevrolets in the field as the race featured a mix of full-sized machines and smaller “pony cars,” including Mustangs and Javelins. Taking last was Dick Brooks, who started the year driving for Mario Rossi’s Dodge team. When Rossi stopped entering cars earlier that month, Brooks took the wheel of a 1969 Camaro, one of three in the field. Brooks’ #95 qualified 15th, but turned just 30 laps before overheating issues ended his race. While the second Camaro of Randy Hutchison also exited early with an oil leak, the third, driven by Tiny Lund, took the win by nearly a lap over Elmo Langley. 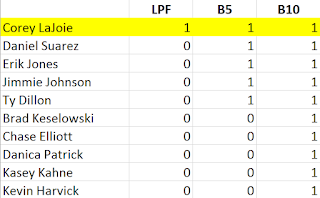