Ronnie Osmer finished last for the second time in his ARCA Racing Series career in Saturday’s Lucas Oil 200 Driven by General Tire at the Daytona International Speedway. The finish came as a result of Osmer’s No. 99 Hub International / Max Force Racing Ford losing the engine and wrecking after 20 of the race’s 92 laps.

The finish came in Osmer’s second start. The other last-place finish when his No. 36 Bobby Hamilton Racing car failed to start at Salem in 2016.  It was the first time that the No. 99 trailed the field since Tom Woodin finished last at Berlin Raceway on August 9, 2014.

Osmer, hailing from Louisiana, is a veteran of the Southeast short track scene. Growing up in a racing family where his father raced, Osmer started at age three and after a short setback due to Hurricane Katrina, he progressed through go-karts, Bandoleros and super trucks, adopting the St. Jude’s Children’s Hospital as sponsor along the way. Osmer ran at a number of high-profile tracks like Five Flags Speedway before making his ARCA debut with Carter2 Motorsports in 2015, becoming the second-youngest driver to start an ARCA race (15 years, four months and a day) behind NASCAR Camping World Truck Series driver Justin Haley. When he is not racing, he attends Pope John Paul II High School and will attend Belmont Abbey College in the fall.

Osmer returned to the ARCA Racing Series this January, testing with Thomas “Moose” Praytor and his Max Force Racing team at Daytona. Praytor would run the team's primary No. 9 with Osmer in the nearly-identical No. 99.

As is the case every February, the ARCA entry list brought sweeping changes. A number of prominent drivers switched organizations or made debuts, and many teams started their ARCA efforts or expanded. Mullins Racing teamed up to field two cars using Hixson Motorsports’ owner points. Fast Track Racing fielded three cars due to alliances with Wayne Peterson and Chad Bryant. Patriot Motorsports Group, a team owned in part by former NFL All-Pro Shawne Merriman, jumped to the ARCA Racing Series after competing in NASCAR’s K&N Pro Series level. They would partner with Basham Racing to use the No. 34 owner points. Newly formed team DGR-Crosley would debut without Bo LeMastus, but instead a young Noah Gragson.

The initial entry list saw 41 cars, which would leave 40 on track due to Brandon Grosso being ineligible to race because of age restrictions on seventeen-year-olds. However, Chuck Walker and his No. 08 Kimmel Racing entry withdrew, leaving only 39 cars to race.

Natalie Decker took the pole in her No. 25 machine for Venturini Motorsports. She was followed by MDM Motorsports’ Zane Smith, his teammate Chase Purdy, Mason Mitchell Motorsports’ Max Tullman and another Venturini driver, Leilani Munter.

Scott Reeves turned the slowest lap in qualifying in his No. 69 Kimmel-Finney Racing machine (another new partnership). However, for reasons unknown to the author, ARCA credited Osmer, whose 37th-place lap was 2.5 seconds faster than Reeves, with the 39th and last starting spot. It all wouldn’t matter, as Reeves incurred a tail-end penalty after replacing the motor between qualifying and the race.

At the end of Lap 1, ARCA’s live timing and scoring showed Reeves down 20 seconds to the leaders, while Osmer had advanced to the 36th position. The leaders fell into line, and were doing so on Lap 21, when Osmer, out of touch with the draft, was being lapped. On the inside of turns three and four, the motor blew, sending cars above and below. After clearing the incident, Andy Seuss came down on Cody Rohrbaugh, triggering a crash that collected Gus Dean and Will Rodgers.

While initial reports indicated that the engine had blown, Max Force Racing later reported on Twitter that a chunk of bar from another car had ruptured the oil line, triggering flames. Osmer, already a lap down at the time of the incident, pulled behind the wall and was credited with last. The damage proved terminal for Rohrbaugh, and he finished 38th. Dean stayed on the lead lap, while Seuss eventually went five laps down making repairs and Rodgers spent 25 laps in the garage. Interestingly enough, Seuss finished nineteenth, clearing the last “Big One” by a lap thanks to overtime cautions laps. Rodgers, too, benefited from it, clearing the LeMastus / Quin Houff / Bryan Dauzat crash by a lap to finish 30th.

The next caution yielded the 37th-place finisher, as Grant Quinlan blew an engine on his Rette Jones Racing No. 30 on Lap 41. Naval Reservist Jesse Iwuji finished 36th after puncturing the oil cooler on his No. 34, an ailment that did not draw a caution flag.

Rounding out the Bottom Five was Ed Pompa, who got caught up in a Lap 47 crash that began when Dave Mader turned Daniel Sasnett, making his ARCA debut, in the grass. Sasnett came back up the track and collected Pompa and Andrew Belmont, son of longtime ARCA character Andy Belmont.

As the race went on, underdogs began showing more and more promise. Sean Corr led 16 laps before being wrecked out of the lead. Kirk Horton, another driver making his ARCA debut, was briefly inside the top-five. Willie Mullins emerged second from the last crash and fought through a slew of Venturini Motorsports cars on the final restart to keep it there. Andrew Belmont, driving Mullins’ second car, finished ninth. Belgian Jerry De Weerdt finished eleventh in his ARCA debut. Even the eventual winner, Michael Self, drove for JD Motorsports in 2015. 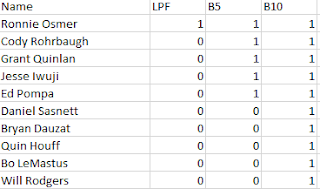 That article was spicier than my mamas casseroule.
I haven’t read anything that legit since ‘83 keep it up Bill