XFINITY: One week after his first Cup last-place finish, Gray Gaulding gets his first in XFINITY

Gray Gaulding picked up the 1st last-place finish of his NASCAR XFINITY Series career in Saturday’s Ticket Galaxy 200 at the Phoenix International Raceway when his unsponsored #93 RSS Racing Chevrolet fell out with electrical problems after he completed 6 of 200 laps. The finish came in Gaulding’s seventh series start.

Gaulding was originally scheduled to run double-duty at Phoenix. The preliminary entry list was updated earlier in the week to show he would return to BK Racing’s #83 Earthwater Toyota, the same car that he finished 40th with last Sunday at Texas. But on Thursday, the car was withdrawn, and the Earthwater branding ran as an associate on teammate Corey LaJoie’s #23 Fresh Beards Toyota.

In place of the Cup effort, Gaulding continued his role as a “start-and-park” driver in the lower series. He was first tabbed by Premium Motorsports in September after owner Jay Robinson acquired the assets of Tommy Baldwin Racing, including the trucks originally prepared for Stewart Friesen. He’s since made four starts in the renumbered #15 Chevrolet with a best of 25th and a next-to-last-place finish at Martinsville.

The next offer came from RSS Racing, which had so completely dominated this year’s LASTCAR XFINITY Series Championship with last-place record holder Jeff Green. Teamed with Ryan Sieg, Green scored his 100th NASCAR last-place finish in the “start-and-park” #93 Chevrolet at Iowa. Gaulding was brought in at Dover in September to debut a second “start-and-park” car for RSS – a #38 Chevrolet – and ran 34th. At Charlotte in October, Green was moved to the #38 and Gaulding to the #93, just in time for Green to snag his 100th XFINITY Series last-place finish that night. Gaulding, whose #93 changed paint schemes from black-and-red to black-and-blue, ran 39th.

The RSS Racing driver lineup remained the same at Phoenix, where both Gaulding and Green were locked-in as among the forty drivers who arrived for the forty-car field. Gaulding was one of three drivers who didn’t participate in Friday’s opening session (where Green outpaced Ryan Sieg with the 25th-best lap), then put up the 32nd-best lap in Happy Hour. He then qualified 35th in the field with a lap of 125.672mph, one spot behind Green.

Starting last on Saturday was Carl Long, who this week took the controls of his own #13 OCR Gaz Bar Toyota. Long was the only driver in time trials to not complete a lap, and remained at the back when the leaders took the green flag. On the first lap, Brendan Gaughan spun in Turn 4, and Corey LaJoie – running double-duty in JGL Racing’s #24 Youtheory Toyota – spun himself in the chain reaction. While both cars avoided serious damage, LaJoie took last under the resulting caution, then followed 38th-place Gaughan and 39th-place Morgan Shepherd down pit road. Gaughan’s stop apparently took longer as he took last from LaJoie under the yellow on Lap 3. The next time by, Jeff Green then fell back to take last from Gaughan.

When the race restarted on Lap 5, Green passed Carl Long, putting the #13 to last for the second time in the race. On Lap 6, Gaulding made his move, falling back from 31st, then losing a lap as he headed to the garage. Before the second caution on Lap 24, Carl Long made an extended stop of his own, and appeared headed for a 39th-place finish before he returned to the track, dropping Mike Harmon to 39th in his #74 Ramjet’s Speed Shop Dodge. Long ended up 36th before citing electrical trouble. Jeff Green finished 37th, seven laps behind Long.

In between came 38th-place Brennan Poole, whose #48 DC Solar Chevrolet drew the second caution when he tangled with the lapped #8 AphaPrimeUSA.com Chevrolet of Caesar Bacarella, who was making his NASCAR debut. Poole struck the outside wall with the right-front, then returned to the track only to slam it again under yellow, ending his day along with his bid at the Championship Four.

LASTCAR STATISTICS
*Gaulding is the first driver other than Jeff Green to finish last in RSS Racing’s #93 since May 27, 2017, when Stephen Leicht had electrical problems early at Charlotte. 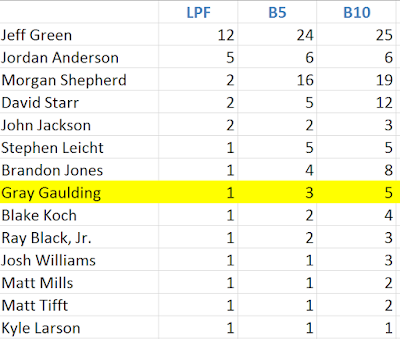