Mike Senica picked up the 3rd last-place finish of his NASCAR Camping World Truck Series career in Friday’s Lucas Oil 150 at the Phoenix International Raceway when his #57 Pennsylvania Power Products, Inc. Chevrolet fell out with electrical problems after he completed 3 of 150 laps.

The finish, which came in Senica’s ninth series start, was his third of the season and first since Chicagoland, six races ago. With one race to go, Senica is now tied with Todd Peck for the most last-place finishes in 2017. With the two drivers also tied in Bottom Fives and Bottom Tens, Peck leads the resulting Bottom Fifteen tiebreaker 10-9. If Peck starts the race, Senica will need to finish last to claim the 2017 LASTCAR Truck Series Championship. If Peck doesn’t start the race, Senica only needs to finish inside the Bottom Ten. That is, unless Joe Nemechek finishes last. Nemechek stands one finish behind Senica and Peck, but outmatches both drivers in Bottom Fives and Bottom Tens. Thus, Nemechek can take the championship if he finishes last at Homestead. Norm Benning has been eliminated from title contention.

Senica reprised his role in Norm Benning’s second truck, the black #57 Chevrolet, and arrived in Phoenix to sign autographs. According to Senica’s Twitter, one fan presented him with a custom model of his race truck. This weekend, Senica welcomed new sponsorship from Pennsylvania Power Products, Inc., whose P3 logo appeared on each quarter-panel.

Senica still struggled to find speed, however, as he ran slowest in practice with a lap of 110.933mph, nearly six seconds off session leader Todd Gilliland. LASTCAR reader Sam Laughlin reported that Senica also stalled at pit exit during the session, drawing a caution. He ran slower in qualifying at 108.180mph, just over seven seconds off Christopher Bell’s pole lap, and took last place on the starting grid.

Joining Senica at the back of the field were Austin Wayne Self, Mike Harmon, and Jesse Little, who were all sent to the rear for unapproved adjustments. Not among those penalized the #0 #0 Driven2Honor.org / Star Sales / Posi-Grip Chevrolet of Ray Ciccarelli, who had a scary moment in Friday’s opening practice. Heading down the backstretch, a possible fuel line failure in the right-front of the truck caused fire to blast from behind the wheel, filling the cockpit with smoke. Ciccarelli managed to pull his truck to a stop in Turn 4 and climbed out, but was clearly having difficulty breathing from the smoke. He managed to still qualify the truck 30th on the grid and finished 26th in the race, out with more engine problems.

Meanwhile, Senica regained last place in the early laps, then pulled out under the green flag with electrical woes. Finishing 31st was Ted Minor, who after racing for Faith Motorsprots at Texas this week moved to MB Motorsports’ #63 Chevrolet with sponsorship from Shawn Magee Designs. Minor ended his day three laps after Senica. Four laps after that came T.J. Bell, 30th in Al Niece’s #45 Niece Equipment Chevrolet. 29th went to Joe Nemechek in the #87 Fire Alarm Services Chevrolet. His son John Hunter Nemechek started second on the final restart, but wasn’t quite able to best Johnny Sauter for a chance at the Championship Four. Rounding out the group was Mike Harmon in his own #74 Beaver Strips & Custom Graphics Chevrolet, likely a backup after Tommy Joe Martins’ rough outing with the team at Texas.

LASTCAR STATISTICS
*This marked the first Truck Series last-place finish for the #57 in a race at Phoenix.
*If a Chevrolet finishes last at Homestead, the manufacturer will become the first in NASCAR history to score every last-place finish in a Cup, XFINITY, or Truck Series season. The previous Truck record was 20 finishes by Chevrolet, set in 2008 and matched in 2015. 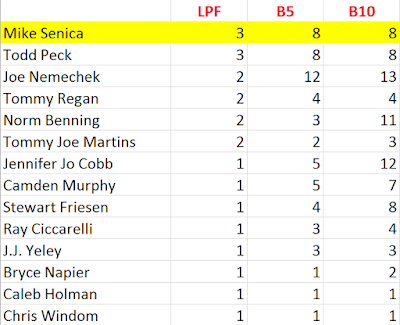