Tommy Joe Martins picked up the 4th last-place finish of his NASCAR Camping World Truck Series career in Friday’s JAG Metals 350 at the Texas Motor Speedway when his #42 Diamond Gusset Jeans Chevrolet was involved in a single-truck crash after 3 of 147 laps.

The finish, which came in Martins’ 28th series start, was his second of the season, his first since the season opener at Daytona, twenty races ago. Martins also put an end to a NASCAR record streak of six consecutive Truck Series races where the last-place finisher failed to complete a single lap.

It had been eight months since Martins last started a Camping World Truck Series race. In that time, he’d experienced the highest of highs and lowest of lows. His original plan had been to move his family’s team, Martins Motorsports, into the XFINITY Series. But rain at Bristol, then a DNQ at Richmond, kept his #45 Chevrolet from taking the green flag. He then found a home with B.J. McLeod’s XFINITY team, and promptly finished 29th at Pocono, his first XFINITY start since 2014. Two rounds later, on a night for underdogs, Martins finished a career-best 11th, just a few inches from his first Top Ten in NASCAR.

On the Truck Series side, after a 27th-place showing with Brandon Brown at Martinsville, Martins coordinated with other team owners to keep the team going. He first combined his effort with Faith Motorsports, a team that had struggled to make their series debut, and fielded entries for Matt Mills, Ted Minor, and Donnie Levister. During the summer, Austin Wayne Self climbed behind the wheel in a combined effort with AM Racing. The team also fielded a truck for J.R. Heffner at Eldora.

Unfortunately, the hard luck continued. Faith Motorsports’ entries finished no better than 17th. Self had a good run going at Las Vegas, only for his truck to be wiped-out in a crash with Travis Pastrana in the final fifteen laps. And when Heffner lost an engine in practice at Eldora, and the team wasn’t able to rent another from a different team, the dirt tracker was forced to withdraw.

Texas became a chance for a new beginning. On October 31, Austin Wayne Self had signed with Al Niece to drive his #45 Chevrolet for the rest of 2017 and the full 2018 schedule. Faith Motorsports was back for the first time in months, and would again field the #44, this time as tribute to the victims of the Mandalay Bay shooting. Martins would return to his Diamond Gusset Jeans machine, this time truck #42 – a team he had attempted to field for Matt Mills at Iowa before he was forced to withdraw.

But, just seconds into Friday’s opening practice, it all turned sour. On his very first lap, a possible right-front tire issue sent the #42 hard into the outside wall, flattening the passenger side of the truck and damaging the front valence. With exactly 32 trucks in the field and no chance of failing to qualify, the goal was to get back into the race at all costs. Unlike Eldora, this time a driver came to the rescue. Mike Harmon, who was already competing in Saturday’s XFINITY race, had brought his Chevrolet race truck to the track, and agreed to let Martins race it as a backup. The door numbers were changed from Harmon’s #74 to Martins’ white #42. As the only driver unable to turn a qualifying lap, Martins would start last – but most importantly, he would start.

Three drivers would join Martins in the rear, all of them for missing the driver’s meeting: Jordan Anderson, Gray Gaulding, and J.J. Yeley.

In the first laps of Friday’s race, Martins began to pass trucks, and by Lap 3, last place belonged to Mike Senica in Norm Benning's #57 Chevrolet. The next time by, disaster struck once more. Heading into Turn 1, the right-front let go, sending Martins even harder into the outside wall. As the first caution flew, Martins tried to slow the battered truck down, but still struck the inside wall before stopping at the apron. Martins dropped the window net and walked under his own power, but was understandably upset.

Finishing 31st was Joe Nemechek, who padded his Bottom Five total by pulling his #87 ROMCO Equipment Chevrolet behind the wall under Martins’ caution. Senica parked his #57 the next time by, taking 30th. 29th went to J.J. Yeley in MB Motorsports #63 Fr8 Auctions Chevrolet, while rounding out the Bottom Five was Ray Ciccarelli in Jennifer Jo Cobb’s #0 Star Sales Chevrolet.

LASTCAR STATISTICS
*This marked the first last-place finish for truck #42 in a Truck Series race since May 16, 2014, when Charles Lewandoski lost the ignition after 3 laps of the North Carolina Education Lottery 200 at Charlotte. Martins’ finish was the first for truck #42 in a race at Texas. 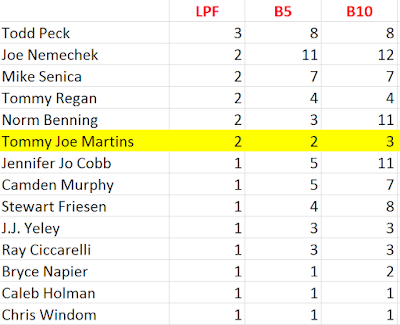