Ray Ciccarelli picked up the 2nd last-place finish of his NASCAR Camping World Truck Series career in Friday’s Ford EcoBoost 200 at the Homestead-Miami Speedway when his #10 Driven2Honor.org Chevrolet had engine problems that kept him from completing any of the race’s 134 laps.

The finish, which came in Ciccarelli’s sixth series start, was his second of the season and his first since New Hampshire, six races ago.

Ciccarelli was originally one of 33 entries on the preliminary list, but that list shrank back to 32 on Wednesday as Mike Harmon pulled his #74 Chevrolet. Ciccarelli was originally listed to run Cobb’s #0 Chevrolet, as he had in four of his previous five starts, but by Friday had been swapped over to the team’s primary #10 Chevrolet with Cobb herself running the #0. Ciccarelli’s best finish of the year had been in the Cobb team’s flagship #10, when he ran 22nd at Eldora despite a series of late-race spins. He’d run no better than 26th since, each time retiring in the first twenty-one laps.

Ciccarelli didn’t turn a lap in either practice session while Cobb turned just one lap in Happy Hour, anchoring the charts with a lap of 135.098mph, more than seven seconds off John Hunter Nemechek’s session-leading speed. Both Ciccarelli and Cobb didn’t turn a lap in qualifying, either, joined by Bayley Currey in D.J. Copp’s #83 Preferred Industrial Contractors Chevrolet. This put Currey, Ciccarelli, and Cobb in the final three positions.

The last-place headline for Friday was the three-way battle for the 2017 LASTCAR Truck Series Championship, the only title among the top three series to be decided in the season finale. Todd Peck came into the race with the lead, but wasn’t entered in the race. This left both Mike Senica and Joe Nemechek in position to take the title. Senica, tied with Peck on Bottom Fifteens, needed only a Bottom Ten to take the title. Nemechek, who had more Bottom Fives and Bottom Tens than either Senica or Peck, needed to finish last. Senica, carrying returning sponsorship from Pennsylvania Power Products, qualified 29th, one spot behind Nemechek. A LASTCAR poll run Friday on Twitter had Senica as the title favorite, receiving 82% of the votes.

Last-place starter Cobb incurred a redundant tail end penalty before the start of the race for unapproved adjustments. She was running alongside Ciccarelli at the start, and both trucks were already losing touch with the pack as the leaders took the green. By the time the field came back around, both trucks were already behind the wall. Although Cobb started one spot behind Ciccarelli and was sent to the rear, she was still classified ahead of her teammate.

The dual retirements of the Cobb trucks promptly eliminated Joe Nemechek from LASTCAR title contention as he could no longer finish last. Senica’s bid for a Bottom Ten was settled soon after. On Lap 3, Senica’s #57 was already 30th, eighteen seconds behind the leaders. Two laps later, he pulled his truck into the garage. While Senica indicated on Twitter that he pulled out with brake issues, forcing him to park earlier than the Benning team had planned, NASCAR listed the #57 as “parked” in the official results. Regardless of reasoning, the run was enough to steal away the 2017 LASTCAR Truck Series title from Todd Peck. It was the only week all season that Senica led the season standings.

Senica’s championship was the first by a rookie Truck Series driver since 1999, when Phil Bonifield took the title in Tom Mazzuchi’s #23 Red Line Oil Chevrolet. Bonifield’s mark of six last-place finishes remains tied for the most by a single driver in Truck Series history, equaled first in 2011 by Mike Garvey, and then again by Caleb Roark just last year. Roark’s title was his third in a row and the fourth-straight for Jennifer Jo Cobb Racing – the same team Ciccarelli drove for on Friday.

Rounding out the Bottom Five was title contender Joe Nemechek, three laps behind Senica in his #87 D.A.B. Constructors / fire Alarm Services Chevrolet. Senica’s title-clinching Bottom Five prevented Nemechek from becoming the first driver in NASCAR history to claim at least one LASTCAR title in both the Cup Series and the Truck Series. Behind him in 28th, one lap beyond, was Bayley Currey in the Copp #83.

LASTCAR STATISTICS
*This marked the first last-place finish for truck #10 in a Truck Series race at Homestead.
*Chevrolet became the first manufacturer in NASCAR history to sweep every last-place finish in a single season in any of the series’ top three divisions. 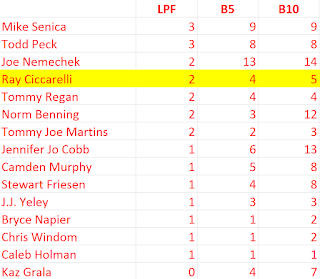