Kyle Larson picked up the 3rd last-place finish of his Monster Energy NASCAR Cup Series career in Sunday’s Can-Am 500(k) at the Phoenix International Raceway when his #42 Refresh Your Car! Chevrolet lost an engine after 104 of 312 laps.

The finish, which came in Larson’s 146th series start, was his first of the season, his first in a Cup Series race since March 20, 2016, when he crashed hard on the backstretch after 46 laps of the Auto Club 400 at the Auto Club Speedway of Southern California.

For all intents and purposes, Larson should have arrived at Phoenix ready to lock-up his spot in the Championship Four at Homestead. When the series last arrived in Arizona this past March, Larson finished a close second to Ryan Newman, his third-straight runner-up finish, giving him the point lead. He’d hold that lead for ten of the next thirteen races. Fontana marked the first of four wins in 2017, followed by a season sweep at the sister track in Michigan, then roared into the Playoffs by winning the final regular season race at Richmond.

Once the Playoffs began, Larson cruised through the first round with three consecutive top-five finishes. His performance dropped somewhat in the Round of 12 with a 10th at Charlotte and a 13th at Talladega, but arrived in the Kansas elimination race relatively safe, 29 points ahead of the cutoff. With a 13th-place run in qualifying, it seemed certain that Larson would join the Round of 8. Unfortunately, it didn’t end that way. Engine issues forced an unscheduled stop, then the power plant let go after only 73 laps. Were it not for the handling woes suffered by Derrike Cope’s new start-up team, StarCom Racing, Larson would have been handed his first last-place run of 2017. Still, the damage was enough – the blown engine knocked him out of the Playoffs.

Things didn’t get much better after that. He spun into the inside wall at Martinsville, then blew a tire and plowed the outside wall at Texas, handing him back-to-back 37th-place finishes to double his DNF count for the entire season. At Phoenix, Larson indicated he wanted to simply finish the race, if only to close out the year on a high note. It was perhaps appropriate, then, that he debuted a new primary sponsor from “Refresh Your Car!,” a clip-on air freshener for passenger cars.

Larson began the weekend 10th in Friday’s opening practice, then qualified 3rd at a speed of 137.926mph, making him the fastest non-Playoff driver in the field. He continued to show speed on Saturday, running 10th in the morning session, then 12th in Happy Hour.

Starting last on Sunday was Derrike Cope, whose StarCom Racing team was making its first start since Larson’s untimely engine failure at Kansas. Cope was also struggling with engine troubles at Phoenix, cutting their first practice short and preventing them from participating in qualifying. In the race, he was joined at the rear by Ricky Stenhouse, Jr., whose #17 Ford tribute to Robert Yates and Davey Allison changed tires after qualifying, and Corey LaJoie, whose BK Racing team changed engines and tires on the #23 Fresh Beards / Earthwater Toyota.

By the end of the first lap, Cope, Stenhouse, and LaJoie all passed Kyle Weatherman. Weatherman, who made his Cup debut two weeks ago at Martinsville, was again in Rick Ware Racing’s #51 Chevrolet, this time with the name and logo of Arizona Cardinals cornerback Patrick Peterson. According to Rick Ware’s Twitter, Weatherman struggled with suspension problems, causing him to rapidly lose ground to the leaders. He was already 6.391 seconds back on the first lap, 8.335 on Lap 2, then 18.832 on Lap 8. The 15th time by, leader Chase Elliott caught and passed him in Turns 3 and 4, dropping him a lap down. He lost a second on Lap 34, a third on Lap 50, a fourth by Lap 63, and a fifth on Lap 96.

While Weatherman lost laps, Kyle Larson looked to play spoiler. He took the lead for the first time on Lap 68, allowing him to snatch away a Stage 1 victory from a dominant Denny Hamlin. Larson led until Lap 79, but was still among the leaders when he made an unscheduled stop on Lap 105. Reminiscent of Kansas, the crew looked under the hood, costing him a lap to the leaders. He was then sent back out, but drove slowly on the apron, well out of traffic, with smoke reportedly coming from the back of the car. The lap, he made his way to the garage entrance in Turn 1. Larson climbed out, the engine problem proved terminal. On Lap 110, Larson took last from Weatherman, who endured through a pit penalty for carrying the fuel canister out of his box to finish 34th, eighteen laps down.

The rest of the Bottom Five was filled by accidents, each one caused by excessive brake heat. 39th went to Jimmie Johnson, who fell from Championship contention when his #48 Lowe’s Chevrolet cut a tire on the backstretch on the final lap of Stage 2. In 38th was Trevor Bayne, the nose of his #6 Ford EcoBoost Ford damaged in an early incident, who blew a tire at the exit of Turn 4, sending him hard into the outside wall. Bayne walked away, but did say he jammed his wrist. 37th fell to Chris Buescher, whose right-front brake rotor exploded out of the #37 Clorox Chevrolet, then backed into the wall. The heated brake pieces fell behind the SAFER barrier, igniting at least two pieces of protective foam. 36th went to Cole Whitt, whose #72 TriStar Motorsports Chevrolet bashed the fence in the final laps.

LASTCAR STATISTICS
*This marked the first last-place finish for car #42 in a Cup Series race at Phoenix.
*Larson’s 3rd-place start makes him the highest-qualified last-place finisher of the 2017 Cup Series season. The previous record was 6th, by Jamie McMurray at Martinsville and Erik Jones at New Hampshire.
*Larson is the first Cup Series driver to finish last after winning a stage. 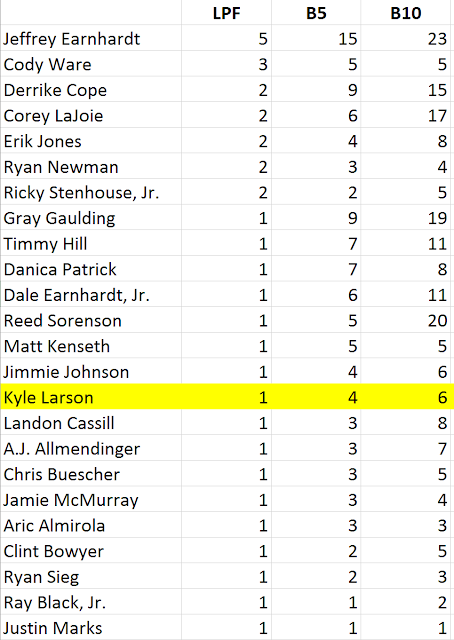 Well he still did do a pretty good job. Coming at 4 place was still a lot better than coming at last, and he even managed to win the hearts of his fans.