CUP: Joey Gase scores third last-place finish in as many seasons one day after final start with Jimmy Means Racing

Joey Gase picked up the 3rd last-place finish of his Monster Energy NASCAR Cup Series career in Sunday’s Ford EcoBoost 400 at the Homestead-Miami Speedway when his #83 Eternal Fan / Premier Millwright Toyota was involved in a single-car accident after 4 of 267 laps.

The finish, which came in Gase’s 22nd series start, was his first of the season and first in Cup since September 18, 2016 at Chicagoland, 45 races ago.

Homestead was the site of a number of dramatic endings, not the least of which the retirement of Dale Earnhardt, Jr. and what could also be the final races for Matt Kenseth and Danica Patrick. It’s also seen the end of several longstanding driver-team partnerships, including the end of Kasey Kahne’s term at Hendrick Motorsports, where he joined in 2012, Michael McDowell’s last turn at Leavine Family Racing, where he first ran in 2014, and Landon Cassill, who’s still looking for a new ride after his second season at Front Row Motorsports.

One of the longest relationships to end on the XFINITY side was driver Joey Gase with Jimmy Means Racing. Gase first drove for Means at Iowa on May 20, 2012, when Gase was driving for Go Green Racing (fielded by Archie St. Hilaire, the current owner of the #32 Go FAS Racing team in Cup). When interviewed for my upcoming book on J.D. McDuffie, Means reflected on how he met with Gase.

“When [Gase] drove for Archie St. Hilaire the 79 car in XFINITY, he was renting that ride and I know he ran well and didn’t tear his stuff up.  And when the money ran out with Archie, basically was rent-a-ride if you wanted to drive the car you paid money, and I’m an old school racer so we don’t make a dime but we race, that’s our downfall.  But somebody introduced me to him and Joey was able to find some money so it kind of helped keep both of us going, so it’s been a good relationship, it’s kept him in it, kept me in it.”

Helping the team bring in a number of sponsors, most notably the Donate Life organ donor program, Gase helped Means to the #52 team’s first full XFINITY season in 2014, finishing 20th in points. The team’s best run that year came at Talladega, where they also led their first lap. When they returned to Means’ home track the following year, Gase kept his overheating Chevrolet in the lead pack, and carved out a 5th-place finish. It was Means’ first Top 5 in NASCAR, a proud moment for a driver whose best finish in 455 Cup starts over two decades was a 7th at Talladega in 1983.

Gase has continued to run strong on the restrictor plate tracks, finishing 7th and 10th in this year’s races at Daytona and 16th at Talladega. But on October 19, it was announced that Gase and Means Racing would part ways amicably at the end of the season.

The two parted ways as Gase has focused more on making it to the Cup Series, where he reunited with Archie St. Hilaire in 2014. This season saw Gase make more Cup starts than in any previous season – nine -  including his first Daytona 500 with BK Racing. He also drove for Premium Motorsports, finishing a season-best 21st at Talladega and a 26th at Indianapolis.

Gase wasn’t originally slated to run Sunday’s race. The preliminary entry list showed that BK Racing wasn’t going to enter the #83 Toyota, while Premium Motorsports’ #7 Chevrolet, Gase’s ride from the last two weeks, was going to be driven by fellow XFINITY regular Ross Chastain. But Premium ended up withdrawing the #7, resulting in Homestead’s first short field for the Cup finale, and BK entered the #83 for Gase on Wednesday. Although Gase’s car was first listed with Earthwater as the sponsor, as it had when Gray Gaulding finished last at Texas, Phoenix sponsor Eternal Fan, also based in Iowa, signed to sponsor the car. Premier Millwright also joined the effort, sponsoring Gase’s run in Cup as well as his final start for Means on Saturday.

Gase began the weekend running 37th in Friday’s opening practice, then qualified 35th in the field with a lap of 164.654mph. He ran 38th in Saturday’s first session and 37th in Happy Hour. In between, he started 32nd in the XFINITY finale and brought Jimmy Means’ car home under power, five laps down, in 29th.

Starting last on Sunday was Ray Black, Jr., another XFINITY regular looking to break into Cup. Homestead saw Black make his third Cup start of the season, closing out Rick Ware Racing’s return season to the Cup Series. By the time the cars were pushed out to the grid, however, his #51 ScubaLife Chevrolet was already ahead of two cars.

Behind Black on pit road were two of the day’s biggest stories: the #20 DeWalt Hurricane Relief Toyota of Matt Kenseth and the #88 Axalta Chevrolet of Dale Earnhardt, Jr. Earnhardt had been moved back there in anticipation of leading the field during a special fourth parade lap. Earnhardt then asked NASCAR if Kenseth could join him, at which point the #20 lined up in front of his car. Curiously, Earnhardt was the only driver to incur a pre-race penalty, having been forced to change engines on Friday.

By the time the field took the green, Earnhardt was already passing cars, and had made his way to 30th after the first lap. Black, on the other hand, lost touch with the rest of the field with a slow start, and was back to last by the first set of corners. He was 3.864 seconds behind the leader after Lap 1. With two laps complete, the spot fell to Corey LaJoie, Gase’s teammate in the #23 myfreedomsmoke.com Toyota. According to BK’s Twitter, LaJoie was forced to make an unscheduled stop for a flat right-rear tire, putting him a lap down. Three laps later, trouble would find the second BK car.

With four laps complete, Gase was running in 35th ahead of Reed Sorenson. As the pair headed into Turn 1, Gase’s car cut sharply to the right, reportedly due to a flat right-front tire, and smacked the wall hard. This drew the day’s first caution, and Gase managed to just barely get his car back to pit road. With the steering tweaked and the passenger side pancaked, the team’s day was done, and the car was promptly pushed behind the wall.

37th went to Danica Patrick, whose final start for Stewart-Haas Racing did not go to plan. A flat tire caused her to lose control in the outside of Turns 1 and 2, and her #10 Aspen Dental Ford smacked the outside wall before being rear-ended by Kasey Kahne. Patrick reported earlier in the week that she will “cap it off” with next year’s Daytona 500 and Indianapolis 500, but there is no news as of yet who she will drive for.

In 36th was David Starr, back in one of Motorsports Business Management’s Chevrolets after BK Racing lent Carl Long’s team a car last week in Phoenix. Starr was running a handful of laps down in the final 100 laps when the left-front brake rotor failed. The debris didn’t cause a caution – or a fire, in the case of Chris Buescher last week – but did leave a small puncture in the right-front fender of Playoff contender Kevin Harvick’s Ford.

The 2017 Monster Energy NASCAR Cup Series Championship went to Martin Truex, Jr., the first for both the New Jersey driver and his Denver-based team, Furniture Row Racing. Truex has six last-place finishes – none this season – including one in the fall Phoenix race in each of the last three election years. Furniture Row Racing has nine last-place finishes and took the 2008 LASTCAR Cup Series title with Joe Nemechek, who trailed three races that season and edged A.J. Allmendinger on a Bottom Five tiebreaker, 9-6. Congratulations to both Truex and Furniture Row on coming so far this past decade.

LASTCAR STATISTICS
*Gase has now finished last in exactly one Cup Series race in each of the last three seasons.
*This marked the first last-place finish for car #83 in a Cup race at Homestead.
*Gase’s four laps complete are the second-fewest for a last-place finisher in a Cup race at Homestead. The fewest was 0 laps in 2004, after Hermie Sadler’s #02 Drive For Diversity / Sam Bass Chevrolet was eliminated in a multi-car accident at the start of the Ford 400. 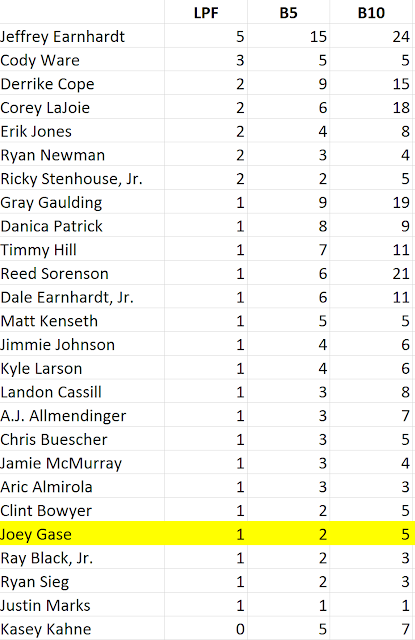