Jeff Green picked up the 99th last-place finish of his NASCAR XFINITY Series career in Saturday’s Drive Sober 200 at the Dover International Speedway when his unsponsored #93 RSS Racing Chevrolet was involved in a multi-car accident after 4 of 200 laps.

The finish, which came in Green’s 475th series start, was his tenth of the season and second in a row. With five races to go, Green has locked-up the 2017 LASTCAR XFINITY Series championship, defeating fellow RSS driver Jordan Anderson, absent from the series since June. It’s the record-breaking sixth LASTCAR title of Green’s career, breaking the mark set by the late J.D. McDuffie with five. Next Friday at Charlotte, Green will have his first opportunity at becoming the first driver in NASCAR history to score 100 last-place finishes in a single series.

For the first time in 2017, Green would be joined by two teammates from the RSS Racing stables. With still another threat at the first short XFINITY Series field of 2017, the Sieg family’s team entered a second “start-and-park” entry, a near-identical #38 Chevrolet to Green’s, driven by Gray Gaulding. Green didn’t participate in Friday’s opening practice, then after stalling as he exited pit road, ran 35th in Happy Hour, just over seven-hundredths behind Gaulding. Green outpaced Gaulding in qualifying, taking 33rd with a lap of 148.356mph. Gaulding started last at 144.869mph, six-tenths behind the #93.

Joining Gaulding at the rear on Saturday was RSS’ full-race effort, Ryan Sieg’s #39 Midstate Basement Authorities Chevrolet, would join him at the back due to a radiator change. Also sent to the rear by penalty were Reed Sorenson, who missed the driver’s meeting prior to running double-duty in JD Motorsports’ #15 Stockley Tavern Chevrolet, Matt Tifft for a tire change on his #19 Comcast NBC universal Salute to Service Toyota, and Josh Bilicki in B.J. McLeod’s #78 Prevagen Chevrolet. Timmy Hill also fell back voluntarily prior to the start, pulling from 38th to last in the #13 TLC Resorts for Motorsports Business Management.

When the race started, Hill retained last place, 8.800 seconds behind the leader after the first lap, then 13.046 back on Lap 3 and 16.409 on Lap 4. The next time by, Gray Gaulding pulled his #38 to the apron, apparently done for the day. But on that lap, heading into Turn 3, trouble broke out. As Green worked his #93 into the Top 30, 15th-place starter Brandon Jones lost control of Richard Childress’ #33 Anderson’s Pure Maple Syrup / Safeway Chevrolet. As Jones’ damaged car slid down the track, Green lost control and slammed into the back of Jones. The two made contact as David Starr tried to squeeze by between Green and the wall, knocking the left-front of Starr’s #99 Alarm Tech Systems Chevrolet into the wall. While Starr kept going, only to ultimately retire from the race three laps later, both Jones and Green’s cars were towed to the garage.

Similar to the Cup race at Pocono this past August, a strange scoring error ensued across the available digital leaderboards. On Lap 8, NASCAR’s cell phone app showed Green in last, one lap behind Jones, then on Lap 10 switched to show Jones in last, a circuit behind Green. NASCAR.com’s leaderboard showed Green in last, but with five laps complete to Jones’ four. NBC’s broadcast showed Jones in last with Green 39th. Only when the final results were published after the race did they show both Green and Jones with four laps complete and Green correctly in last based on the two drivers’ running positions the previous completed lap.

LASTCAR STATISTICS
*This was Green’s sixth XFINITY last-place finish at Dover and his second season sweep, joining 2015.
*This marked Green’s first XFINITY Series last-place finish because of a crash since August 2, 1996, when his #3 GM Goodwrench Service Chevrolet (fielded by DEI) tangled with Curtis Markham and Todd Bodine after 8 laps of the Kroger 200 at Indianapolis Raceway Park. That finish, one of just four due to an accident, was the eighth of Green’s XFINITY career. 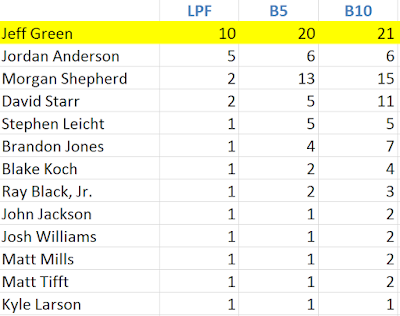