Chris Windom picked up the 1st last-place finish of his NASCAR Camping World Truck Series career in Saturday’s Texas Roadhouse 200 at the Martinsville Speedway when his #63 Baldwin Brothers Chevrolet fell out with engine trouble without completing any of the 200 laps. The finish came in Windom’s second career start.

This marked the sixth-straight race where the Truck Series last-place finisher failed to complete a single lap, doubling the previous NASCAR record of three coming into 2017.

Coming into 2017, Windom had ten years’ experience in all three of USAC’s national touring series – Silver Crown, Sprint Car, and Midget – as well as eight ARCA starts with half of them on dirt tracks, earning a series-best 3rd in his debut at the Illinois State Fairgrounds in 2011. This made the 26-year-old from Canton, Illinois a natural choice to make his Truck Series debut at Eldora this past July. Windom had twenty USAC starts on Tony Stewart’s oval, and picked up a good ride with longtime Truck Series owner Mike Mittler at MB Motorsports.

Windom brought with him sponsorship from Baldwin Brothers and Fox Paving, which each backed his open-wheel efforts. The logos would adorn Mittler’s #36 Chevrolet, teamed with Bobby Pierce, who came within a few laps of winning the two previous Truck Races on the dirt track, in a near-identical #63. The result saw both Windom and Pierce involved in the race’s first caution on Lap 6, then recover to finish 19th and 6th.

Windom’s next Truck Series attempt came at Bristol in August, his first paved track start in a national touring series since September 26, 2015, when he finished 8th in an ARCA race at Kentucky. He ran 24th and 23rd in practice, but ended up one of two trucks to DNQ, edged by Austin Wayne Self by just over two-tenths of a second. Martinsville would see Windom’s first Truck Series attempt since then, with him moving to Mittler’s primary #63, which has also split time with D.J. Copp’s start-up team. The #36, this time set to be a Copp entry, was withdrawn with LASTCAR leader Todd Peck the listed driver.

By Friday, two more trucks had withdrawn: Jennifer Jo Cobb had pulled her second truck, the #0 Driven2Honor.org Chevrolet to be driven by Matt Mills, and young Dawson Cram turned twenty laps in his family’s #11 Bojangles’ Fluidyne High Performance Chevrolet, anchoring the first session and improving to 27th in Happy Hour. With the entry list pared down from 36 to 33, just one truck would be sent home. By driving the full-time #63, Windom would be locked-in. Sent home was ARCA racer Mike Senica in Norm Benning’s #57 Chevrolet.

Windom turned in thirty-two laps in Friday’s opening session, ranking 27th, and he held serve in 26th in Happy Hour. However, even though he was guaranteed a starting spot, qualifying was still an obstacle. This time, the car struggled with engine trouble, managing a lap of just 65.086mph, nearly ten full seconds off the pole speed set by Chase Briscoe. In comparison, Mike Senica, who has struggled with speed in each of his attempts, ran a lap of 76.125mph, more than four seconds faster than Windom. The MB Motorsports crew set to work on the engine, but apparently couldn’t get it fixed in the short time leading up to Saturday’s race.

When engines fired, Windom’s truck was apparently pushed to the garage area, his retirement counted as an engine failure instead of a “did not start.” Late model driver Bayley Currey, making his Truck Series debut in Beaver Motorsports’ #50 Preferred Industrial Contractors Chevrolet, made a pit stop during the pace laps, surrendering his 27th-place starting spot. He started at the rear along with Gray Gaulding, who missed the driver’s meeting in his double-duty weekend with Cup and Trucks. Gaulding ended up 31st, citing electrical trouble on Premium Motorsports’ #15 Chevrolet.

30th went to Playoff contender John Hunter Nemechek, who once again found himself the victim of an early crash, this time backing his #8 Fire Alarm Services Chevrolet into the Turn 2 wall. 29th fell to Austin Wayne Self, back with Martins Motorsports (listed owner as Shane Lamb), who lost the engine on the #44 AM Technical Solutions Chevorlet. Rounding out the Bottom Five was Jennifer Jo Cobb, who broke an oil line on her #10 Driven2Honor.org Chevrolet.

LASTCAR STATISTICS
*This marked the first last-place finish for truck #63 in a Truck Series race at Martinsville. 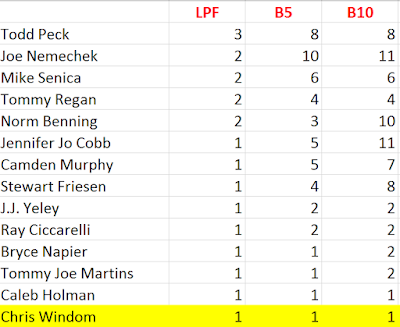