Jeff Green picked up the 97th last-place finish of his NASCAR XFINITY Series career in Friday’s Virginia 529 College Savings 250 at the Richmond Raceway when his unsponsored #93 RSS Racing Chevrolet fell out with electrical issues after he completed 8 of 250 laps.

The finish, which came in Green’s 472nd series start, was his first since Road America, two races ago, and his series-leading eighth of the 2017 season.  With eight races to go, Green has a three-finish lead over Jordan Anderson, who he replaced at RSS Racing earlier this season, and is just three finishes away from becoming the first driver ever to score 100 last-place runs in any one of NASCAR’s top three divisions.

A couple notes on Green’s ride with RSS Racing.  Last week at Darlington, I observed that the #93 team’s pit stall had no tires on hand and no pit box, only a small generator cart from teammate Ryan Sieg.  The Chevrolet itself has Green’s name on the roof and above the rear window, but the car number decal on the nose is itself a square black decal, likely covering the original #39 of his teammate.  The team’s jack stands also appear to be from BK Racing as the #93 decals on each resemble the team’s italic number font used prior to 2015.  Most significantly, Green is heavily involved with his team.  For last week’s interview, we caught up with the driver as he helped his crew push his car through the inspection queue.

Green began the Richmond weekend 28th in Friday’s opening practice, then improved one more position in qualifying, taking the 27th spot on the grid with a lap of 117.483mph.  With 41 drivers on the entry list (following the early withdrawal of GMS Racing’s #96 for Ben Kennedy), the only driver sent home after time trials was Morgan Shepherd.  Shepherd’s lap of 115.183mph was faster than seven other drivers who started the race, but fell less than eight-hundredths short of the sixth car he needed to beat – 33rd-place Reed Sorenson and his lap of 115.523mph.  It was Shepherd’s first DNQ since last month’s Bristol night race.

Starting last on Friday was Kerry Earnhardt’s son Bobby Dale Earnhardt, who following a DNQ at Iowa made his series debut in Motorsports Business Management’s #40 TLC Resorts / Circle C Ranch Chevrolet.  Earnhardt made the field despite running the slowest lap in time trials, nearly two full seconds behind the DNQ’d Morgan Shepherd.  He was joined at the rear by both Dakoda Armstrong and David Starr, each sent to the rear for unapproved adjustments.  Early in the opening green flag run, which ended with Earnhardt crashing out of the race on Lap 53, Green was the first driver to pull into the garage.

Finishing 39th was Reed Sorenson, whose #15 Flex Seal Liquid Chevrolet shook off the transmission issues of a week ago, turned in the fastest lap of those locked-in on speed, then parked nine laps after Green.  38th went to Timmy Hill, who with Earnhardt in the #40 returned to MBM’s #13 OCR Gaz Bar Dodge.  37th fell to John Graham of Canada, who after returning to the series with Mike Harmon at Road America piloted B.J. McLeod’s #78 Magellan Aviation Group Chevrolet before rear gear trouble.  Rear gear issues also ended the night of 36th-place Joey Gase, who was running 24th when he fell out in the final 100 laps.  It was a rough weekend for Gase, who also broke a brake rotor in practice. 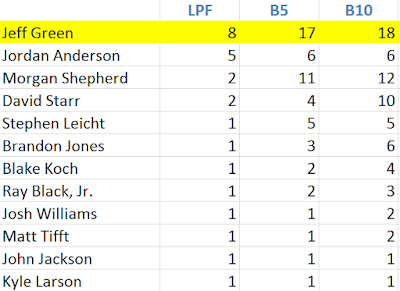