Mike Senica picked up the 2nd last-place finish of his NASCAR Camping World Truck Series career in Friday’s TheHouse.com 225 at the Chicagoland Speedway when his unsponsored #57 Norm Benning Racing Chevrolet fell out with rear gear trouble without completing any of the 225 laps.

The finish, which came in Senica’s fifth series start, was his second of the year and first since Pocono, four races ago.  With seven races to go, Senica joins what is now a four-way tie for the 2017 LASTCAR Truck Series lead, and is tied with Tommy Regan for the third seed.  The LASTCAR title leader is now Joe Nemechek, who takes the lead for the first time in 2017 on a Bottom Ten tiebreaker with Todd Peck, 8-7.  Nemechek, a two-time LASTCAR Cup Series Champion, looks to become the first driver in NASCAR history to claim LASTCAR titles in both Cup and Trucks.

The 51-year-old wrestler turned racer has remained with Norm Benning Racing since his Pocono last-place finish.  He ran 27th of 30 at Michigan, failed to qualify for the first time at Bristol, then ran third from last once more at Canadian Tire Motorsports Park.  As at Pocono, Senica would run double-duty with the ARCA Racing Series and the Truck Series.  His weekend thus began in Wayne Hixon’s #3 Bell Plantation Chevrolet on Thursday night in ARCA’s Scott 150 on the 1.5-mile track.  That night, Senica started 26th in the 31-car field and finished 23rd, flagged off the track after 32 laps for running too slow.

Speed has remained an issue for Senica, despite his clear “start-and-park” duty for Norm Benning.  After he didn’t participate in Thursday’s opening practice, he turned a single lap in Happy Hour of just 123.873mph.  The lap was more than eight seconds slower than the next-slowest truck of Tommy Regan and nearly 13 seconds off the top speed by Johnny Sauter.  In qualifying, Senica picked up just over a second, securing the 32nd and final starting spot with a lap of 127.920mph.  Even then, he was still nearly seven seconds off the next-slowest truck of Jennifer Jo Cobb.

When the race started, it appeared that Senica’s did not as the NASCAR.com Leaderboard did not indicate a gap from the leader back to the #57, still classified last.  On Lap 2, Gray Gaulding in Premium Motorsports’ new second truck, the #15 Chevrolet, slowed to a crawl on the apron of Turns 1 and 2.  The caution wasn’t thrown until the next time by, at which point the #15 had barely made it to Turn 3.  From that point, FOX Sports 1’s broadcast would show Gaulding’s #15 in last behind Senica, an error that wasn’t corrected until the end of Stage 1.

While Senica never gave up last place that night, the rest of the Bottom Five changed through the first 100 laps.  It all began with another six drivers who appeared to have parked within the first 12 laps.  The first of these was Jennifer Jo Cobb, who was selected as one of the six drivers to carry a Nickelodeon and Teenage Mutant Ninja Turtles paint scheme.  Under the Gaulding caution, she pulled her orange #10 “Rebel Road” Chevrolet behind the wall, dropping her to 30th ahead of Gaulding and Senica.  She was joined on Lap 7 by Joe Nemechek in an all-black #87 D.A.B. Constructors Chevrolet, then three laps after by B.J. McLeod in Mike Mittler’s second truck, the #36 MB Motorsports Chevrolet.  On that same tenth lap, the caution fell for McLeod’s teammate Kevin Donahue, whose #63 Chevrolet hit the wall in Turn 2, placing him 27th.  The next time by, Mike Harmon pulled his #74 Chevrolet in, edging Tommy Regan, who parked Cobb’s #0 Driven2Honor.org Chevrolet.  At this point, everyone from 25th on back looked to be done for the day with only Donahue’s #63 out from a crash.  By Lap 16, the order of the “behind the wall gang” was as follows:

A few laps later, the three drivers listed as “off” returned to the track.  The first of these was Mike Harmon, who by Lap 17 was back out, six laps down.  He ended up turning just one circuit, moving him ahead of Tommy Regan before he cited transmission problems for his DNF.  The next was Gray Gaulding, who found himself in a similar position with Premium Motorsports at Kentucky after his #55 Cup car broke down on the opening lap.  There, as here, Gaulding returned to the track several laps down on the 61st circuit, allowing him to jump seven spots before fuel pump issues left him 25th.  Not long after, Jennifer Jo Cobb also came back on track, dropping Joe Nemechek to 31st.  In the end, she passed the entire group and edged Gaulding for 24th by two laps.

All this left Nemechek, McLeod, Donahue, and Regan – who didn’t return – to fill out the Bottom Five. 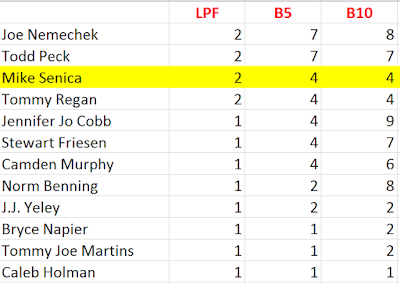 The Truck series last place race is just like the Supercars race, where Tim Slade and Will Davison are separated by a single bottom 3 finish.

Well he is an arrogant ass so the last place is well deserved. This guy has no place to be in racing. He is not much of a people person either. His social graces are lacking.