Ray Black, Jr. picked up the 1st last-place finish of his Monster Energy NASCAR Cup Series career in Sunday’s Tales of the Turtles 400 at the Chicagoland Speedway when his #51 ScubaLife Chevrolet finished under power, 16 laps down, after 251 of 267 laps.  The finish came in Black’s series debut.

Black, who earned his first XFINITY last-place finish at Talladega in May, has since made eight more starts in NASCAR’s second-tier division with a new career-best finish of 12th at Daytona in July.  The Commercial Diving Academy, which sponsored Black in the past, tapping into the driver’s passion for scuba diving in his native Florida, has also returned as the team’s sponsor, this time through the school’s underwater welding program.  While Chicagoland would see Spencer Boyd drive in place of Black in SS’s #07 Chevrolet for a second-straight XFINITY race, Black soon found another opportunity for the weekend – the chance to make his Cup Series debut.

For Sunday’s race, Black reunited with team owner Rick Ware, who gave Black his first XFINITY Series start at Texas in 2015.  The Ware team announced the partnership last Friday as an eleventh-hour entry, thus bringing the field from 39 cars on Monday to a full field by the opening practice.  The XFINITY Series driver’s Cup car would be black with the familiar ScubaLife branding from many of his Bobby Dotter-prepared cars, complete with blue waves on both doors.  Black would drive the car at Chicagoland, then rejoin the team again at Texas in November.

Black was slowest in Friday’s opening practice, his best of 18 laps a mere 165.654mph, nearly a second off the pace of second-slowest Timmy Hill and more than three seconds off the pace of session leader Kyle Busch.  He again anchored Happy Hour on Saturday, slipping to 165.315mph, four-tenths off the next-fastest Jeffrey Earnhardt and just under three seconds off Martin Truex, Jr.’s leading time.  His best lap ended up coming in qualifying – 170.218mph. Though eight-tenths off the next-slowest car of Timmy Hill and just under three seconds off Kyle Busch’s pole lap, Black would start his first race 39th in the field of 40.

Starting last on Sunday was Brett Moffitt, who returned to the Cup Series for the first time since his 32nd-place run last month at Michigan.  Moffitt rejoined BK Racing, which didn’t have drivers listed for either of its cars in the preliminary entry list, alongside Corey LaJoie in the #23.  Moffitt didn’t complete a lap in qualifying, so his #83 JAS Expedited Trucking Toyota started shotgun on the field.  He was joined at the rear by his teammate LaJoie, who was set to roll off 33rd but whose crew had made unapproved adjustments.

The race unfolded much like Michigan in June with a tight last-place battle among several tail-end cars.  Black had taken the last spot by Lap 10, and was soon in danger of losing a lap to the leaders.  The first driver to join him at the rear was playoff contender Ricky Stenhouse, Jr., whose #17 Fastenal Ford clipped the Turn 2 wall early, then was forced to make a pit stop for tire issues around Lap 33.  Stenhouse then was assessed a commitment cone violation for his sharp angle entering pit road, and returned to the race two laps down.

Green-flag pit stops followed soon after Stenhouse’s stop, and last place then fell to Gray Gaulding.  Gaulding, back with Premium Motorsports for the first time since the Bristol night race, drove Reed Sorenson’s “throwback” car from Darlington, the Bud Moore-styled numbers changed from #15 to #55.  The car also carried a large hood logo recognizing the U.S. First Responders Association.  By Lap 62, Black re-took last from Gaulding, and he was six laps behind the leaders near the end of Stage 1.  On Lap 123, during Stage 2, Black was still last, and had lost another two laps for a total of eight.

By Lap 140, all 40 drivers were still on the track, and the teams at the back of the field remained evenly matched.  On this particular circuit, Black was eight laps behind, one lap behind the next five drivers: 38th-place Gaulding, 37th-place Timmy Hill in Carl Long’s #66 U.S. Chrome Chevrolet, 36th-place Cole Whitt in TriStar Motorsports’ unsponsored #72 Chevrolet, and 35th-place Corey LaJoie.  Not long after, it appeared that Black made an extended stop on pit road or in the garage, as he jumped from eight laps behind to eleven, gapping the group behind him.  From there until the finish of the race, Black would maintain this three-lap advantage, preventing another change for last place.  He ultimately edged both Hill and Gaulding by those three circuits.  Rounding out the Bottom Five were Brett Moffitt, one lap ahead of Gaulding, and LaJoie, another circuit ahead of Moffitt.

LASTCAR STATISTICS
*This marked the incredible third consecutive year that the entire starting field for the Cup Series race at Chicagoland finished under power.  In 2015, last-placer Austin Dillon completed 198 of 267 laps, followed by 2016’s run by Joey Gase, where he turned 254 of 270.
*Black is also the second driver to finish last in his Cup debut this year, joining Cody Ware at Atlanta.  Ware also drove the #51 Chevrolet that day, which is owned by his father. 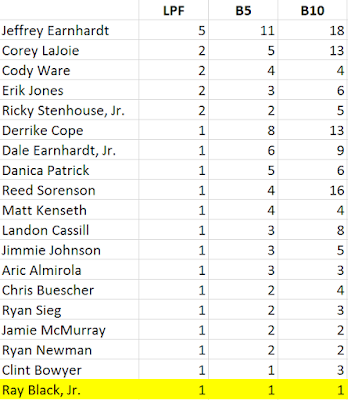