David Starr picked up the 2nd last-place finish of his NASCAR XFINITY Series career in Saturday’s Food City 300 at the Bristol Motor Speedway when his #99 Whataburger Chevrolet was involved in a crash after 11 of 300 laps.

The finish, which came in Starr’s 119th start, was his second of the season and first since the 2017 opener at Daytona, 21 races ago.

The second B.J. McLeod Motorsports team, this year a combined effort with SS Green Light Racing, has had Starr behind the wheel full-time.  After a difficult first seven rounds, Starr scored the team’s first Top-20 finish of the year at Richmond, the second race for the bright orange Whataburger paint scheme, where he finished 17th.  Following another season-best at Iowa in June where he ran 14th, Starr turned heads at Daytona in July.  That weekend, Starr was originally going to sit out the race with Korbin Forrister driving, but Forrister’s case of the flu put Starr back behind the wheel.  Despite a range of issues, including flight delays, a busted cool box, and a struggle to stay in the draft, Starr avoided a series of accidents and drove the #99 home in 5th – his first Top 5 in his 112th series start.

The 49-year-old Starr came to Bristol 21st in the XFINITY standings.  The track saw one of only two DNFs for the driver to that point (along with the last-place run at Daytona in February), a late-race crash that left him 36th.  Of the 42 drivers who arrived to attempt the 40-car field, Starr ran 34th in Thursday’s opening practice, 36th in Happy Hour, and fell back on Owner Points to secure the 36th spot on the grid after a lap of 119.940mph.  Two drivers missed the show.  The first was Reed Sorenson, who attempted to run double-duty in JD Motorsports’ “start-and-park” #15 Flex Seal Chevrolet.  The other was last week’s last-place finisher Morgan Shepherd, who was thus unable to re-tie Joe Nemechek for 2nd in the LASTCAR all-time rankings in his #89 Racing With Jesus / Visone RV Chevrolet.

Startign last on Friday was Mike Harmon, who returned to driving duties in his #74 Veterans Motorsports, Inc. Dodge.  He was joined at the start by two drivers sent to the rear for unapproved adjustments: Chad Finchum, making his own return in Motorsports Business Management’s #40 Smithbilt Homes / Buddy Gregg RV Chevrolet, and Joey Gase in Jimmy Means’ #52 Donate Life Tennessee Chevrolet.  On Lap 12, David Starr was running near the tail end of the field when the right-front tire went down in Turn 2, sending him hard into the outside wall.  The car pulled down pit road in a shower of sparks, then behind the wall, done for the night.  Jeff Green pulled his #93 RSS Racing Chevrolet behind the wall on the ensuing restart, leaving Green next-to-last for the second-straight race.

Next to fall out of the race were Aric Almirola in the #98 Fresh From Florida Ford and Ryan Reed in the #16 Lilly Diabetes Ford.  Heading into Turn 3 on Lap 25, Almirola and Reed found themselves on opposite sides of Spencer Gallagher’s #23 Allegiant Airlines Chevrolet when the three made contact, steering the three cars into each other.  While Reed and Gallagher managed to keep going, Almirola was done for the night.  Reed’s car was finished soon after the restart following a second wreck in Turn 4.  Rounding out the group was Timmy Hill, who debuted a new paint scheme on his #13 OCR Gaz Bar Dodge from The Motorsports Group.

LASTCAR STATISTICS
*This was the first XFINITY last-place finish at Bristol for both car #99 and Starr. 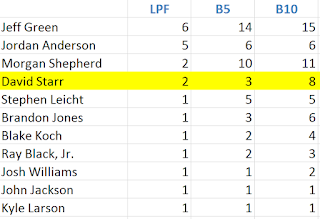