Joe Nemechek picked up the 2nd last-place finish of his NASCAR Camping World Truck Series career in Wednesday’s UNOH 200 at the Bristol Motor Speedway when his #87 D.A.B. Constructors Chevrolet fell out with a vibration after 3 of 203 laps.

The finish, which came in Nemechek’s 31st series start, was his second of the season and his second in a row.  For the second time in less than a week, he breaks the tie with Morgan Shepherd for the second-most last-place finishes in NASCAR history.  Shepherd was unable to defend as his XFINITY Series #89 failed to qualify on Friday.  Nemechek also sits 2nd in the 2017 LASTCAR Truck Series standings, trailing leader Todd Peck by a single Bottom Five.

Following his last-place run last week in Michigan, Joe Nemechek was once again on the entry list for Bristol, running a near-identical Chevrolet to his son John Hunter.  Unlike Michigan, however, Joe would have to qualify his truck on time as there were 34 total drivers seeking to make the 32-truck field.  Joe didn’t participate in Wednesday’s opening practice, ran a solid 25th of 32 in Happy Hour, and improved to 24th in qualifying.  Joe had put up the 20th-best time in Round 1, locking him into the main event, and sat on his speed in Round 2, leaving him four spots back.

Missing the race were dirt tracker Chris Windom, whose attempt at his first Truck Series race since Eldora fell short when he needed two tenths to get Mike Mittler’s #36 Baldwin Brothers Chevrolet into the race.  The other DNQ, Mike Senica in Norm Benning’s black #57 Chevrolet, managed a lap of just 85.910mph, just under eight full seconds slower than Kyle Busch’s pole lap.

Starting last was Jordan Anderson, whose #1 Capital City Towing / Lucas Oil Chevrolet had to rely on Owner Points to make the race.  After running 30th in Happy Hour, engine issues before qualifying prevented Anderson from making a timed lap.  The engine change kept Anderson at the tail end of the field, along with Stewart Friesen, who gave up 20th on the grid after he missed the driver’s meeting.  After just three laps, Joe Nemechek had slipped into the garage area, done for the night.

NASCAR strictly enforced their minimum speed rule on Wednesday, and two owner-drivers were flagged off the track for not keeping up the pace.  31st-place Norm Benning was slowest in Happy Hour, more than two seconds off Kyle Busch’s pace, and was parked nine laps after Nemechek.  30th went to Jennifer Jo Cobb, a half-second faster than Benning, who was flagged another 64 circuits later.  NASCAR also threatened to park Clay Greenfield, back in the series for the first time since Gateway, but he managed to come home 26th – under power – in the #68 Titan Paint Sprayers Chevrolet.

Rounding out the Bottom Five were Stewart Friesen, whose #52 Halmar International Chevrolet overheated at the halfway mark, and Daytona winner Kaz Grala, who lost the engine on GMS Racing’s #33 ChargeCords.com Chevrolet.

LASTCAR STATISTICS
*This marked the first last-place finish for the #87 in a Truck Series race at Bristol since June 23, 1995, when Joe’s brother John blew the engine on his Burger King Chevrolet after 3 laps of the Pizza Plus 150.  It was the first of two Truck Series last-place finishes for John, who tragically lost his life in a crash at Homestead in March 1997.  Joe’s son John Hunter is named in John’s honor. 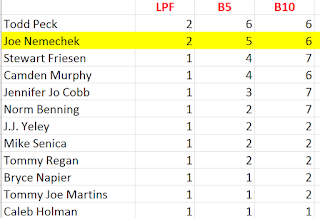