John Jackson picked up the 2nd last-place finish of his NASCAR XFINITY Series career in Saturday’s Overton’s 200 at the New Hampshire Motor Speedway when his unsponsored #72 Motorsports Business Management Chevrolet fell out with a vibration after 4 of 200 laps.

The finish, which came in Jackson’s 23rd series start, was his first of the season and his first in an XFINITY Series race since last summer at Iowa, 31 races ago.

Jackson wasn’t originally scheduled to compete at Loudon, but the entry list presented an opportunity.  Just 39 drivers made the preliminary entry list, threatening the first short field of the 2017 XFINITY Series season.  By Friday, however, Motorsports Business Management rolled a third car off their hauler to join the #13 OCR Gaz Bar Chevrolet of Carl Long and Timmy Hill’s #40 CrashClaimsR.us Dodge.  It was a second Dodge without sponsorship, #72.

The #72 is a remnant of a race team owned by Florida attorney James Carter, who fielded the entry part-time from 2011 through 2014.  Both John Jackson and Carl Long were among the drivers who made the team’s 16 appearances, all but one ending with an “start-and-park” effort.  It was Jackson who brought the #72 home under power for the only time at Atlanta on September 3, 2011, when his was the last car to finish under power in 31st.

By all accounts, Carter’s team has since been absorbed into MBM (the CrashClaimsR.us sponsorship now on MBM’s #40 links to Carter’s website), and the team has since been brought out to help fill fields.  Long first entered the car himself last September at Darlington, where Obaika Racing withdrew their #77 Chevrolet for a field of 39.  Jackson returned to the #72 Chevrolet that day and finished 39th, one lap ahead of last-place finisher Matt DiBenedetto.  Two other times that year, the #72 missed the cut – a withdrawal at Iowa and a DNQ at Kentucky.  Loudon would mark the team’s first 2017 entry since it was withdrawn earlier this year at Fontana.

Jackson didn’t participate in either of Friday’s practices, then turned in a qualifying lap of just 112.726mph – more than 4.3 seconds off the pole speed of 129.353mph set by race winner Kyle Busch.  This put Jackson 40th and last on the grid – one spot behind the backup car of Dylan Lupton, who wrecked his #24 Nut Up Toyota off Turn 2 during the first round of qualifying.  After four laps, Jackson pulled behind the wall, first out of the race.

39th went to Reed Sorenson, who finally put JD Motorsports’ fourth team - #15 – into the race after back-to-back withdrawals.  The team turned out to be a “start-and-park” entry similar to Jackson’s, exiting the event after 7 laps with brake issues as the listed cause.  The rest of the Bottom Five were filled with other LASTCAR contenders: 38th went to Jeff Green, whose championship leading #93 Chevrolet for RSS Racing carried sponsorship from HangNOut.com.  Morgan Shepherd finished 37th in his #89 Racing With Jesus / VisoneRV.com, out with suspension issues.  Rounding out the group was MBM’s #13 with Carl Long, whose day was done with electrical issues.

Next week at Indianapolis, MBM will be pulling double-duty as, in addition to their XFINITY Series efforts, the #66 Chevrolet returns to the Cup Series after a one-week hiatus.  The team has also unveiled its Darlington throwback entry for the Southern 500, which commemorates both Darrell Waltrip’s 2000 Victory Tour and Carl Long’s role in it.  When Waltrip failed to qualify for his final Coca-Cola 600, it was Long who let Waltrip drive his #85 Ford, foregoing his own Cup debut in the process.  Waltrip, who with brother Michael sponsored the #66 earlier this year, has been making a push on Twitter for someone to sponsor #66 this September.

LASTCAR STATISTICS
*This marked the first last-place finish for the #72 in an XFINITY Series race since November 10, 2007, when D.J. Kennington’s #72 Northern Provincial Pipe Lines Dodge for MacDonald Motorsports crashed after 7 laps of the Arizona Travel 200 at Phoenix.  The number hadn’t finished last in an XFINITY Series race at Loudon since June 30, 2007, when Randy MacDonald’s turn in the same car ended with handling issues after 12 laps of the Camping World 200 Presented by RVs.com.
*Jackson’s last-place finish is the first for a Dodge in the series since Chris Cook had suspension issues last August at Watkins Glen.  It’s the first last-place run for a non-Chevrolet this season – Ford and Toyota have yet to finish last in a 2017 XFINITY Series race. 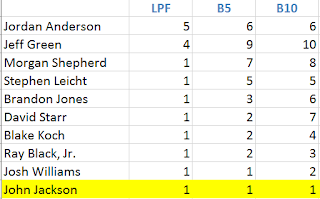 Finnally a non-Chevrolet in the last place!