Jeff Green picked up the 95th last-place finish of his NASCAR XFINITY Series career in Saturday’s U.S. Cellular 250 at the Iowa Speedway when his unsponsored #93 RSS Racing Chevrolet fell out with a vibration after he completed 3 of 254 laps.

The finish, which came in Green’s 466th series start, was his sixth of the season, his second in a row, and his 100th across NASCAR’s top three divisions (his other five coming in Cup).  With 14 races to go, Green now holds a one-finish lead over Jordan Anderson in the 2017 LASTCAR XFINITY Series Championship.

Green was originally slated to be one of 40 drivers to attempt the starting field for Saturday’s race.  However, when Morgan Shepherd entered his #89 Racing With Jesus Chevrolet, one team would be sent home.  Though Green was the only driver to not participate in Friday’s opening practice, in just two laps during Happy Hour, he secured the 29th-fastest lap of 40 drivers at 125.633mph.  The speed carried over into qualifying, where Green made Round 2 – improving even more to 21st with a lap of 128.545mph – then sat out the next round, securing him 24th.  The only team sent home was Motorsports Business Management’s #13 Crystal Clear Home Improvement Chevrolet, which was driven by Jeffrey Earnhardt’s brother Bobby Dale.

Starting 40th and last for the seventh time this season was Mike Harmon in Veterans Motorsports, Inc.’s #74 Dodge.  Harmon’s car was sponsored by Forj’d Leather, which is selling custom-made bracelets bearing Harmon’s car number.  Joining Harmon at the rear was Brandon Jones, who was forced to make an unapproved tire change on his #33 Jeld Wen / Menards Chevrolet.  Ultimately, it was Green who would trail them all, pulling behind the wall under green after three laps.

Finishing 39th was Reed Sorenson, whose “start-and-park” #15 Chevrolet has in less than a month become a new LASTCAR challenger.  This week, the red #15 carried sponsorship from Flex Liquid.  Like Jeff Green, Morgan Shepherd impressed in qualifying, not needing a provisional with a lap of 126.914mph.  Still, he wound up 38th, retiring after 46 laps with handling issues.  GMS Racing’s Spencer Gallagher ended up 37th after his #23 Allegiant Airlines Chevrolet cut a right-front tire in Turn 4 and slammed the outside wall.  Left with his second-consecutive Bottom Five was 36th-place Tyler Reddick, whose #42 Broken Bow Records / Jason Aldean Chevrolet finished under power, 36 laps down.

LASTCAR STATISTICS
*Green not only sweeps both Iowa last-place finishes for the second time in his career (the other coming in 2013), but has now finished last in half of the 16 XFINITY races held at the track. 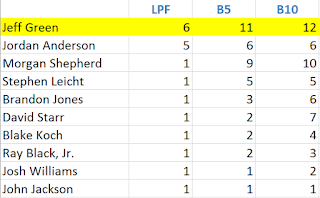