Jeff Green picked up the 94th last-place finish of his NASCAR XFINITY Series career in Saturday’s Lilly Diabetes 250 at the Indianapolis Motor Speedway when his unsponsored #93 RSS Racing Chevrolet fell out with a vibration after he completed 9 of 100 laps.

The finish, which came in Green’s 465th series start, was his fifth of the season and his first since Iowa, four races ago.  With this finish, Green, the all-time NASCAR last-place leader and five-time LASTCAR XFINITY Series Champion, has taken the lead in the 2017 series standings on a Bottom Five tiebreaker with Jordan Anderson, 10-6.

Green returned for his third-consecutive start for RSS Racing following finishes of 37th at Kentucky and 38th at Loudon.  His #93 was originally one of 41 entries, but prior to the publishing the preliminary entry list, Biagi-DenBeste Racing withdrew Casey Mears’ #98 GEICO Military Ford.  He didn’t participate in Friday’s opening practice, but ran 34th in Happy Hour, then qualified 28th with a lap of 160.245mph.  In a tweet posted by the team last weekend, it was revealed that Green “qualifies great every week on 25 lap old tires.  Beats a lot of cars that have sticker tires.”

Starting 40th on Saturday’s grid was Mike Harmon in the #74 AFM Graphics / Veterans Motorsports Dodge.  On the pace laps, he was joined by both Spencer Gallagher, whose crew made unapproved adjustments to the #23 Allegiant Airlines Chevrolet, and Green’s teammate Ryan Sieg, who missed the driver’s meeting after qualifying a season-best 8th in the #39 RSS Racing Chevrolet.  By the time the field addressed the starter’s stand for the green flag, Reed Sorenson had also dropped back from his 27th starting spot to trail the field in JD Motorsports’ #15 Chevrolet.

While NASCAR’s new aero package tightened the race up front, the tail end of the field spread themselves out quickly.  Harmon fell back to the rear on the first lap, 8.3 seconds back at the stripe.  He was then 14 seconds back on Lap 2, 18.575 on the third, and 23.786 on the fourth.  On Lap 5, Harmon was 29.006 seconds behind the leader when Daniel Hemric made an unscheduled pit stop for grass on the front grille of his #21 Blue Gate Bank Chevrolet, dropping him to the tail end of the field.  Hemric held the spot for only a few moments as Joey Gase pitted his #52 Donate Life / Sparks Energy Chevrolet that same lap.  Citing engine issues, Gase’s crew worked under the hood, then got the #52 back on track in last, two laps down.

Green entered the last-place picture on Lap 8, when he eased back to 39th, then pulled into the garage area the next time by.  With Gase still running, Green took last on Lap 11, where he remained for the rest of the afternoon.

Finishing 39th was Morgan Shepherd, whose #89 Racing With Jesus Chevrolet stayed out to lead a lap during the competition yellow on the 17th circuit, then pulled out of the race soon after the restart.  Reed Sorenson, who fell to the rear at the start, pulled out one lap later to secure 38th.  37th went to Tyler Reddick, whose splitter dug into the grass during a four-car wreck on Lap 39, ending the drive for his #42 Broken Bow Records / Jason Aldean Chevrolet.  Rounding out the Bottom Five was Timmy Hill in Carl Long’s OCR Gaz Bar Toyota.

LASTCAR STATISTICS
*This marked Green’s third last-place finish in six XFINITY events at Indianapolis, following his Lap 4 exit in 2013 and Lap 2 retirement in 2015, both for TriStar Motorsports.  It is the first last-place finish at the track for car #93 and RSS Racing. 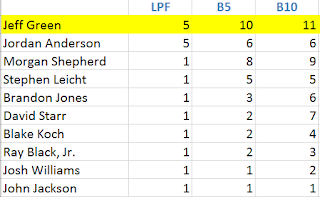 So do you think Jeff Green will hit 100 last place finishes this season? Or next season?