Josh Williams picked up the 1st last-place finish of his NASCAR XFINITY Series career in Friday and Saturday’s Coca-Cola Firecracker 250 at the Daytona International Speedway when his #92 Star Tron / Krankz Audio Chevrolet was involved in a multi-car crash after 50 of 104 laps.  The finish came in Williams’ sixth series start.

The 23-year-old driver from Port Charlotte, Florida shares much in common with Ryan Sieg, this week’s Cup Series feature.  Both drivers got their start in go-karts and, from their national series debuts, honed their skills with a family-owned team.  Williams’ stock car racing career developed from the ARCA Racing Series, which he joined at age 16.  He made his ARCA debut on February 27, 2010, finishing 20th of 34 drivers at his home track in Palm Beach.  His first Top 10 came the following year at Salem, where he ran 6th for longtime owner-driver Andy Belmont.  Williams returned for his first full-season bid in 2012, ranking 9th in points despite missing the race at Elko.

In 2013, Williams ran the entire ARCA schedule, splitting time between his own team, GMS Racing, and Roulo Brothers Racing.  The results were even more impressive – a runner-up finish to Corey LaJoie at Chicagoland, one of ten top-ten finishes in 21 starts, good enough for 5th in the standings.  Changing car numbers from #02 to #6 in 2014, Williams ran only a partial ARCA season, but never once finished worse than 14th in those 11 starts, earning him 13th in the standings.  That same year, he and his team made their Truck Series debuts at Martinsville, where they ran 34th of 36 after early brake issues.

Over the next two years, Williams became a strong championship threat in ARCA, finishing 3rd and 4th in the standings.  In the 39 combined races he made in 2015 and 2016, he earned 11 Top Fives and 26 Top Tens.  Finally, on April 9, 2016, came a breakthrough first victory at the venerable Nashville Fairgrounds, where his #6 Musselman’s Apple Sauce / Peg Leg Porker Chevrolet beat A.J. Fike by nearly 100 seconds.  A second victory came two months later at the Madison (Wisconsin) International Speedway, this time edging Kyle Weatherman’s dominant Mason Mitchell entry.

Part of what made Williams’ consistency so impressive was the fact that he not only raced for a small single-car team with very limited funding, but for many of those years ran old Chevrolet Impalas from the previous generation of ARCA racers, not upgrading to today’s “Gen-6” inspired composite bodies until recently.

2016 saw Williams make his XFINITY Series debut, running a pair of races in what were likely “start-and-park” efforts.  His series debut came at Michigan on June 11, where he drove Jimmy Means’ backup #79 DB Sales Co. Chevrolet to a 38th-place finish in a field of 40.  The next was a drive for King Autosport, a #92 BuckedUp Apparel Chevrolet fielded by Canadian owner-driver Mario Gosselin.  Again, the ride was short, leaving him 37th.

Coming into Daytona, Williams had built on his working relationship with Gosselin, making another three starts for King Autosport.  His first two were full-race efforts at Bristol and Pocono in Gosselin’s #90, yielding a career-best 22nd in the former and a 28th in the latter.  Following a 34th at Michigan in Gosselin’s #92, driver and team turned their efforts to the upcoming plate race, where this time both the #90 and #92 would be running the full race (Williams was announced as the driver after the preliminary entry list was published).  Williams’ #92 would carry new sponsorship from automotive additive company StarTron and Las Vegas-based headphone company Krankz Audio.

Friday’s race originally listed 43 drivers to attempt the 40-car field, but the list was soon pruned back to 40.  First two withdraw on Tuesday were owner-driver Morgan Shepherd’s #89 Visone RV Chevorlet as well as a new fourth JD Motorsports entry, #15, to be driven by Corey LaJoie.  By the time cars hit the track for practice, RSS Racing had also withdrawn their “start-and-park” #93, which did not have a driver selected.  Not having to worry about missing the cut, Williams ran 31st in Thursday’s opening practice, 8th of 16 in Happy Hour, and secured 32nd on the grid with a lap of 177.859mph.

Starting last on Friday was Jeff Green, who was back in B.J. McLeod’s #8 Toyota.  The last time Green drove this particular car, he finished 10th at Talladega, having led more laps in that race than in any of his XFINITY Series starts dating back to 2002.  He was joined at the rear by five other drivers, all sent to the back for making unapproved adjustments prior to the race: Justin Allgaier, William Byron, Matt Tifft, Jeb Burton, and Mike Harmon.  Just 11 laps were completed Friday before rain halted the action until the next morning.  At that moment, Green had already passed half the field up to the 20th spot.  Last then belonged to Joey Gase in Jimmy Means Racing’s #52 Trenton’s Legacy / Premier Millwright Chevrolet.

Other than another rain delay and a caution for lightning near the track, the rest of Stage 1 and first part of Stage 2 was run clean without any cautions for multi-car accidents.  That all changed on Lap 51.

That time by, both Williams and King Autosport teammate Brandon Brown in the #90 Horton Farms Chevrolet had paired up and were holding fast to positions just outside the Top 10.  Running the inside line, Williams was running directly behind Cole Custer, Erik Jones, and Daniel Suarez and had drafting help from behind from Stage 1 winner Blake Koch and the #90 of Brown.  Coming off Turn 4, contact between Custer, Erik Jones, and Suarez caused the entire inside line to check-up.  Suarez then cut left into Williams’ right-front as Brandon Brown rear-ended Koch, sending Williams, Suarez, and Koch toward the inside wall.  The result damaged both King Autosport cars – Williams’ driven into the inside wall while Brown’s nose was damaged from rear-ending Koch.

Williams, Brown, Koch, and Suarez were eliminated in the accident and ranked accordingly.  The remaining spot in the Bottom Five went to Harrison Rhodes, who lost the rear gear on his #01 Flex Tape Chevrolet late in the race.

For all the misfortunes at the tail end of the field, Daytona again yielded some good underdog stories.  Dakoda Armstrong picked up his second-straight top-five finish with a career-best 3rd in the #28 WinField United Toyota.  Jeb Burton, a late announcement to drive alongside Armstrong for JGL Racing, picked up his own first Top Five by running 4th in the #24 Estes Express Lines Toyota.  Joey Gase gave Jimmy Means Racing its second-straight Top 10 at Daytona, challenging for a Top 5 late before settling for 10th.

The best B.J. McLeod car this time was veteran David Starr, who in his 112th XFINITY Series start earned his first-ever Top 5 with a 5th in an unsponsored #99 Chevrolet.  It was Starr’s first Top 5 in any of NASCAR’s top three series since October 19, 2013, when he followed Johnny Sauter to the checkered in a Truck Series race at Talladega.  McLeod himself finished 11th in his #78 Chevrolet, besting his previous career mark of 17th last week at Iowa, while Jeff Green held on for a respectable 20th.

LASTCAR STATISTICS
*This marked the first last-place finish in an XFINITY Series race for the #92 since the July 4, 2015 running of this race, when Dexter Bean’s run in the Gamache Truck Center / Cote Chevrolet for King Autosport ended with a vibration after 6 laps. 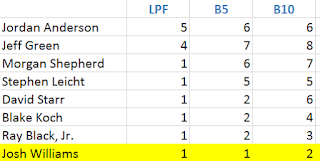