TRUCKS: Norm Benning’s smoking engine makes the show - but not a lap - at Kentucky

Norm Benning picked up the 10th last-place finish of his NASCAR Camping World Truck Series career in Thursday’s Buckle Up In Your Truck 225 at the Kentucky Speedway when his unsponsored #6 Norm Benning Racing Chevrolet fell out with engine trouble without completing any of the 150 laps.

The finish, which came in Benning’s 171st series start, was his first of the season and his first in the Truck Series since last fall at Texas, 12 races ago.

The prolific owner-driver from Pennsylvania entered the 2017 season after one of the most difficult seasons of his career.  A streak of five consecutive DNQs at the start of the year kept him off the track until this very Kentucky race last season, when Mike Mittler had him drive his locked-in #63 Chevrolet.  At the end of the season, Benning’s #6 had made just three starts – one each with himself, Sean Corr, and Ryan Ellis, the last of which at Michigan earning the number its most recent last-place finish.

Another three DNQs opened Benning’s 2017 campaign, but he’s made every race since with a season-best 17th at Texas.  This summer, with the Truck Series now having trouble assembling a full 32-truck field, Benning has returned to entering his backup truck as a “start-and-park,” carrying his old #57.  Tommy Regan was the first to drive it last month at Gateway, finishing 29th in a field of 30, followed by J.J. Yeley’s last-place run at Iowa.  For Kentucky, there was no driver listed.  But by the night of the race, the #57 was driven by B.J. McLeod, who for the first time in his career would run triple-duty in Cup (for Rick Ware Racing in the #51), XFINITY (in his own #8), and Trucks.

Wednesday’s three practice sessions were cut to two as teams struggled to make it to the track on time, and lingering weather issues combined with a 34-truck entry list would make every second count.  In the first session, Benning came out on track in #6, but did not complete a lap, perhaps due to the very engine problem that ended his night Thursday.  He then turned his attention to the #57, running two laps, but anchoring the charts with a lap of 153.605mph, nearly six seconds off the lap of session leader Grant Enfinger.

The #57 then sat out Wednesday’s second session while Benning put up his required single lap in #6, running another three seconds slower at a conservative 141.025mph.  Despite the struggles, when rain canceled qualifying, Benning’s rank in Owner Points secured him the 17th spot on the grid.  The #57 also made the show on its five attempts, and B.J. McLeod was tabbed to drive.  This allowed McLeod to run triple-duty for this first time in his career after a similar last-minute deal for Rick Ware Racing’s #51 in Cup (on top of his own XFINITY ride #8).

Unable to put up a lap in qualifying, Joe Nemechek’s part-time #87 (with only two attempts) was sent home.  Jennifer Jo Cobb withdrew her second truck, #0, which was first listed for Tommy Regan, then later Joey Gase.  The #0 had three prior attempts in 2017, which would have put the truck ahead of Nemechek, but behind the #22 Tim Self-owned entry of Austin Wayne Self, which had four.  As a result, Self’s #22 Airflotek / Snap Track Toyota lined up last on the starting grid.

During Thursday’s pace laps, however, Self was joined by Chase Briscoe, who destroyed his primary #29 Cooper Standard Ford after a flat tire caused a hard practice crash in the Turn 2 wall.  Had the accident not happened, Briscoe would have started 3rd on points.  Both Benning and B.J. McLeod also went to the rear as they had both missed the driver’s meeting.  As the two black Chevrolets found their way to the back of the pack, Benning’s truck was smoking once more, and he pulled into the garage before he could complete a lap.  McLeod followed the next time by.

Finishing 30th was Dover last-place Camden Murphy in the Mike Mittler / D.J. Copp #63.  Continuing a trend from other Truck Series teams, Murphy’s #63 had a strip of tape across the driver’s side of the roof with “Monster Jam Cam” written on it, a reference to Murphy’s other driving duties in the Pirate’s Curse monster truck.

29th went to Matt Mills, who drove in a combined effort between Martins Motorsports and Faith Motorsports.  While Martins sold the #44 to Faith earlier this year, the threat of rain risked Martins’ own #42 Thompson Electric Chevrolet missing another race, so they changed the truck number to ensure Faith’s spot in the field.  Unfortunately, Mills drew the first caution on Lap 22 when he lost control as the leaders lapped him in Turn 4, causing the #44 to hit the wall with the right-front.

Rounding out the Bottom Five was Grant Enfinger, whose fast #98 Ride TV Toyota led five laps early only to be eliminated in a multi-truck accident with Ben Rhodes, T.J. Bell, and Matt Crafton.

LASTCAR STATISTICS
*Benning himself scored the number’s only other last-place finish at Kentucky in 2015, when his #6 Chevrolet had engine troubles after 2 laps of the UNOH 225.
*This marked the second time in three races where the Truck Series’ last-place finisher did not complete the opening lap, joining Jennifer Jo Cobb’s race last month at Gateway. 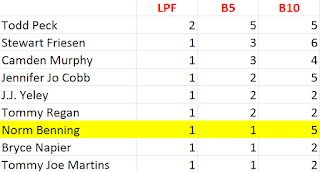