Caleb Holman picked up the 1st last-place finish of his NASCAR Camping World Truck Series career in Wednesday’s Eldora Dirt Derby at the Eldora Speedway when his #75 Food Country USA / Lopez Wealth Management Chevrolet fell out with transmission issues after 12 of 150 laps.  The finish came in Holman’s 34th series start.

The story of Holman’s last-place finish is as much about the team as it is the driver.  Team owner Charlie Henderson has been fielding competitive stock cars and trucks since March 14, 1982, when Brad Teague came home 12th in the Valleydale 500 at Bristol.  Not far from the Bristol track, on the other side of the Tennessee / Virginia border, Henderson Motorsports still has the same base in Abingdon, Virginia.  This same town not only held the headquarters for three-time Daytona 500 winners Morgan-McClure Motorsports, but also that of Food Country USA, the grocery chain founded by the Henderson family in 1914.  For this reason, most every racer that rolled out of the Henderson shop carried Food Country’s logos on the quarter-panels.

Since their 1982 debut, Henderson Motorsports has remained a fixture in stock car racing, having entered races in all three of NASCAR’s top divisions, ARCA, and the X-1R Pro Cup Series.  They were most prolific in the XFINITY Series from 1985 through 2007, during which time the Food Country USA colors made 296 series starts.  Their best points finishes were a pair of 7th-place runs in 1987, again with Brad Teague, and 1992 with Butch Miller.  Teague also gave the team its first of three XFINITY wins, which came at Martinsville in 1987.  The other two were earned in 1989 by journeyman driver Rick Wilson, who in 2010 would drive a similarly-painted car to victory in an exhibition race at Bristol.

Caleb Holman has been the bridge for Henderson Motorsports’ transition from XFINITY to its current life in the Truck Series.  Also born in Abingdon, Holman made his stock car debut in 2003, when he finished 18th in his ARCA debut at Nashville.  At the time, the 19-year-old Holman was driving for his father Darrell, who also entered him in two XFINITY races that year at Richmond and Milwaukee.  Holman first drove for Henderson’s team in 2005, when he ran 26th in a Pro Cup race at Bristol, and drove the team’s final two XFINITY races at Richmond in 2006 and Bristol in 2007.  By then, Henderson and Holman had turned their attention to full-time Pro Cup competition.  The duo won their first of 15 races at Bristol in 2008.  In 2014, Holman stormed to the series championship, scoring half the season’s 12 wins and finishing Top 10 in each.

Henderson Racing’s Truck Series effort, meanwhile, began in 2012 with Holman running a partial schedule.  This time, the team made their series debut at Rockingham in 2012, where Holman finished 21st.  As Holman reached the peak of his Pro Cup career, the Truck Series remained a part-time operation with no more than eight starts a year.  But, after the Pro Cup Series ended in 2014, the team has still only run a handful of races.  Slowly, but surely, the team has again rebuilt itself with Holman earning his first Top 10 at Marintsville in 2015, an 8th in a race won by Matt Crafton.  This year, Holman has shared his ride with driver-turned-broadcaster Parker Kligerman, and the team has now doubled their Top 10 total with four in 37 series starts.

The Eldora dirt track held special significance for both driver and team.  Last year, Holman took his first NASCAR pole at the track and finished 2nd in his heat race before an early wreck in the main left him 30th.  In a field of 34 series regulars and dirt-track ringers, Holman was looking to build on the performance.  On Tuesday, he ran 10th in the opening practice, then put up the fastest lap in Happy Hour – the only driver to break the 20-second mark.  Wednesday saw him qualify 9th with a lap of 88.162mph, which lined him up next to point leader Christopher Bell on the front row of Heat Race #4.  Holman defended his spot, and remained 9th on the grid for the Main.

Starting last in Wednesday night’s feature was ARCA driver Ray Ciccarelli, who filled the seat of Jennifer Jo Cobb’s #10 Stealth Belt Chevrolet.  Though not on the preliminary entry list, Ciccarelli had locked himself into his first-ever Truck Series start despite a spin in the Last Chance Qualifier that left him 2 laps down, 7th in the 8-truck field.  The only driver to actually fail to qualify was Tommy Regan, who ran a conservative lap in Norm Benning’s second truck, #57, then parked after two laps of Heat Race #3.  The other driver sent home was a frustrated J.R. Heffner, whose Martins Motorsports-prepared #44 A. Colarusso / Park East Sales Chevrolet lost an engine during his qualifying lap.  Without a backup engine and unable to obtain another, driver and team were forced to withdraw before the Heat Races even began.

As the 32-truck field field made their pace laps, 31st-place starter Mike Harmon (who replaced Josh Reaume in Beaver Motorsports’ #50 Chevrolet) made a brief unscheduled pit stop, then returned to the track before the start.  When the green flag dropped, it was Harmon who now trailed the field by 8 seconds on Lap 1, then 10 seconds on Lap 2.  On the fourth circuit, last place changed hands with the first caution of the night.

Bobby Pierce, twice denied a dominant victory in this event, had been struggling to find the handle on his #63 Gotta Race / 866-Get-A-Pro Metal Roofing Chevrolet.  After handling woes in practice and qualifying, Pierce spun out of a transfer spot in Heat Race #1 and backed into the Turn 3 wall, crumpling the sheet metal around the fuel filler neck.  Extensive repairs by the Mike Mittler team’s seven crewmen got the truck back onto the grid for the Last Chance Qualifier just in time for the start.  Pierce responded by rallying from the back of the pack to the win, securing the 26th spot on the grid.

But on Lap 4, Pierce was in trouble again.  J.J. Yeley lost control in front of him and the two made contact, damaging Pierce’s right-front.  Then Pierce’s teammate Chris Windom rear-ended the #63.  Pierce lost a lap as his truck stalled, then managed to make it to pit road.  Yeley, whose left-front was obliterated in the collision with Pierce, took the last spot on Lap 5 as the crew looked under the hood of his #83 Fr8Auction.com Chevrolet.  He rejoined the race on Lap 10, four laps down, as the field lined up for a restart.

On Lap 12, Caleb Holman was still among the leaders when his truck bogged-down on the restart.  Sitting in the outside lane, Holman was able to steer clear of traffic and hug the outside wall, then came down to the garage area.  He reported that the truck’s transmission was stuck in first gear.  Four laps later on the 16th circuit, Holman slipped behind Yeley for last, where he would remain for the rest of the race.  On Lap 25, Holman made one more lap to see if the team’s repairs were successful.  Unfortunately, he quickly returned to the garage, where his #75 was lined up next to Tommy Regan’s parked #57.  The team was done for the night.

Holman’s mechanical troubles did allow him to escape unscathed from a series of hard crashes that slowed many of the early laps and filled the remainder of the Bottom Five.  31st went to Daytona winner Kaz Grala, whose #33 15-40 Connection Chevrolet collided hard with the right-front of Christopher Bell’s spinning #4 Toyota.  While Bell managed to work his way back to the lead before a flat tire left him 9th, Grala was done for the night.

The other three spots were filled by trucks involved in another grinding Turn 2 crash.  On Lap 43, Ben Rhodes’ #27 Safelite Auto Glass Toyota was collected in a collision between Australian rookie Max Johnston’s spinning #02 Brandt Chevrolet and Korbin Forrister in Jennifer Jo Cobb’s second truck, the #0 Chevrolet.  While Forrister managed to make his way back around the track, he soon found his way to the garage along with the other two disabled trucks. 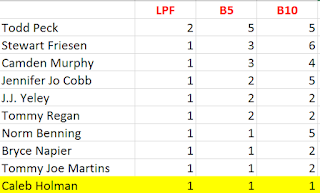