TRUCKS: Jennifer Jo Cobb pieces together battered truck, then calls it a night at Gateway

Jennifer Jo Cobb picked up the 7th last-place finish of her NASCAR Camping World Truck Series career in Saturday’s Drivin’ For Linemen 200 at Gateway Motorsports Park when her #10 ASAP Appliance Service / Driven2Honor.org Chevrolet fell out with suspension issues without completing any of the 160 laps.

The finish, which came in Cobb’s 137th series start, was her first of the season and her first in the Truck Series since October 24, 2015, when her #10 V.G. Pride Group / Vapor Station E-Vapor Chevrolet fell out with engine trouble after 29 laps of the Fred’s 250 at the Talladega Superspeedway.  She now retains sole possession of 6th on the Truck Series last-place rankings.

For the past four years, Jennifer Jo Cobb Racing has remained one of the most determined underdog operations in the sport.  The team has also been a fixture here at LASTCAR through their use of a second “start-and-park” truck to help fund the team’s operations.  So prolific has the team been in this regard that they’ve claimed the last four consecutive LASTCAR Truck Series titles – 2013 with Chris Lafferty, then the next three in a row with Caleb Roark.

Through the first six rounds of 2017, Cobb’s team only fielded the primary #10 Chevrolet, still carrying the logos of her military foundation Driven2Honor.org.  However, the closure of Red Horse Racing and the resulting short fields this month perhaps led to the return of her second truck, the #0.  Last week in Texas, Californian driver Tommy Regan took last with electrical issues after five laps while Cobb finished 19th, both of them filling out a field of just 28 trucks for 32 open spots.  But for Gateway, the plan was different.

On June 5, Bryce Napier, who finished last with TJL Motorsports earlier this year at Martinsville, secured a four-race deal to drive for Cobb, starting with Gateway and Iowa, and then exploring opportunities to run larger tracks once he turns 18 this August.  For the Gateway race, Napier was entered in the #10, which would carry the same sponsorship from ASAP Appliance Service which he brought with him to TJL at Martinsville.  He would run the flagship #10, which at Gateway would be carried on the renumbered black #0 that Regan raced at Texas.  Cobb would run the all-white #0 Chevrolet, which was #10 at Texas.

As at Texas, Cobb and Napier were members of a short field, as just 28 drivers were on the preliminary entry list.  The list was expected to grow to at least 30 as the full-time entries of both TJL’s #1, now driven by Jordan Anderson, and Beaver Motorsports’ #50, were again missing.  While both did end up joining, the list also shrank.  On Tuesday, Halmar Friesen Racing withdrew Kansas last-placer Stewart Friesen from the next two races in order to reorganize the #52 team.  Then on Thursday, Daytona last-placcers MDM Motorsports withdrew the #99 Chevrolet following the complete destruction of Timothy Peters’ truck in a late-race wreck at Texas.  Thus, even with Anderson and the #50 (once again driven by Josh Reaume), the list stood at 28 drivers for 32 spots.

This time, two more teams followed the Cobb model and entered backup trucks, bringing the grid back to 30.  NASCAR veteran Joe Nemechek returned for his first Truck start since Martinsville, bringing his #87 Chevrolet to race against his son John Hunter Nemechek in NEMCO’s flagship #8 D.A.B. Constructors / TBC Chevrolet.  Right with Nemechek was Cobb’s Texas driver Tommy Regan, who this time found himself in an old Norm Benning truck.  The black Chevrolet not only carried Benning’s old #57 on the doors, but Benning’s name on the roof rails.  As it turned out, these weren’t the only changes.

During Saturday’s first practice, Bryce Napier turned 14 laps, but ran the slowest times of the 20 trucks that ran.  In the second session, where Cobb ran 26th of 29 in the #0, Napier improved to 22nd, but wrecked in Turns 1 and 2, resulting in heavy right-side damage to the black #10.  With just hours until the start of the race and both her trucks entered, the decision was made for both drivers to swap rides.  Napier was handed the #0 Chevrolet while Cobb would attend to the #10.  With the plan already in place to park one of the trucks, Cobb’s team made quick repairs, similar to Jordan Anderson’s effort last summer at Eldora.  Screencaps taken from Cobb’s Facebook feed showed heavy damage to the right-front of #10 as it sat on the grid and strips of black tape holding the hood and the rear spoiler in place.

Both Cobb trucks would roll off in front of Tommy Regan, who started shotgun in the second Benning Chevrolet.  Regan turned a lap of just 107.888mph, a lap nearly nine full seconds slower than polesitter Chase Briscoe’s lap of 136.828mph.  Cobb lined up 29th, having not turned a lap in the damaged #10.  Also not running laps in qualifying were Joe Nemechek, Kevin Donahue in the Mike Mittler-prepared #36 Kansas City Brewery Chevrolet, Travis Kvapil in Bolen Motorsports’ #66 Chevrolet, and the Premium Motorsports #49 Chevrolet of Wendell Chavous.  Noah Gragson in the #18 Switch Toyota and the second Mittler truck of Kyle Donahue in the #63 were both sent to the rear for unapproved adjustments.

By the end of the first lap, however, Cobb had pulled her battered #10 behind the wall.  She reported that, on top of the damage suffered in practice, the crew discovered a leak in the radiator on pit road, and decided to pull off to prevent additional damage to the engine.  Cobb pulled into the garage one lap before Regan, who parked Benning’s #57, two before Joe Nemechek in the #87, and three before Travis Kvapil in the #66.  Clay Greenfield, who was making his first Truck Series start since Daytona, actually lost laps before Regan, Nemechek, and Kvapil parked, and he briefly held the 29th spot.  He returned to run a total of 26 laps before retiring in 24th with steering issues.  The move dropped Regan, Nemechek, Kvapil, and Kevin Donahue into the Bottom Five.  It also allowed Nemechek to be on pit road when his son took the checkered flag just hours before Father’s Day.

Special thanks to Sam Laughlin and the posters at the Rubbin’s Racin’ Forums for their help following the Cobb team’s weekend at Gateway.

LASTCAR STATISTICS
*This marked the third-consecutive year where the last-place finisher of Gateway’s Truck Series race failed to complete the opening lap, joining Joey Gattina in 2015 and Brandon Brown last year.
*This was the first Truck Series last-place finish at Gateway for both Cobb and the #10. 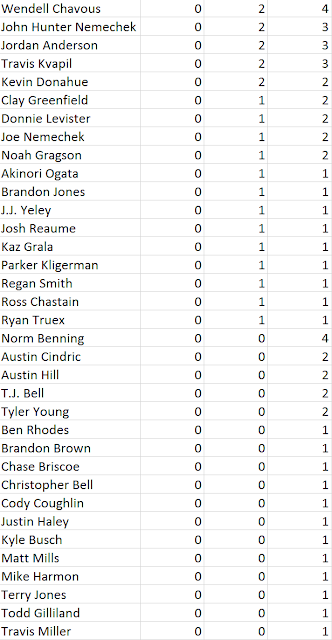 Amazing how it works out sometimes. Cup race had one of the more exciting and competitive Last Place and Bottom 5 battles in recent memory, not getting decided until 3 laps to go. . .while the truck race Bottom 5 was set after lap 11. :P
Hopefully that doesn't become a norm for that series, though I understand the financial aspect.