Todd Peck picked up the 2nd last-place finish of his NASCAR Camping World Truck Series career in Friday’s N.C. Education Lottery 200 at the Charlotte Motor Speedway when his #63 Arthritis Foundation / Pulse Transport Chevrolet fell out with electrical issues after 4 of the race’s 134 laps.

The finish, which came in Peck’s 24th series start, was his second of the season and first since Atlanta, three rounds ago.  He is the first repeat last-placer of the 2017 Truck Series season.

Charlotte saw Peck in a new, but familiar ride.  After driving the first three races of the season for D.J. Copp in the #83 Chevrolet, Peck became the fifth different driver to drive Mike Mittler’s #63 in 2017 (joining Bobby Gerhart, J.J. Yeley, and Kyle and Kevin Donahue).  The truck, however, appeared to be the exact same #83 that Peck finished 18th with in February’s season opener at Daytona, the #83 replaced with Mittler’s #63.

Peck didn’t participate in Thursday’s opening practice, then anchored the chart in Happy Hour, running a single lap of just 144.733mph.  Noah Gragson, fastest in the session at 181.941mph, ran a lap nearly eight full seconds faster.  He then secured the 32nd and final starting spot in the field with a lap of 152.754mph, still the slowest of the session.  Two trucks, each nearly three seconds faster, were sent home: Brandon Brown, back in his family’s #86 Coastal Carolina University Chevrolet for the first time in 2017, and Cody Ware, unable to pull double-duty in his father’s #12 Motorsports Safety Group Chevrolet.  Ironically, Brown ran faster than Peck despite spinning in Turn 3 during his timed lap.

On race night, Peck was joined at the back by Jennifer Jo Cobb and Kansas last-placer Stewart Friesen, both sent to the rear with unapproved adjustments.  Friesen’s adjustments were made following a crash in qualifying.  Next to challenge for the spot was unlucky polesitter Christopher Bell, who led the first two laps before a flat left-rear tire sent him to the rear.  The next time by, Peck pulled behind the wall, done for the night.

31st and 30th went to Brandon Jones and Daytona winner Kaz Grala, respectively, who collected each other in a Lap 60 crash.  Jones’ #99 Roland Chevrolet owned by Daytona last-place owner Matthew Miller lost control and slid into Grala’s #33 Outlaw Fasteners Chevrolet, sending both trucks into the wall and leaving Grala with a loose rear trunk lid.  29th went to Regan Smith, who crashed hard entering the quad-oval when he backed his #92 BTS Tire & Wheel / Advance Auto Parts Ford into the outside wall.  On the Cup side, Smith recovered to finish a strong 4th in relief of Aric Almirola during Saturday’s Monster Energy Open.  Rounding out the Bottom Five was Wendell Chavous, citing oil pump issues on Premium Motorsports’ #49 Down South Restoration & Remodeling Chevrolet.

LASTCAR STATISTICS
*This was the first Truck Series last-place finish for the #63 since last fall at Texas, seven races ago, when Norm Benning’s unsponsored Chevrolet had engine troubles after 22 laps of the Striping Technology 350.  It’s also the first time the number has finished last in a Truck race at Charlotte.
*Peck is the first Truck Series last-place finisher at Charlotte to fall out with electrical issues since May 15, 2009, when Chris Fontaine’s #22 Red Rocks Cafe Dodge also exited after 4 laps. 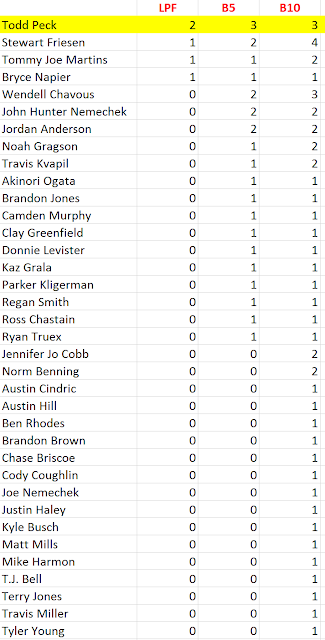