Stewart Friesen picked up the 1st last-place finish of his NASCAR Camping World Truck Series career in Friday’s Toyota Tundra 250 at the Kansas Speedway when his #52 Halmar International Chevrolet was involved in a two-truck accident after 16 of 167 laps.  The finish came in Friesen’s 10th series start.

Friesen is a Truck Series rookie, but by no means a newcomer to oval racing.  The native of Niagara-on-the-Lake, Ontario (and now residing in Sprakers, New York) has been a fixture on dirt tracks across the northeast.  He’s best known for his aggressive driving in the Big-Block Modified circuit, scoring 23 Super DIRTcar Series victories, and has also competed in the World of Outlaws.

Along the way, Friesen has partnered with Chris Larsen, owner of civil construction firm Halmar International, and the two eyed a jump to NASCAR.  Last year, Larsen fielded a #16 Chevrolet for Friesen at the Eldora dirt track race.  Friesen finished 3rd in the second heat race, started 12th in the main, and finished 28th after a late-race crash.  He then ran five of the final 11 rounds of the season, earning a season-best 13th at Loudon.

On January 9, 2017, Friesen and Larsen announced the formation of Halmar Friesen Racing, which would attempt the full Truck Series schedule.  The team would be managed by Tommy Baldwin, Jr., whose Cup team Tommy Baldwin Racing sold its charter to Leavine Family Racing and scaled back to a part-time Open effort.  The team, now fielding #52, had a rough start to the 2017 season when they were involved in the grinding Lap 2 accident, leaving them next-to-last in the 32-truck field.  But a lead-lap 19th-place run at Atlanta and a 25th-place finish at Martinsville, 3 laps down, lifted the team to 19th in points headed to Kansas.

Just 31 trucks made the preliminary entry list for Friday’s race, threatening the first short field of the season.  That changed by Friday, when D.J. Copp, who entered Atlanta last-placer Todd Peck in the #83, fielded a second truck, #36, for Camden Murphy.  The 20-year-old Murphy has now made one Truck Series start a year for the last four seasons, all for different teams.

Without further added entries, both owner-drivers Norm Benning in the #6 Houston Roll Pipe Chevrolet and Jennifer Jo Cobb in the #10 Mark One Electric / Driven2Honor.org Chevrolet were able to make their first starts of the season.  Friday would also see the debut of Faith Motorsports, whose #62 either withdrew or failed to qualify for each of its entries with driver Donnie Levister.  After Tommy Joe Martins returned to XFINITY Series competition, Faith Motorsports acquired Martins’ #44, which Matt Mills would drive on Friday.

Starting 32nd and last on Friday was Cody Ware, making his first start of the season in Beaver Motorsports’ #50 Motorsport Safety Group Chevrolet.  Ware decorated his truck with emojis, changing his driver name above the door to “Body Ware.”  Ware’s weekend began with some difficulty when he blew a tire and hit the wall, damaging the #50 team’s only truck.  The team managed to make repairs, as did D.J. Copp’s team after Todd Peck hit the wall in qualifying.  Peck and Spencer Boyd, also sent to the rear for unapproved adjustments, joined Ware in the back for the start of the race.

The race began with struggles for Wendell Chavous, driver of Premium Motorsports’ unsponsored #49 Chevrolet.  Chavous brought out the first yellow on Lap 7 when his truck slapped the outside wall off Turn 4.  Another wreck came on the restart when the #29 Cooper Standard Ford of Chase Briscoe clipped and spun Grant Enfinger’s #98 Ride TV Toyota off Turn 2, nearly collecting Enfinger’s ThorSport teammate Cody Coughlin in the #13 JEGS Toyota.

Two laps after the ensuing restart, Stewart Friesen was running near the tail end of the field when his #52 lost control in Turn 3, sending him backing into the outside wall.  As he slid down the inside of the track, Jordan Anderson cut to the inside line, looking to clear the wreck.  Anderson announced that Wednesday he would be driving for Martinsville last-placers TJL Motorsports, carrying the names of fans on the rear decklid to thank them for the post-Atlanta rebuild of his Rick Ware-prepared #12 Chevrolet (now driven by Spencer Boyd).  Anderson nearly had Friesen cleared when the nose of the #52 slammed into the right-rear of Anderson’s truck, tearing up the sheet metal behind the rear wheels as well as the nose of the #52.  Unable to clear the Crash Clock, Friesen was done for the day.  Anderson managed to clear the clock and finish 19th.

Chavous, running three laps down after his earlier crash, saw his night end with an even harder hit with the Turn 4 wall on Lap 24, leaving him next-to-last.  30th and 29th went to D.J. Copp teammtes Camden Murphy and Todd Peck, respectively, out with electrical and brake issues.  Rounding out the Bottom Five was Noah Gragson in Kyle Busch Motorsports’ #18 Switch Toyota.  He’s now finished 14th or worse in three of his four starts this season.

LASTCAR STATISTICS
*Friesen is the first Canadian-born driver to finish last in a Truck Series race since March 30, 2014, when Terrebonne, Quebec’s Alex Guenette lost the fuel pump on fellow countryman Mario Gosselin’s #74 Motos Illimitees Chevrolet after 32 laps of the Kroger 250 at Martinsville.
*This marked the first last-place finish for the #52 in a Truck Series race since May 20, 2005, when the ignition failed on Ken Schrader’s #52 Federated Auto Parts Chevrolet after 9 laps of the Quaker Steak and Lube 200 presented by Click It or Ticket.  The number had never before finished last in a Truck Series race at Kansas. 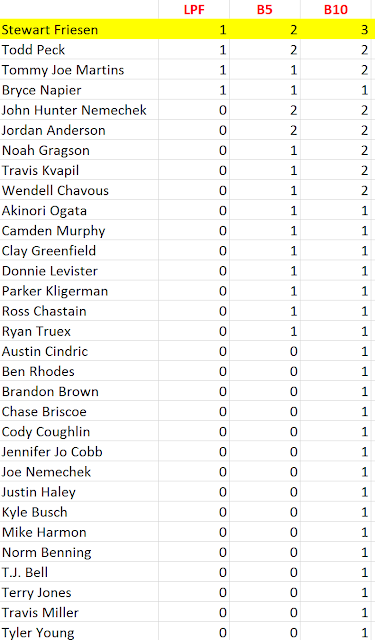