Chris Buescher picked up the 3rd last-place finish of his Monster Energy NASCAR Cup Series career in Monday’s Food City 500 at the Bristol Motor Speedway when his #37 Bush’s Beans / Scott Products / Kingsford Chevrolet was eliminated in a two-car accident after 53 of 500 laps.

The finish, which came in Buescher’s 50th series start, was his first of the season and his first in a Cup race since last July at Daytona, 27 races ago.

Buescher’s only other last-place finish came less than a month before his breakthrough win at Pocono, where he was leading when a fogbank cut the race short at 138 of 160 laps.  A thrilling five-race battle ensued where Buescher looked to stay inside the Top 30 in driver points to maintain his place in the Chase.  His most serious challenger was David Ragan and the #23 BK Racing entry.  With just 36 laps to go in the cutoff race at Richmond, both Ragan and Buescher found themselves in the middle of a multi-car pileup.  Ragan wrecked out while Buescher went on to finish 24th, locking him into the Chase.  While Buescher was eliminated in the first round, it was a stellar rookie season and another impressive accomplishment by Front Row Motorsports.

This season, Buescher debuts a second team for JTG-Daugherty Racing, his #37 fielded alongside the #47 of A.J. Allmendinger.  The deal came about after Roush-Fenway Racing leased JTG the Charter belonging to Greg Biffle and the now-defunct #16 team.  Buescher’s Chase berth secured him a spot in the Advance Auto Parts Clash at Daytona, where he came home a strong 9th of 17 cars, and his best run of the season came at Martinsville, where he ran 11th.  Bristol looked to be a chance for another strong run, as a 5th-place run there last August helped pave the way for his spot in the 2016 playoffs.

Unfortunately, the weekend began with frustration.  Qualifying on Friday was rained out, leaving him 27th on the grid based on Owner Points.  He ran just 25th of the 39 entrants in opening practice, 19th in the second, and in Happy Hour, lost control off Turn 4, damaging the right-rear of his car.  22nd on the charts at the end of that session, Buescher’s team elected to roll out the backup, meaning that he would have to start at the tail end of Sunday’s 39-car field.  To make it up to his crew, Buescher bought a pair of large chocolate chip cookies with “My Bad 37” written in blue-and-white frosting.

The persistent rains which pushed the 500-lap race to Monday morning caught many campers in gathering floodwaters.  Buescher, still at the track late Sunday night, went out with a friend to help campers move their mobile homes to safety.  He posted pictures of RVs to Twitter to help alert their owners.  “We didn’t get recognized to the very end,” said Buescher, “incognito.”

On Monday morning, Buescher lined up at the tail end of the field.  Moving up one spot as a result was 39th-place starter Derrike Cope, who was making his first Bristol start since 2006.  Both Cope and Premium Motorsports teammate Reed Sorenson carried sponsorship from the Low T Centers, which joined the program two weeks ago on Cope’s #55.

By the end of the first lap, Buescher had dropped Cope to last, and on Lap 2, was running the high lane, six seconds behind the leaders.  By Lap 4, Cope had passed Timmy Hill, whose Rick Ware Racing-prepared #51 Chevrolet carried new sponsorship from SleepFresh Mattresses.  On Lap 9, Hill caught Cope in another challenge for position, but on Lap 13, race leader Kyle Larson sped by them both to put them a lap down.  On the 26th circuit, Hill and team discussed a potential problem with the engine, though little more was said about it under green.  On Lap 30, Hill went down a second lap, then a fourth the 46th time by.  Hill was still last when the first caution flew.

That moment came on Lap 56, when Kurt Busch’s #41 Haas Automation / Monster Energy Ford slid into Trevor Bayne’s #6 AdvoCare Ford off Turn 2, sending Busch sliding into the inside wall.  As the field slowed behind them, Buescher, who had passed more cars than anyone else to that point, rear ended the slowing #15 of Reed Sorenson.  Sorenson managed to keep going and, in fact, picked up a season-best 28th.  Buescher, however, trailed oil over some distance of the track before stopping on the apron.  As #37 was towed to the garage, Buescher was done for the day, and a five-minute red flag was needed to clean up all the oil.

Buescher officially took last from Timmy Hill on Lap 57.  Hill himself fell out with suspension issues after 234 laps, leaving him 37th.  Between Hill and Buescher was 38th-place Dale Earnhardt, Jr., whose #88 Nationwide Insurance Chevrolet crashed hard when he slipped in more oil on a Lap 218 restart.  36th went to Danica Patrick, whose #10 Mobil 1Annual Protection Ford was damaged in an earlier incident, then eliminated after tangling with David Ragan on Lap 325.  Rounding out the Bottom Five was Kyle Busch, who hit the wall on Lap 210, then raced his way back into the Top 10 only to crash even harder on Lap 384.

LASTCAR STATISTICS
*This marked the first last-place finish for #37 in a Cup Series race since November 9, 2014, when Mike Bliss’ Accell Construction Chevrolet fell out with brake trouble after 16 laps of the Quiken Loans Race For Heroes 500 at Phoenix.  The number hadn’t finished last at Bristol since August 23 of the same year, when Dave Blaney’s turn in the Tommy Baldwin-prepared Accell Construction machine ended after 37 laps with overheating issues. 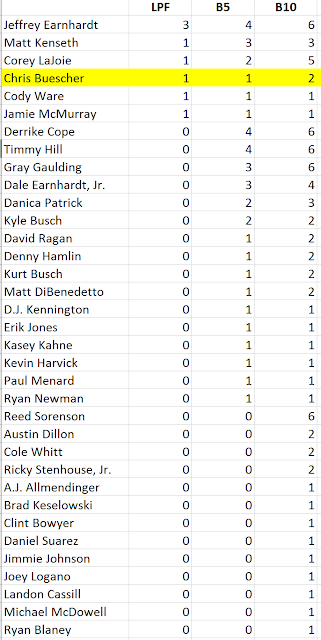