Jeffrey Earnhardt picked up the 3rd last-place finish of his Monster Energy NASCAR Cup Series career in Sunday’s O’Reilly Auto Parts 500 at the Texas Motor Speedway when his #33 Superior Logistics Services / Chris Kyle Memorial Benefit Chevrolet was involved in a multi-car accident after 9 of 334 laps.

The finish, which came in Earnhardt’s 31st series start, was his third of the season and his third in four races.  It’s also his fourth last-place finish across NASCAR’s top three divisions, tying him for 25th overall with, among other drivers, his father Kerry.

Last week at Martinsville, Earnhardt avoided his third-consecutive last-place finish, but a hard crash into the Turn 2 wall left him a disappointing 36th at the finish.  Since finishing 26th in the Daytona 500, the Circle Sport with The Motorsports Group team has not finished better than 32nd, leaving the driver 37th in points.  However, Circle Sport’s Charter, combined with just 40 cars arriving in Fort Worth, guaranteed that #33 would be in the race once more.

Earnhardt arrived at the track with returning sponsorship from Superior Logistics Services, Inc., which carried its logo on the hood of the #33 during the Can-Am Duels at Daytona as well as Las Vegas.  By race day, hos quarter-panels (as well as XFINITY Series driver Carl Long’s #13 Toyota) carried logos for the fourth annual Chris Kyle Memorial Benefit, a veteran’s fundraiser named in honor of Texan SOC (SEAL) Chris Kyle, USN, whose life was dramatized in Clint Eastwood’s 2014 film “American Sniper.”

In practice, Earnhardt ran 38th in the opening session, .  He qualified 31st in time trials with a lap of 182.852mph.  While it was the slowest lap turned that session, nine other drivers didn’t get through inspection in time, thus giving Earnhardt his best starting spot of 2017.

Starting last on Sunday was the lowest-ranked of the group in Owner Points, the #55 Low T Centers Toyota of Derrike Cope.  Cope, making his first Texas start since 2006, rolled off as the only driver in Sunday’s field to have also competed in the inaugural event at the track in 1997.  Driver and team were back from a one-week hiatus where both had skipped last Sunday’s race at Martinsville.  Combined with the return of Tommy Baldwin Racing (with J.J. Yeley behind the wheel) Texas marked the first 40-car field since Baldwin’s team last ran in the Daytona 500.  Three cars joined Cope at the rear of the field: Kasey Kahne and Trevor Bayne had both wrecked in practice on Saturday, sending them to backup cars.  Eventual race winner Jimmie Johnson was sent back as well, a spin in practice forcing him to change tires after qualifying.

At the same time, another last-place story was developing.  By the one lap to go signal, 25th-place starter Austin Dillon made an unexpected trip down pit road, then turned and headed to the garage.  Initial reports of a broken track bar gave way to news that something had come off the passenger side truck arm, forcing the crew to make emergency repairs.  In a situation reminiscent of Timmy Hill’s two runs for Premium Motorsports at Indianapolis and Michigan in 2015, the Richard Childress Racing crew missed the start, but looked to make a return.  If they were unsuccessful, Dillon would not only be handed his first last-place finish since Chicagoland in 2015, but would be the Cup Series’ first “did not start” in a points race since September 5, 1993, when Bob Schacht didn’t turn a lap of the Mountain Dew Southern 500 at Darlington in Thee Dixon’s #85 Burger King Ford.

On Lap 12, the work was done, and Dillon pulled out of the garage and onto the track, 11 laps behind.  He returned under what was already the second caution of the day, triggered by a three-car accident.  Jeffrey Earnhardt had broken loose in Turns 1 and 2, sending his car backwards into the outside wall.  Also collected was Reed Sorenson, the debut of new sponsor Xchange of America on his #15 Chevrolet marred with damage to the left-rear, then a lost right-rear wheel under caution.  Gray Gaulding also suffered damage to the right-front corner of his #23 Dr. Pepper Toyota as he tried to clear the wreck to the inside.  Earnhardt, however, climbed out of his car, which was then towed through the backstretch wall to the infield, done for the day.

On Lap 22, Earnhardt took last from Dillon, who went on to finish 33rd.

Finishing 39th was Timmy Hill, the only other retiree from the race.  Hill’s #51 Fenton Motors Chevrolet for Rick Ware Racing lost an engine during the early laps of Stage 2.  38th-place Kasey Kahne went to the garage late with a broken axle, but still limped the #5 Farmers Insurance Chevrolet home in the 38th spot.  Cope came home 37th, having run the extreme high lane in Turns 1 and 2 to let faster traffic go by.  Rounding out the Bottom Five was Paul Menard, his #27 Dutch Boy / Menards Chevrolet returning from several laps in the garage with a new battery cable.

LASTCAR STATISTICS
*The nine laps completed by Earnhardt are the fewest by a Texas Cup race last-place finisher since November 4, 2012, when Reed Sorenson turned six laps in Humphrey-Smith Racing’s #91 Plinker Tactical / MCM Elegante Toyota before electrical issues.
*This marked the first last-place finish for the #33 in a Cup Series race at Texas. 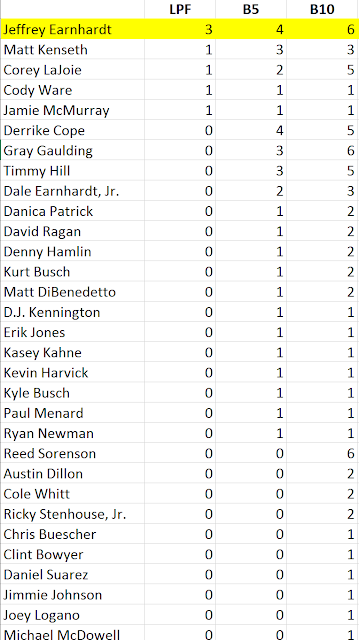