Jordan Anderson picked up the 2nd last-place finish of his NASCAR XFINITY Series career in Saturday’s DC Solar 200 at the Phoenix International Raceway when his unsponsored #93 RSS Racing Chevrolet fell out with overheating issues after he completed 3 of 200 laps.  The finish, which came in Anderson’s ninth series start, was his second in a row.

The preliminary entry list, which included Anderson, grew from 39 cars to 41 on Tuesday with the additions of owner-drivers Morgan Shepherd, who successfully raised funds to enter his #89 Racing With Jesus / Visone RV Chevrolet, and Mike Harmon in his #74 Dodge.  Shepherd seemed geared for an all-out qualifying attempt when he put up the 19th-best time of 32 drivers in Friday’s opening practice.

On Saturday, when Obaika Racing once again withdrew the #77 and driver Josh Bilicki, Shepherd and Harmon were locked-in to their first races of the season.  Shepherd and Harmon ended up timing in 29th and 30th in qualifying after eight drivers were unable to complete inspection in time.  Anderson’s #93, meanwhile, earned the 26th starting spot with a lap of 127.945mph.  He ran 30th of 37 after his only practice laps during Happy Hour.

Starting 40th on Sunday was the second Obaika Racing car of Stephen Leicht, once again moved to the #97 after the withdrawal of Bilicki and the #77.  Footage from the pre-race seemed to indicate that Leicht was driving the #77 as the “9” on the door number appeared to be a hastily-changed “7,” differing in style from the “9” used in previous races.  The car was also colored black over red, differing from the damaged Las Vegas car’s red over black.

The #97 behind the wall after 2 laps of the race, followed a lap later by Anderson, which first gave the impression that both would be “start-and-parks.”  Had the finish stayed this way, it would have been the first XFINITY last-place finish for the #97 since 2003, when Jeff Fuller exited after 3 laps at Rockingham.  But on Lap 125, Leicht pulled back out of the garage and completed 22 more laps, climbing to 37th before retiring with handling issues.  This dropped Anderson to last on Lap 127.

Between Anderson and Leicht were 39th-place Daniel Suarez, who on Lap 10 made contact with the outside wall after crossing the nose of Jeremy Clements’ #51, then cut down a right-rear two circuits later and slammed rear-first into the Turn 1 barrier.  38th went to Carl Long, who made his own 2017 debut in his #13 CrashClaimsR.Us Toyota, then pulled out with rear gear trouble as the listed reason.  Morgan Shepherd rounded out the Bottom Five, citing brake issues after 33 laps.  Fellow owner-driver Mike Harmon finished three laps down in 31st.

LASTCAR STATISTICS
*This marked the first XFINITY Series last-place finish at Phoenix for both Anderson and the #93. 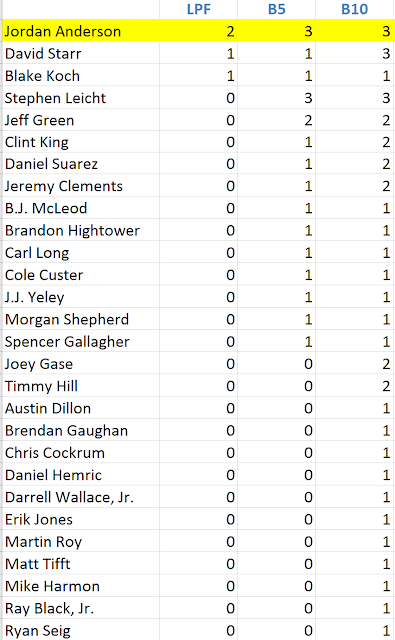