Jordan Anderson picked up the 3rd last-place finish of his NASCAR XFINITY Series career in Saturday's Service King 300 at the Auto Club Speedway of Southern California when his unsponsored #93 RSS Racing Chevrolet fell out with electrical issues after 3 of 150 laps.  The finish, which came in Anderson's 10th series start, was his third of the season and third in a row, completing a sweep of NASCAR's "West Coast Swing" at Las Vegas, Phoenix, and Fontana.

Anderson was one of 42 drivers on the preliminary entry list, and one of just 40 who arrived in Fontana to attempt the race.  On Wednesday, Josh Bilicki tweeted that he would once again not be running the #77 Vroom! Brands Chevrolet for Obaika Racing, which was withdrawn for the fifth consecutive race.  Bilicki indicated a possible 2017 debut at Texas in two weeks.  Also withdrawn on Friday was John Jackson, who was slated to drive John Carter's #72 CrashClaimsR.us Chevrolet for the first time in 2017.

Morgan Shepherd, who last week at Phoenix made his first XFINITY start of the season, was not on the preliminary entry list and did not join it that weekend.  It's the first time Shepherd has not been entered in an XFINITY race since the June 13, 2015 running of the Great Clips 250 at Michigan.

Back at the track, Anderson put up the 27th-fastest lap of 38 drivers in opening practice, sat out Happy Hour, and fell back on Owner Points for the 35th spot on the grid with a lap of 167.801mph.

Starting last in Saturday's race, nearly 10mph slower than Anderson in qualifying, was Mike Harmon.  During the pace laps, Harmon's #74 SupportMilitary.org Dodge was joined by the #01 JD Motorsports Chevrolet of Harrison Rhodes, sent to the rear when crew chief Rob Winfield missed a pre-race meeting.  There is no report of Anderson falling to the rear by driver's choice, as he had at Atlanta, but by Lap 4 he was in the garage, the first retiree.

Finishing 39th was Stephen Leicht, running the same re-numbered #97 (former #77) Vroom! Brands Chevrolet.  Leicht, who again struggled for speed in practice, retired after 12 laps with a vibration.  38th went to Brandon Hightower, back with Motorsports Business Management for the third time this year and the first time since Las Vegas.  Swapped in for Timmy Hill in the only other Dodge besides Harmon in Saturday's field, his #40 Legacy Construction machine retired with suspension issues.  Hill, replacing Carl Long in MBM's #13, finished 30th

Two separate incidents filled out the Bottom Five.  37th-place Ross Chastain, whose #4 Florida Watermelon Association Chevrolet fell out after 81 laps.  Contact from another car cut his left-rear tire, which shredded the sheet metal inside the fender.  According to the driver's tweet, a hot chunk of tire rubber got in his driver's suit, forcing him to jump out.  The car was pulled out of the race with "crash" as the officially-listed cause.  36th went to Paul Menard's #2 Richmond / Menards Chevrolet.  4th in the final segment, Menard was moving up the track off Turn 4, completing a pass on Erik Jones.  At the same moment, Jones cut left, but caught the rear bumper, sending Menard into the outside wall.  An oil fire forced Menard to make an exit of his own, ending the team's day.

LASTCAR STATISTICS
*This actually marks the second time that a single XFINITY Series driver has swept the “West Coast Swing.”  In 2015, last-place record holder Jeff Green and TriStar Motorsports’ #10 Toyota trailed the same three straight races at Las Vegas, Phoenix, and Fontana.  The next year, in 2016, TriStar swept the races once more, this time with Green at Las Vegas and Phoenix, then defending LASTCAR XFINITY Champion Matt DiBenedetto at Fontana.
*This marked the first XFINITY Series last-place finish at Fontana for both Anderson and the #93. 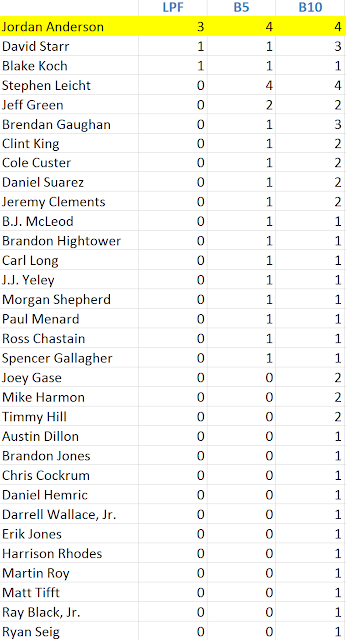