Jordan Anderson picked up the 1st last-place finish of his NASCAR XFINITY Series career in Saturday’s Boyd Gaming 300 at the Las Vegas Motor Speedway when his unsponsored #93 RSS Racing Chevrolet fell out with electrical issues after 1 of 200 laps.  The finish came in Anderson’s eighth series start.

Last year, when he drove for Bolen Motorsports in the Truck Series, Anderson earned a career-best 11th at Gateway, turned heads at Eldora when his crew twice rebuilt his damaged truck to get it into the main event, and all the while continued to build a passionate fan base.  While driver and team parted ways by season’s end, the South Carolina driver is undaunted in his effort to ascend through NASCAR’s ranks.

The road has been rough.  Last month at Daytona, Anderson reunited with car owner Mike Harmon, who had put him in his #74 trucks since 2014.  The team arrived with a Chevrolet rolled out of a small Featherlite trailer, but ended up sixth-fastest of the ten drivers who missed the show.

At Atlanta, Anderson teamed with Rick Ware Racing, where Lucas Oil followed him from Harmon’s effort as primary sponsor.  This time, he out-qualified four drivers, only to be involved in the most spectacular accident of the day.  Contact from Korbin Forrister sent him into the grass, where the splitter dug in, destroying the truck.

While Anderson was uninjured, the accident has left him without a Truck Series ride.  He has since re-opened his fan-supported site www.sponsorjordan.com to raise funds for repairs, offering spots for both fans and sponsors to have their logos on his ride.

In the meantime, Anderson has also been tabbed by RSS Racing to drive their second entry, the #93 Chevrolet, during select XFINITY Series events.  The predominately “start-and-park” car, withdrawn from Daytona, made its 2017 debut with Anderson at Atlanta, where he started 26th and exited moments after Blake Koch’s accident for a 39th-place finish.  While the #93 was originally listed without a driver on Las Vegas’ preliminary entry list (along with the #24 for Drew Herring and #90 for Martin Roy), Anderson was added by Wednesday.  He did not participate in the opening practice, but ran 32nd of 41 drivers in Happy Hour.  His qualifying lap of 177.766mph was good enough for 30th on the grid.

By the same Wednesday that Anderson was added, the entry list itself grew from 39 to 43 cars, thanks to the addition of Mike Harmon’s #74 Dodge, Morgan Shepherd’s #89 Chevrolet, and what was going to be the first dual-entry of 2017 for Obaika Racing with its #77 and #97 Vroom! Brands Chevrolets.  Obaika originally listed Stephen Leicht as driver of the #77 with the #97’s pilot to be announced, but Leicht struggled to find speed in the second practice session.  He turned just one lap of 146.163mph, more than 7 seconds off the leader’s pace.  By qualifying, the #77 and Bilicki were withdrawn, putting Leicht in the #97.  Although he again ran the slowest lap in qualifying, just 162.518mph, Leicht got the #97 in on Owner Points, placing him 40th and last on the grid.

Last place changed hands several times in the first two laps.  Anderson joined Leicht at the back of the field by driver’s choice, just as he had at Atlanta.  Brandon Hightower, who like Anderson was out of a ride, picked up Carl Long’s ride in the #13 MBM Motorsports Toyota and also fell to the back by choice.  Timmy Hill, driving the second MBM car #40, fell to the back due to unapproved adjustments, and Leicht fell back a second time by driver’s election, reassuming his spot.  By Lap 2, Anderson had pulled his car behind the wall, finally ending the battle.

Leicht’s race ended just three laps later with a crash on the backstretch, sending his #97 behind the wall.  Hightower came home 38th, out with a vibration.  The rest of the Bottom Five was filled by B.J. McLeod’s team.  McLeod himself returned to the #78 for the first time this year, but brake issues stopped his @CouchCrewChief Chevrolet after 159 laps.  All-time last-place leader Jeff Green exited 18 circuits later, this time citing crash damage on his #8 Safecraft Safety Equipment / Momo Chevrolet.  Green narrowly averted more serious damage when Martin Roy sped full speed between his car and the #28 of Dakoda Armstrong.

LASTCAR STATISTICS
*This marked the 12th last-place finish for #93 in an XFINITY Series race and the first at Las Vegas.  The most recent last-place finish for the number - and the second RSS Racing team – came June 19, 2016 at Iowa, 22 races ago, when Josh Reaume scored his own first last-place run after electrical issues 4 laps into the American Ethanol E15 250. 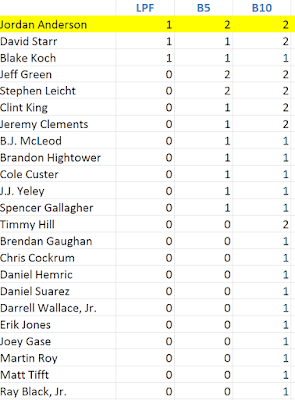