Jeffrey Earnhardt picked up the 2nd last-place finish of his Monster Energy NASCAR Cup Series career in Sunday’s Auto Club 400 at the Auto Club Speedway of Southern California when his #33 Mike’s Tint Shop / K1 Speed Chevrolet fell out with transmission problems after 99 of 202 laps.

The finish, which came in Earnhardt’s 29th series start, was his second of the season and his second in a row.

After initial reports that Phoenix sponsor NiceRide Apparel would be back on the #33 at Fontana, not one but two west coast sponsors signed on with Circle Sport with The Motorsport Group.  The first, K1 Speed, is a series of indoor go-kart tracks in Northern California.  The second, Mike’s Tint Shop, is an automotive glass company out of Orange County.

Earnhardt ran 38th of the 39 entered cars in Friday’s opening practice, outpacing Timmy Hill’s Rick Ware Racing entry by a half-second, improved to 36th on Saturday morning, then ran 37th in Happy Hour.  In between, he ran a lap of 175.063mph during Friday’s qualifying session.  Though his lap was the third-slowest of the session, he ended up starting 32nd.  The reason: five other drivers didn’t turn in a qualifying lap.  Jimmie Johnson, who wrecked his primary car in the first practice, elected not to run.  The other four – Joey Logano, Trevor Bayne, Matt DiBenedetto, and Gray Gaulding – were unable to get through the inspection line fast enough to make their attempt.

Lowest-ranked of the five drivers who did not put up a time was rookie Gray Gaulding, who on Sunday rolled off 39th in his #23 SunFrog.com Toyota.  Before the start, he was joined by four other drivers.  Dale Earnhardt, Jr. and Paul Menard were both sent to the rear for post-qualifying tire changes, Earnhardt notified by Goodyear the morning of the race.  David Ragan went to a backup car after his primary #38 Camping World / Good Sam Ford cut a tire near the end of practice Saturday morning, sending him hard into the Turn 3 wall.  The fourth member was Jeffrey Earnhardt, the #33 team electing to make a transmission change.

By the end of Lap 1, Timmy Hill had taken the 39th spot.  Hill’s #51 Bubba Burger Chevrolet put up the slowest time in qualifying, but the five cars missing from time trials kept the Rick Ware car from starting last for the fourth consecutive race.  Hill was 6.007 seconds behind the leader on Lap 1, then 8.935 back on Lap 2.  At the same time, trouble broke out up front.  Brad Keselowski started 3rd, but his Ford was damaged at the green flag when outside-polesitter Denny Hamlin got a slow start.  Trying to nurse his car around, Keselowski spun off the nose of Jimmie Johnson on Lap 3, sending him into the grass – and in last place.

The race restarted on Lap 7 with Keselowski still trailing, playing catch-up with the field as they drew away in front of him.  Thoughts of ending the second-longest active Cup streak without a last-place finish (273 races, behind Kevin Harvick’s 578) ended the next time by when he caught the unsponsored #55 Chevrolet of three-time LASTCAR Cup champion Derrike Cope.

Cope, making his first Fontana start since the fall of 2004, fought serious handling issues for most of the weekend.  By Lap 11, he was 18.743 seconds behind the leader, and losing another tenth each second.  Heading into Turn 1 on the 17th circuit, he was the first to be lapped by race leader Kyle Larson.  Ten laps later, Kevin Harvick made an unscheduled stop for a flat right-rear tire, lost a lap and briefly fell to 39th.  But within the same 28th circuit that he returned to action, Harvick blasted by Cope, dropping #55 to last once more.  There, the Premium Motorsports Chevrolet would remain for much of the day.

Green-flag stops to diagnose the handling issues continued to cost Cope laps.  He was five circuits behind on Lap 46, then eight down on Lap 76.  That time by, the crew called him in for a fuel-only stop while the remaining members looked under the hood, looking to make drastic adjustments to the suspension, specifically the sway bar and springs.  When Cope returned ten laps behind on Lap 79, he was still hanging on, saying “No authority getting in.  It’s just driving me getting in.”  On Lap 94, eleven circuits behind, the crew called him to the garage area to diagnose the problem, which turned out to be something dragging under the car that upset the balance.

Within five laps of Cope entering the paddock, Jeffrey Earnhardt joined him, saddled with engine woes for the second-straight week.  With 67 laps to go, Earnhardt’s #33 was the first car listed “OUT” of the race with Cope’s team still making repairs.  At that moment, Cope trailed Earnhardt by just 16 laps.  If he completed at least 17 more before the checkered flag, he would avoid his first Cup Series last-place finish since October 8, 2006 at Talladega.  That single finish would move Cope within one finish of Michael McDowell for the 3rd-most last-place finishes in Cup Series history and one finish of Morgan Shepherd for the 3rd-most across NASCAR’s top three divisions.

On Lap 167, with just 33 laps to go in regulation, the Premium Motorsports team pushed #55 back out of the garage – and onto the track.  Two circuits later, Cope made a stop for fresh tires, and now set his sights on finishing the race under power.  On Lap 185, during the caution for Matt Kenseth’s hard wreck on the backstretch, Cope officially passed Earnhardt for 38th, settling the last-place battle.  Cope finished under power, 85 laps in arrears.

Last-place starter Gray Gaulding came home 38th, eliminated when he crashed down the backstretch on Lap 181.  Kenseth’s wreck placed him 37th, his third Bottom Five of the year and second in a row.  Rounding out the group was Timmy Hill, nine laps down, but also under power.

For the second race in a row, the 2016 last-place finisher of the event took the checkered flag.  Kyle Larson, eliminated in a hard backstretch crash last year, claimed his second career win.  As pointed out by reader Justin Brookover, Larson’s first two last-place finishes were also at the sites of his first two Cup victories (a last at Michigan in August 2014 was followed by a win last summer).  For those of you making fantasy picks, Aric Almirola finished last in the 2016 running of the upcoming race at Martinsville.

LASTCAR STATISTICS
*This marked the first last-place finish for the #33 in a Cup Series race at Fontana since March 25, 2012, when Brendan Gaughan’s #33 South Point Hotel & Casino Chevrolet had engine trouble after 1 lap of the Auto Club 400. 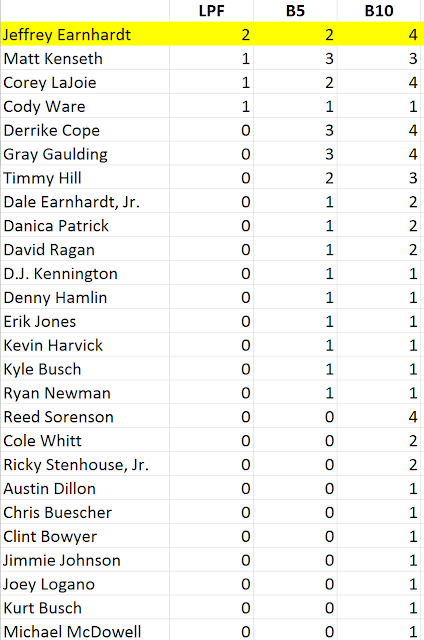