Jeffrey Earnhardt picked up the 1st last-place finish of his Monster Energy NASCAR Cup Series career in Sunday’s Camping World 500 at the Phoenix International Raceway when his #33 NiceRide Apparel Chevrolet fell out with transmission problems after 9 of 314 laps.  The finish came in Earnhardt’s 28th series start.

Son of Kerry Earnhardt and nephew of Dale Earnhardt, Jr., Jeffrey is currently competing in his third Cup Series season.  His famous last name overlooks what has been a difficult path to NASCAR’s upper ranks.  According to his website, Earnhardt began “piloting a silver 4 cylinder Yugo on the dirt tracks of Wythe Raceway in Rural Retreat, Virginia.”

Earnhardt worked his way through the NASCAR K&N Pro Series East, finishing 5th in the 2007 standings, and made his XFINITY debut in 2009 at Watkins Glen.  He remained a part-timer in national competition through 2010, when he partnered with Rick Ware Racing.  The Ware effort included an opportunity to both race Trucks as well as professional sports car racing in the Rolex Grand-Am Sports Car Series, piloting Porsches and Mustangs at Daytona and Birmingham.  It wasn’t until 2014 that Earnhardt ran a full season in NASCAR, running the #4 Chevrolet for Johnny Davis’ JD Motorsports, and it wasn’t until this year that he now attempts a full Cup campaign.

2017 has been a reunion of sorts.  Earnhardt drives for The Motorsports Group, whose owner Curtis Key fielded his first XFINITY Series ride in 2009.  TMG came off its first full Cup season in 2016 with journeyman Josh Wise, who made all but five of the first 31 races and scored the LASTCAR Cup Series Championship.  This year, TMG merged with Joe Falk’s team Circle Sport, which came over after providing its Charter to Leavine Family Racing.  The move gave TMG a guaranteed starting spot for the first time in its existence.  As part of the change, Falk assumed ownership duties and switched the primary car’s number from TMG’s #30 to Circle Sport’s #33 (though the #30 may return as a part-time Open team this year). Earnhardt climbed behind the wheel of a car painted silver and black, much like his grandfather’s.

Coming into 2017, Earnhardt’s best Cup finish was a 26th last fall with Go FAS Racing, the #32 Ford team which now runs with driver Matt DiBenedetto.  A TMG car had yet to make a Cup restrictor-plate race, shut-out of three races in 2016, including their second-straight Daytona 500, and had withdrawn from Talladega last fall.  Thanks to Circle Sport’s Charter, however, the #33 was guaranteed its 32nd starting spot.  And, even after a late-race crash down the backstretch, Earnhardt matched his career-best 26th.

Earnhardt stood as one of the 39 entrants for the Phoenix race, and for the second-straight week acquired sponsorship for the main event.  This time, the backing came from NiceRide Apparel, a first-time sponsor in NASCAR.  Earnhardt ran 37th of 38 drivers in Friday’s opening practice, qualified 38th of 39 with a lap of 128.032mph.  He rounded out practice on Saturday with the 38th-best lap again in the second session, and 37th in Happy Hour.

Rick Ware Racing started last for their third-consecutive Cup start.  The team returned to Atlanta’s black-and-white #51 Spoonful of Music Foundation paint scheme on its Chevrolet with Timmy Hill aboard.  Joining him at the rear were Denny Hamlin, whose #11 FedEx Toyota picked up a screw in qualifying and had to change tires, and Aric Almirola, with a new engine under the hood of his #43 Smithfield Ford.

By the end of Lap 1, Jeffrey Earnhardt had fallen to 39th and was starting to lose touch with the field.  He was 5.647sec behind the leader after the first circuit, 6.909 on the second, and 8.438 on the third.  The fourth time by, Earnhardt’s car started smoking and he pulled down pit road, then entered the garage.  Reports indicated rear gear trouble, and though the car was soon pulled from NASCAR’s RaceView program, the team was still making repairs.  On Lap 80, the work was done, and #33 stopped at the end of pit road before re-entering the track, 76 laps behind.  Five circuits later, Earnhardt was back in the pits, and the crew instructed him to make another lap to return to the garage.  There, on Lap 90, the crew discovered a transmission issue.

Back on the track, on Lap 119, hard-luck Corey LaJoie found the outside wall for the fourth-straight race, striking the outside wall in his #83 BK Racing Graphics Toyota.  The impact knocked him out of the race.  However, Earnhardt, still behind the wall, would still secure last if he didn’t come back out on Lap 206 (or Lap 208, given the green-white-checkered finish).  Just short of that mark, on Lap 190, FOX Sports showed the #33 was listed “OUT,” securing the last-place run.  Curiously, prior to that, the FOX leaderboard showed Earnhardt multiple laps down, indicating he was on the track - even though he was still in the garage.  LaJoie ended up 38th.

37th went to Matt Kenseth, who took a savage hit to the outside wall on Lap 193 in his #20 Tide Toyota.  Rounding out the Bottom Five were 36th-place Gray Gaulding in the #23 SunFrog.com Toyota and the #38 Jacob Companies Ford of David Ragan, both eliminated in a two-car wreck on Lap 206 when Ragan slid into Gaulding in Turn 1.

The win on Sunday went to Ryan Newman, who finished last in the same event a year earlier.

LASTCAR STATISTICS
*This marked the first last-place finish for the #33 at Phoenix since 2013, when Tony Raines’ Little Joes Autos Chevrolet, fielded by Joe Falk when Circle Sport was its own Cup team, exited with brake problems after 29 laps of the AdvoCare 500.
*This marked the first time three consecutive NASCAR Cup races had first-time last-place finishers since the spring of 2007, when J.J. Yeley’s #18 Interstate Batteries Chevrolet crashed at Texas, David Stremme came home laps down at Phoenix in the #40 Coors Light Dodge, and Paul Menard’s #15 Menards Chevrolet lost an engine at Talladega.
*Earnhardt is the first Cup last-place finisher to trail a race because of transmission issues since June 30, 2013, when Scott Riggs’ #44 No Label Watches Ford fell out after 6 laps of the Quaker State 400 at Kentucky. 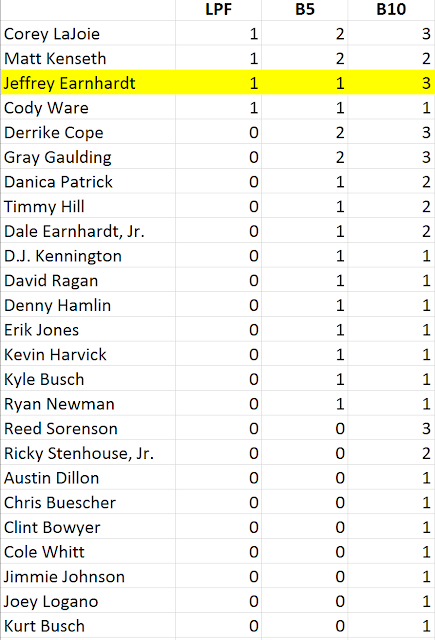 *Championship rankings corrected to include an additional Bottom Five and Bottom Ten for Dale Earnhardt, Jr. that was previously not counted.
Posted by Brock Beard at 5:41 PM