Corey LaJoie picked up the 1st last-place finish of his Monster Energy NASCAR Cup Series career in Sunday’s Kobalt 400 at the Las Vegas Motor Speedway when his #83 JAS Expedited Trucking Toyota was involved in a single-car crash after 18 of 267 laps.  The finish came in LaJoie’s fourth series start.

The 25-year-old son of two-time XFINITY Series Champion Randy LaJoie, who now designs race car seats through his company The Joie of Seating, Corey LaJoie has been racing stock cars since his K&N Pro Series East debut at Thompson on July 11, 2009.  He then diversified across various short track divisions, winning his first-ever modified start at Atlanta in 2010, five K&N races in 2012, and three in ARCA in 2013.

In November 2013, on the heels of his limited ARCA season, LaJoie made his debut across NASCAR’s top three divisions in the XFINITY race at Homestead, where he ran 34th for Richard Petty Motorsports.  He then branched out into Trucks in 2014, running a pair of starts for Ricky Benton and coming home 10th at Bristol.  Less than a month later came his Cup debut at New Hampshire.  Replacing a retiring Dave Blaney at former “start-and-park” effort Randy Humphrey Racing, LaJoie ran the full race for 41st in the 43-car field, then improved to 35th the next month at Charlotte.

2017 sees LaJoie entering the battle for Cup Series Rookie of the Year, replacing Matt DiBenedetto as driver of BK Racing’s #83 Toyota.  Now an Open team (since BK sold the #83’s charter to Front Row Motorsports, who leased it to TriStar Motorsports’ #72 team), LaJoie had to race his way into his first Daytona 500, and did after a controversial accident with fellow Open driver Reed Sorenson.  A strange incident coming onto pit road during a green-flag stop left him 24th at the finish, and a smack to the outside wall on a restart at Atlanta left him 34th.  Curiously, LaJoie wasn’t originally listed as an entry for the Atlanta event, but the short field encouraged BK to enter the #83 for a guaranteed start.  He was already on the preliminary list for Las Vegas, where he would again be one of 39 drivers.

LaJoie’s sponsor for Las Vegas was JAS Expedited Trucking, which most recently backed Matt DiBenedetto’s run at Phoenix last fall.  The car ran 31st-fastest in Friday’s opening practice, qualified 34th with a lap of 185.554mph, then ran 34th and 35th in the final two sessions on Saturday.

Starting last for the second-consecutive Cup race Sunday was Rick Ware Racing, which this week brought Daytona driver Timmy Hill aboard the blue #51 Dashub Chevrolet.  Sunday was just over five years to the day of Hill’s Cup debut, when he got Ware’s team into its own first series race.  The team changed transmissions during the weekend, causing the team to incur an additional penalty that sent them to the rear.  Joining them were Ricky Stenhouse, Jr., sent to the back after wrecking his primary #17 Fastenal Ford in practice, and Danica Patrick, who had a new rear gear in her #10 Aspen Dental Ford.

On the first lap of the race, Hill lost last to Derrike Cope, who was making his first Cup start at the Vegas track since 2004.  Cope’s unsponsored black #55 Premium Motorsports Chevrolet trailed the leader by 5.302 seconds that time by, then passed Hill for 38th on Lap 2, leaving Hill last, 7.352 back.  On the twelfth circuit, Hill was the first driver to be lapped, and the leaders were soon catching Cope and the other drivers in front of him.  Then the first caution fell on Lap 19.

LaJoie was running near the back of the pack when his right-rear tire failed going into Turns 1 and 2, sending his car hard into the outside wall.  The right-front of his Toyota heavily damaged, the #83 slowed to a smoking stop against the inside backstretch wall, where he climbed out.  The car was towed to the garage, done for the day.

38th on Sunday went to point leader Kevin Harvick, whose late-race Atlanta misfortune was followed by a blown right-front tire that sent his #4 Mobil 1 Ford hard into the Turn 1 wall.  Hill came home 37th, out after 135 laps with suspension issues.  Patrick came home 36th, her #10 out with a late-race engine failure that triggered the deciding nine-lap sprint to the finish.  Rounding out the group was Cope, the final car to finish under power.  Cope spun down the backstretch on Lap 153 and took the checkers 13 circuits behind.

LASTCAR STATISTICS
*This marked the first last-place finish for the #83 in a Cup race at Las Vegas and the 19th in series history.  The number had not finished last in a Cup event since July 24, 2016 at Indianapolis, 19 races ago, when Matt DiBenedetto’s ScienceLogic Hybrid Cloud Toyota had engine trouble after 4 laps of the Combat Wounded Coalition 400.
*LaJoie is the third Cup driver to score his first last-place finish at Las Vegas, joining Steve Park (2000) and Kirk Shelmerdine (2004). 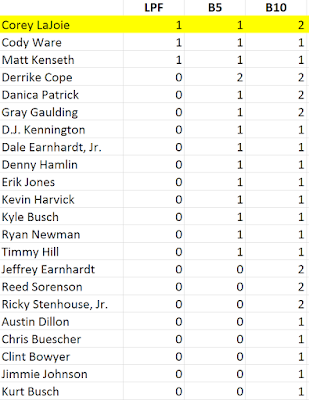