David Starr picked up the 1st last-place finish of his NASCAR XFINITY Series career in Saturday’s Powershares QQQ 300 at the Daytona International Speedway when his #99 Striping Technology Chevrolet fell out with engine troubles after 4 of 124 laps.  The finish came in Starr’s 98th series start.

A four-time Truck Series winner with nearly two decades of experience, Starr broke into the XFINITY Series at Talladega on April 15, 2000, when his Wayne Day-prepared #16 31-W Insulation Pontiac finished next-to-last after an early crash.  After eight seasons of running no more than seven races a year, Starr joined TriStar Motorsports in 2014, where he split time in the #44 Toyota with several other drivers.  His best run of the year again came at Talladega, where he led inside the final ten laps before settling for 9th.  The run earned him a full-time ride with TriStar in 2015, when he finished 16th in points.  But seven races into the season, Starr and TriStar parted ways, and the veteran rounded out the year running a second car for RSS Racing.

This year, Starr signed with owner-driver B.J. McLeod, who went full-time in his #78 Ford last year.  For their 2017 effort, McLeod put Starr and fellow former TriStar driver and current last-place record holder Jeff Green in two of his Chevrolets – Green in a flat black #8 Chevrolet and Starr in a white #99.  Starr’s sponsor would be Striping Technology, who backed some of his rides for RSS.  Driving McLeod’s own #78 would be 21-year-old Clint King, who ran three races for Rick Ware racing last fall.

Starr, King, and Green were among the 44 drivers who would compete to make the 40-car entry list.  Starr ran 34th in the opening practice, 21st in the second, and secured the 33rd spot in qualifying, the last secured by speed, with a lap of 178.781mph.  Starr’s teammates Clint King (38th) and Jeff Green (40th) also made the race, putting three McLeod cars in the field for the first time.  Missing the race were ARCA veteran Mark Thompson for Motorsports Business Management, Stephen Leicht, who was moved from Obaika Racing’s withdrawn #77 to the #97, and owner-drivers Mike Harmon and Morgan Shepherd.  Shepherd’s #89 VisoneRV.com Chevrolet ran a special black-and-gold paint scheme in honor of his 50th year in NASCAR.

Green’s black McLeod #8 started 40th, and briefly took 39th from Mario Gosselin’s #90 Orlando Longwood Auto Auction Chevrolet.  By the end of the first lap, however, Green had suddenly dropped off the pace, 5.169 seconds behind the field.  An electrical issue caused him to slow onto the apron in Turns 3 and 4.  As he limped onto pit road, Starr also slowed in Turn 1, drawing the first caution.  Reports indicated Starr was trailing fluid, sending him to the garage.  Green’s own mechanical issues were repaired, and after he returned to the track on Lap 6, three circuits behind, he passed Starr for 39th the next time by.

Unfortunately, Green was soon eliminated in the first of a series of grinding wrecks on Lap 23.  When Scott Lagasse, Jr.’s #24 FDOT Toyota bumped Tyler Reddick’s #42 Broken Bow Records Chevrolet, the field closed up, gobbling 19 cars.  Green, who had earned both his laps back under early cautions, was left wrecked in the grass along with teammate Clint King, leaving all three B.J. McLeod cars in the final three positions. Cole Custer and Spencer Gallagher, who both took hard hits in the wreck, rounded out the Bottom Five.

LASTCAR STATISTICS
*This marked the first time in NASCAR history where the #99 finished last in both the XFINITY and Truck Series point races on the same weekend.
*The #99 had not finished last in an XFINITY Series race since May 26, 2007, when David Reutimann’s #99 Aaron’s Dream Machine Toyota lost an engine after 4 laps of the Carquest Auto Parts 300 at Charlotte. 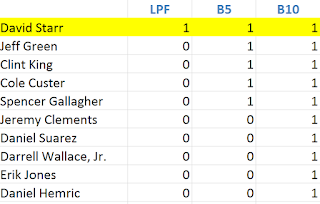