Matt Kenseth picked up the 3rd last-place finish of his NASCAR Monster Energy Cup Series career in Sunday’s 59th Annual Daytona 500 at the Daytona International Speedway when his #20 DeWalt FlexVolt Toyota was involved in a multi-car accident after 103 of 200 laps.

The finish, which came in Kenseth’s 615th series start, was his first in a Cup race since March 1, 2009, during the Shelby 427 at Las Vegas.  That day, 284 races ago, Kenseth’s #17 USG Ford lost an engine after 6 laps, putting an end to a two-race winning streak that included his first of two Daytona 500 victories.

Kenseth’s move from Roush-Fenway Racing to Joe Gibbs Racing in 2013 continues to pay dividends.  That season was his winningest to date, seven checkered flags en route to a close 2nd in the championship hunt to Jimmie Johnson.  Another championship bid in 2015 stirred a fierce rivalry with Joey Logano, culminating in a crash at Martinsville that took Logano out of the title hunt and parked Kenseth for two races.  He recovered nicely last season, winning only twice but coming just short of the Final Four at Homestead.

This year, Kenseth arrived in Florida with a familiar-looking black-and-gold paint scheme.  For the first time since his victory in the 2009 running, DeWalt Power Tools would be his Daytona 500 sponsor.  The car ran 14th-fastest in opening practice and vaulted him to the second round of qualifying, 9th overall, with a speed of 192.016mph.  A 5th-place finish in Race 1 of the Can-Am Duels secured him 9th on the grid for the 500, and he ran 15th and 2nd in the following two practices before sitting out Happy Hour.  Combined with an 11th-place showing in the Clash, Kenseth was a favorite to win his third Daytona 500.

Starting 40th on Sunday was Elliott Sadler in his first start for Tommy Baldwin Racing.  Having sold their charter late last season, Baldwin scaled back to a part-time effort in 2017, and Sadler locked himself into his first 500 since 2012 with a fast lap in qualifying.  Edged by D.J. Kennington for a transfer spot in Duel Race 2, Sadler fell back on that speed and rolled off in the rear.  He was shortly joined by Jimmie Johnson, Paul Menard, and Ryan Blaney, who were all sent to backup cars after Thursday’s Duels.

When the green flag flew, last place switched to Brendan Gaughan, making his first 500 start since 2004.  Coming off a strong 5th-place finish in the XFINITY race the night before, Gaughan had also locked himself in on speed for an Open team.  Car owner and oil businessman Mark Beard, an aspiring racer in the 1980s, assembled a team over the offseason, acquiring an engine and chassis from Richard Childress Racing.  As fast as his car was, Gaughan began to lose the draft and followed Jimmie Johnson two-tenths of a second behind the pack.  Johnson’s #48 Lowe’s Chevrolet switched places on Lap 3, followed by rookie Erik Jones’ #77 5-hour Energy Toyota on Lap 4.

On Lap 7, when Matt DiBenedetto trailed in the #32 E.J. Wade Ford during his first start for Go FAS Racing, the tail end of the field began to break up.  Following Jeffrey Earnhardt in The Motorsports Group’s first-ever points race on a plate track (with the Charter from Circle Sport), DiBenedetto and Earnhardt’s #33 Starter Chevrolet fell from eight-tenths behind the pack on Lap 8 to nearly 10 seconds back on Lap 12.  DiBenedetto retained the spot until the 14th circuit, when Joey Logano’s #22 Shell / Pennzoil Ford pitted from 4th for a loose right-front wheel.  The stop nearly put Logano a full lap down, though he managed to stay right in front of the leaders as others began to short-pit.

Next to take 40th was rookie Daniel Suarez.  On Lap 19, the defending XFINITY Series champion crossed paths with Erik Jones on pit road, and Suarez’s #19 ARRIS Toyota was the first car to be lapped.  He had lost a second circuit when the first caution fell on Lap 29 for an accident involving fellow rookie Corey LaJoie in the #83 Dustless Blasting Toyota.  LaJoie’s crash damage suffered in a pit entrance miscue was repaired quick enough under NASCAR’s new Five Minute Rule that he remained on the lead lap and Suarez stayed last.

Another last-place contender arrived in the form of David Ragan.  Back with Front Row Motorsports after nearly two seasons, Ragan acquired last-minute sponsorship for his #38 from Camping World and showed speed in his Duel.  Unfortunately, a tight race between himself and Ricky Stenhouse, Jr. on Lap 51 caused Ragan to smack the outside wall off Turn 4.  Ragan still managed to make it around the track without a caution and returned inside of five minutes, but cost him two laps to the leaders, dropping him to last behind Suarez on Lap 53.  For the next 40 laps, Ragan would continue to lose ground after several lengthy green-flag stops.  He was three down on Lap 60, five down on the 85th, eight down on the 95th, and 12 down on the 102nd.  One of the only cars multiple laps down, Ragan looked poised for his first Daytona 500 last-place finish since 2012.

Then came Lap 104.  Leading at the time was Segment 1 winner Kyle Busch, weaving through lapped traffic ahead of Erik Jones, Matt Kenseth, and Dale Earnhardt, Jr.  Kenseth recovered from an early pit penalty to join his teammate up front, which looked like the right place to be as Segment 2 neared its finish.  Suddenly, Kyle Busch’s #18 M&M’s Toyota broke loose in Turn 3, blocking the path for Jones and Kenseth.  All three cars collided, and Kenseth was struck in the rear by Ty Dillon’s #13 GEICO Chevrolet.  Earnhardt, Jr. was also involved, as was Sadler, who suffered cosmetic damage.  Of those wrecked, Busch, Jones, and Kenseth were unable to continue and, under NASCAR’s new wrecked car policy, could not return to the race.  Kenseth, ranked behind Jones and Busch, led the group down the rankings.  On Lap 115, Kenseth took 40th from Ragan for good.

Jones and Busch finished 39th and 38th, respectively, followed by Earnhardt, Jr., who turned into the garage after the ensuing red flag.  Rounding out the group was Canadian D.J. Kennington, whose #96 Lordco Auto Parts / Castrol Toyota was eliminated in the fifth caution on Lap 129.  After dodging LaJoie’s wreck earlier in the race, Kennington entered Turn 3 when Jamie McMurray turned Jimmie Johnson, triggering the day’s biggest pileup.  Kennington hugged the low line and slowed down, but couldn’t avoid the rear of Johnson’s car.  The two made contact, tearing up the right-front of the #96 and sending him behind the wall.

Taking the victory on Sunday was Kurt Busch, who bounced back from a last-place finish in the Clash to earn his first-ever restrictor-plate points race victory.  Matt DiBenedetto recovered to finish 9th, the best finish for owner Archie St. Hilaire since his series debut in 2012.  Brendan Gaughan came home 11th, bouncing back from a late-race spin in an impressive debut for the Beard Oil team.  And 18th-place Cole Whitt led 3 laps late and hung onto a Top 10 until the final moments, handing TriStar Motorsports its best Daytona 500 showing since Loy Allen, Jr. won the pole and finished 22nd in 1994.

The 500 also marked the 784th and final Cup start for Michael Waltrip.  Ranked 14th in the all-time last-place standings with 17 career NASCAR last-place finishes, but none since 2008, the two-time Daytona 500 winner finished an impressive 8th in his Aaron’s Toyota.  It was not only Waltrip’s best finish since 2013, but also handed Jay Robinson’s team Premium Motorsports its first-ever Top 10 finish in Cup.

LASTCAR STATISTICS
*This marked the fourth last-place finish for the #20 in the Daytona 500.  All four occasions came during the time Joe Gibbs Racing used the number: 2002 and 2007 (Tony Stewart), 2009 (Joey Logano), and 2017 (Kenseth).  As of this writing, Logano has not finished last in another Cup points race since.
*This marked Kenseth’s first last-place finish at Daytona. 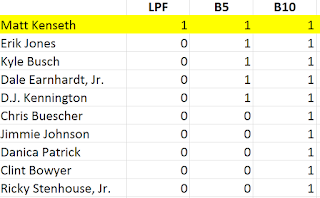 UPDATE: Added details from Kenseth's performance through the first part of SpeedWeeks 2017.
Posted by Brock Beard at 8:13 PM