Matt DiBenedetto picked up the 15th last-place finish of his NASCAR XFINITY Series career in Saturday’s Ticket Galaxy 200 at the Phoenix International Raceway when his unsponsored #10 TriStar Motorsports Toyota fell out with a vibration after 3 of 200 laps.

The finish, which came in DiBenedetto’s 67th series start, was his 13th of the season and first since Dover, four races ago.  He remains 10 finishes behind Jeff Green’s single-season record of 23, set with the same team last year.  However, he now ties Kevin Lepage for the third-most in series history.

Phoenix was DiBenedetto’s first start in the #10 since Dover.  Since then, he’d failed to qualify at Charlotte and crashed for a 36th-place run at Texas, but also scored a strong 11th-place run at Kansas in TriStar’s #14 Superior Essex Toyota.  For Phoenix, the #14 would go to Cole Whitt, who earlier this month announced he would not make any more Cup starts this season.  The #10 missed the Kansas race, and Jeff Green parked it once more at Texas for his 89th career XFINITY last-place run.  DiBenedetto was slated to do the same.

DiBenedetto was one of 44 drivers on the preliminary entry list, following another late entry on Wednesday of the Obaika Racing team with Ryan Ellis in the #77 and Josh Bilicki in the #97.  DiBenedetto ran a strong 19th in both practice sessions and qualified 29th with a speed of 130.411mph.  Missing the field were Ellis’ Obaika car, David Starr in RSS Racing’s #93 Massimo Motors Chevrolet, owner-driver Morgan Shepherd in the #89 Racing With Jesus Chevrolet, and Dexter Stacey, who on Thursday was again tabbed to drive for Derrike Cope in the #70 E-Hydrate / Ashurst American Honey Chevrolet.

Josh Bilicki’s Obaika #97 rolled off 40th on Saturday night, joined by Corey LaJoie and Brad Keselowski, whose cars were sent to the rear for unapproved adjustments.  DiBenedetto fell to the rear by the end of the first lap, already 9.462 seconds behind the leaders.  On Lap 2, he was 11.279 behind, then 25.908 on Lap 3, 11.809 behind 39th-place Mike Harmon.  That time by, DiBenedetto pulled the #10 behind the wall under green, the race’s first retiree.

Finishing 39th was two-time last-placer Timmy Hill in Motorsports Business Management’s #40 Phoenix Air / Utvint.com Toyota, out with brake issues.  38th went to Alex Bowman, who one day after winning his first Cup pole for Sunday’s race suffered the first of a series of hard crashes in Turn 3.  Jeff Green, who finished 21st in his last start for B.J. McLeod at Kansas, ended up 37th with his own wreck on Lap 93 in McLeod’s unsponsored #99 Ford.  Rounding out the Bottom Five in 36th was Ray Black, Jr., whose #07 ScubaLife Chevrolet narrowly missed a stack-up on the initial start only to crash in Turn 1 on Lap 106. 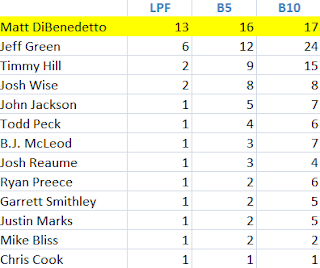 Do you think that Jeff Green will reach 100 last-place finishes?

He's certainly got a chance, but I don't think it will happen quickly. TriStar continues to trade drivers, and Green is running full-race efforts for B.J. McLeod.