Matt DiBenedetto picked up the 16th last-place finish of his NASCAR XFINITY Series career in Saturday’s Ford EcoBoost 300 at the Homestead-Miami Speedway when his unsponsored #10 TriStar Motorsports Toyota fell out with a vibration after 2 of 200 laps.

The finish, which came in DiBenedetto’s 68th series start, was his 14th of the season (3rd-most all-time) and second in a row.  Although on Sunday, he came just short of becoming the first driver to claim two LASTCAR titles in the same year, DiBenedetto now has sole possession of 3rd in the all-time LASTCAR XFINITY Series rankings.  Only Jeff Green (89 last-place finishes) and Jeff Fuller (24) have more.

This time, DiBenedetto returned to TriStar as one of 44 drivers on the preliminary entry list, a list that grew to 45 when Mario Gosselin added his #90 BuckedUp Apparel / CrashClaimsR.Us Chevrolet last Tuesday.  DiBenedetto again put up fast times, running 20th in Friday’s opening practice, 29th in Happy Hour, then ran 24th in the first round of qualifying with a lap of 163.895mph.  He stood on his time in Round 2, and would roll off in that spot on Saturday.

Five teams missed the show.  Fastest of the group was David Starr, who looked to make his first start since Texas in RSS Racing’s #93 Massimo Motors Chevrolet.  Morgan Shepherd failed to qualify for the seventh time in 2016 (not counting three withdrawals).  Though his #89 Racing With Jesus Chevrolet never finished a race this year, nor came home better than 34th, he did not score a single last-place finish.  Mike Harmon’s #74 FallenSoldiersMarch.com Dodge missed the cut for just the fourth time this year, and for the first time on a non-restrictor plate track.  Dexter Stacey ended the year 1-for-3 in attempts for Derrike Cope Racing’s #70 E-hydrate Chevrolet, and Ryan Ellis was unable to join Obaika Racing teammate Josh Bilicki.

Starting 40th for Saturday’s race with the Past Champion’s Provisional was none other than all-time last-place leader Jeff Green, again in B.J. McLeod’s unsponsored #99 Ford.  DiBenedetto joined Green at the back for the start, surrendering his 24th-place on the grid for an early exit.  At the end of Lap 1, DiBenedetto was already 6.946 seconds behind the leader, then 25.673 on Lap 2 as he prepared to pull down pit road.  He crossed the stripe as he exited the race under green, securing the last-place run.

39th went to Timmy Hill, who stayed out to lead three laps during the race’s second caution for Ryan Reed’s spin in Turn 2.  Hill’s #40 Phoenix Air / Utvint.com / OCR Gaz Bar Toyota had brake issues 41 laps after DiBenedetto’s retirement.  38th went to Gosselin, who prior to Hill’s troubles had an extended stay in the garage for a broken radiator hose.  The resulting overheating issues didn’t go away, and Gosselin’s #90 pulled out after he passed Hill.  37th went to Joey Gase, whose Jimmy Means Racing crew got a scare when something ignited under the hood on pit road.  Ignition failure was the official listed cause for the #52 Donate Life Florida Chevrolet’s short day.  Rounding out the Bottom Five was Truck Series racer Jordan Anderson, whose first race for Precision Performance Motorsports ended when his #46 UrbanCarryHolsters.com Chevrolet was collected in a multi-car wreck on the backstretch, starting a fire.  No drivers were injured.

LASTCAR STATISTICS
*This marked TriStar Motorsports’ fourth-straight last-place finish in the XFINITY race at Homestead and the fifth in the last seven. 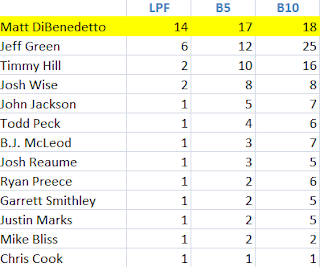