Jeff Green picked up the 89th last-place finish of his NASCAR XFINITY Series career in Saturday’s O’Reilly Auto Parts Challenge at the Texas Motor Speedway when his unsponsored #10 TriStar Motorsports Toyota fell out with brake issues after 1 of 200 laps.

The finish, which came in Green’s 447th series start, was his sixth of the season and first since this past summer at Mid-Ohio, 10 races ago.

Texas was Green’s first start in the TriStar #10 since Road America, where he was edged for last by a wrecking Garrett Smithley.  He drove the team’s #14 in another five races, never finishing under power or running better than 30th.  Last month at Kansas, however, he picked up his third full-race effort of the season, following up on his 27th at Bristol and 7th at Daytona with a 21st for B.J. McLeod in the team’s struggling #99 Ford.

Green’s lone DNQ of 2016 came at the Texas track in April, but this time a starting spot was assured - just 40 drivers arrived to fill the 40-car field.  He put up the 27th-fastest time in the opening practice, was one of four drivers to skip Happy Hour, and earned the 31st starting spot with a lap of 174.808mph.

Starting 40th on Saturday was Matt Waltz, who along with Ryan Ellis were once again late assignments to the Obaika Racing Chevrolets.  At the start, Waltz was joined by both Green and the #07 ScubaLife / CDA.edu Chevrolet of Ray Black, Jr., each by driver’s choice.  While Waltz, Ellis, and Black all finished outside the Bottom Five, Green pulled off the track on the second lap, securing the last-place run.

39th went to Morgan Shepherd, the eighth time his #89 Racing With Jesus Chevrolet has finished in that spot all season.  Despite finishing no better than 34th all season, Shepherd has yet to finish last in 2016.  38th went to Timmy Hill, whose two-race streak of lasts at Charlotte and Kansas ended.  Hill’s #40 OCR Gaz Bar / TLC Vacations Toyota showed some speed in practice, though the team had to drive on scuffed tires.  37th went to Dexter Stacey, as for only the third time this season Derrike Cope did not drive his own #70 Abdito Vodka / E-hydrate Chevrolet.

Rounding out the Bottom Five was 2016 LASTCAR XFINITY Series champion Matt DiBenedetto, who was brought into NASCAR’s concussion protocol following a hard Turn 4 wreck on Lap 134.  DiBenedetto, driving the same #14 Superior Essex Toyota that Green piloted 15 times this season, sat out the Sprint Cup race as a result.

LASTCAR STATISTICS
*This marked TriStar’s seventh last-place run in the last 12 XFINITY Series races at Texas, and is Green’s second in a row in this event. 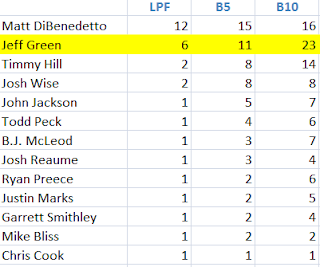