Spencer Gallagher picked up the 1st last-place finish of his NASCAR Camping World Truck Series career in Friday’s Lucas Oil 150 at the Phoenix International Raceway when his #23 Allegiant Travel Chevrolet was involved in a single-truck accident after 11 of 150 laps.  The finish came in Gallagher’s 57th series start.

The enthusiastic 26-year-old from Las Vegas began his NASCAR odyssey at age 12, running in short track Bandolero and Legends Car competition.  In 2009, he caught the eye of car owner T.J. Clark, who in 1995 was edged for the inaugural LASTCAR Truck Series championship by John Kinder in a bottom-five tiebreaker, 7-4.  In 2011, with sponsorship from Allegiant Air, the commuter airline owned by his father Maury, Gallagher drove Clark’s blue #23 in a combined 11 K&N Pro Series West, K&N Pro Series East, and ARCA events.  His best run of the season was a 7th in the West event on the Portland International Raceway road course, where he finished 7th.  One of his K&N cars was the Chevrolet which Max Papis drove to a close 2nd in the XFNITY race at Montreal in 2010.

In 2012, Gallagher competed in his first full ARCA season, earning six Top Tens, including a season-best 7th at Winchester, and a 7th-place rank in the points.  At mid-season, he began to race for his family’s team, which Gallagher Motorsports, which later became the present-day GMS Racing.  Driver and team nearly scored their first win the following season, leading 10 laps at Salem before Tom Hessert III took the lead on a last-lap green-white-checkered finish.  It wasn’t until his 51st and most recent ARCA race, the 2014 finale at Kansas, that Gallagher took the checkered flag, charging from next-to-last in the 33-car field.

At the time of the Kansas victory, Gallagher and GMS had already broken into NASCAR, making 12 starts over two seasons in the Truck Series.  He made his debut at Kansas on April 20, 2013, finishing 22nd after a late-race crash.  At Talladega on October 18, 2014, he made a thrilling last-lap high-lane charge to come home 3rd, the first time he’d finished better than 11th in NASCAR.  With the ARCA phase of his career done, Gallagher went full-time Truck racing in 2015, coming home 10th in the series standings.

All the while, GMS continued to build its program, thanks to a 2014 technical alliance with Richard Childress Racing.  The #21, which Gallagher drove part-time in 2013, remained alongside his present #23, and in 2014 the team signed Kyle Busch driver Joey Coulter, then Brennan Poole.  In October came the #33 team, acquired from Turner Scott Motorsports, bringing such drivers as Brandon Jones and Grant Enfinger.  Austin Dillon gave the team its first win at Loudon.  This year, the team added a fourth part-time truck, #24, with its own mix of Cup regulars and rising stars.

Gallagher and GMS Racing have continued to make headlines in 2016.  Johnny Sauter, who left ThorSport for GMS this season, scored three wins and qualified for the Truck Series’ inaugural Chase.  After parting ways with Red Horse Racing, Ben Kennedy put the GMS #33 into victory lane at Bristol.  At Phoenix, Sauter, Kennedy, and Gallagher would be joined by rookie Kaz Grala, who’s shared GMS’ #24 with Kennedy, Grant Enfinger, and Shane Lee, as well as Cup drivers Kyle Larson and Clint Bowyer.

Gallagher himself spearheaded the team’s XFINITY Series effort in 2016, debuting the #21 Kingman Chevrolet-Buick / Allegiant Travel Chevrolet Camaro at Phoenix with a 23rd-place run, then earning a season-best 8th at Daytona in July.  On the Truck Series side, he finished inside the Top Ten for five straight races after the season opener.  He ran strong at Gateway, where he narrowly missed his first win the year before, but was taken out in a wreck with John Wes Townley, culminating in an on-track fight between the two.  He led late at Mosport before being spun from 2nd in the final laps.  He was again strong at Talladega, working over teammate Grant Enfinger before coming home 2nd.  And his second of two poles this season came last week at Texas, where he led 88 of 147 laps, but a slow pit stop left him a disappointing 7th.  While outside the inaugural Truck Series chase, Gallagher came to Phoenix 12th in the series standings.

Originally, 32 drivers arrived to make the 32-truck field.  A 33rd entry, Tommy Joe Martins, was added last Wednesday.  Martins’ late addition was a surprise - he had qualified for every race in 2016, including the spring race at Martinsville, where he sold his spot to Austin Wayne Self.  But it was a rough weekend for Martins Motorsports.  The driver lost one of his last two trucks in a crash at Texas, meaning he wouldn’t have a backup for Phoenix.  While the team did manage to qualify for Friday’s race in the 22nd spot, Martins was suffering a bad ear pain.  After several trips to the infield care center, he considered “start-and-parking” his entry.  He felt well enough to race, but unfortunately, an early crash eliminated him from the event.  Curiously, the cause of the wreck was Self.  As of this writing, Martins does not have a truck ready for Homestead and his plans for 2017 are up in the air.  If you’d like to help out, consider picking up one of his fan shirts here or, for sponsorship offers, check out his website here.

Starting 32nd was Jennifer Jo Cobb.  Cobb, who again drove MAKE Motorsports’ #1 Pit Stops For Hope / Grimes Irrigation Chevrolet, fielded the only truck to miss the show.  This time, the driver of her #10 Chevrolet was Tommy Regan, who brought with him sponsors Gaems and Unique AR’s.  She was joined at the rear by Norm Benning and Travis Kvapil, who missed the drivers meeting.  Kvapil had also hit the wall in MAKE’s #50 during practice.  Cobb and her group only held the spot for less than a lap, however, as Myatt Snider, the 21-year-old son of longtime pit reporter Marty Snider, spun off the nose of Austin Cindric.  Snider, driving the #22 The Original Louisiana Hot Sauce Toyota in place of Austin Wayne Self, who climbed aboard Jeff Bolen’s #66, recovered to finish 17th.

Eight laps after the restart, Gallagher was still running mid-pack when an apparent flat tire sent his truck skating up the track in Turn 1, sending him backward into the outside wall.  The damage was enough to end his night, making him the first retiree of the evening.

Finishing 31st was Amherstburg, Ontario driver Dominique Van Wieringen, who made her Truck Series debut after finishing 9th in this year’s K&N Pro Series East championship.  With backing from her K&N sponsor Durobyte, Van Weiringen recovered from a spin in practice to put Randy Young’s #02 Ford 24th on the grid, but was eliminated in the wreck between Austin Wayne Self and 30th-place finisher Tommy Joe Martins.  29th went to Jordan Anderson, who didn’t have a ride 15 hours before the race until Mike Harmon tabbed him to drive the #74 Chevrolet.  Anderson put the Harmon machine 25th on the grid and was still on the track near the midpoint when the engine let go.  Kaz Grala’s GMS truck rounded out the Bottom Five after a hard crash on Lap 77.

LASTCAR STATISTICS
*This marked the first time the #23 finished last in a Truck Series race since August 18, 2010, when Jason White’s GunBroker.com / Outdoor Channel Outfitters Dodge lost the engine after 28 laps of the O’Reilly 200 at Bristol.
*The #23 had not finished last in a Truck race at Phoenix since October 26, 2001, when Lance Hooper’s National Wild Turkey Federation Chevrolet had brake issues on the opening lap of the Chevy Silverado 150.
*This marked Chevrolet’s ninth-straight Truck Series last-place finish. 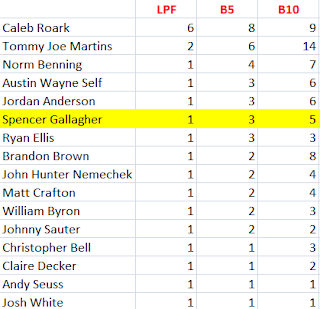