Ryan Truex picked up the 1st last-place finish of his NASCAR Camping World Truck Series career in Friday’s Ford EcoBoost 200 at the Homestead-Miami Speedway when his #81 Chiba Toyopet Toyota fell out with engine trouble after 49 of 134 laps.  The finish, which came in Truex’s 19th series start, made him the 12th first-time last-place finisher in 2016.

The two-time K&N Pro Series East Champion and younger brother of Martin Truex, Jr. has continued to fight to make a name for himself in NASCAR’s top three divisions.  He made his XFINITY Series debut in 2010, his first in Trucks in 2012, and debuted in Cup in 2013.  He and fellow newcomer Alex Bowman signed with BK Racing for a run at the 2014 Cup Rookie of the Year, but both struggled.  Truex was released by the September race at Loudon, and other than a four-race XFINITY stint for Biagi DenBeste Racing in 2015, had been missing from the grid.

This year, Truex signed with Hattori Racing Enterprises, a part-time XFINITY and Truck Series operation owned by Shigeaki Hattori.  Hattori, a former open-wheel racer with ten Truck starts as a driver, planned at least a partial schedule with Truex, contingent on sponsorship.  During the season opener at Daytona, Truex nearly came up big, finishing a close 2nd to Johnny Sauter when a last-minute caution froze the field.  It was far and away the best finish for Hattori, who himself ran no better than 27th in the series, and whose team ran 17th in its only two previous starts.

Heading into Homestead, Truex had racked up three more Top Tens: a 6th at Kansas, 8th at Dover, and another 8th at Talladega.  No less than ten sponsors signed with the team for one and two-race deals, but still the team was only able to run 15 of the season’s 23 races.  Still, the team qualified for each race they attempted and failed to finish just once - at Michigan, where the rear gear failed in the final laps.  Following a 21st-place showing at Texas, the team skipped the next-to-last race at Phoenix, then eyed a return at Homestead.

Truex was one of 35 drivers who arrived to attempt the 32-truck field for the season finale.  Among them was Tommy Joe Martins, whose team labored for a full week to rebuild the truck that wrecked at Texas.  Chassis 025, nicknamed “The Unlucky Lady” by Martins Motorsports, made it to Homestead, but was a handful in qualifying.  29th in both practices, Martins ended up the fastest truck to miss the show, a half-second short of bumping Austin Wayne Self for 27th.  Joining the #44 Boot Daddy / Diamond Gusset Jeans Chevrolet on the ride home were Jennifer Jo Cobb, who was a late entry in her #10 DRiven2Honor.org Chevrolet, and Norm Benning.  Benning, once again driving for Mike Mittler in the #63 Strategic Public Affairs Chevrolet, made just eight starts in 2016, his fewest in the series since 2008.

Truex, meanwhile, earned a strong 15th-place run in qualifying and had run 17th and 20th in the twin practice sessions.

Starting last in Friday’s race was Travis Kvapil, who returned to MAKE Motorsports’ #1 CorvetteParts.net Chevrolet.  By Lap 2, 32nd fell to his teammate, Spencer Boyd, in the #50 GruntStyle.com Chevrolet, who after eight laps was already 19.7 seconds behind the leader.  Boyd still trailed the field on Lap 15, when the first yellow fell for Stewart Friesen’s spin off the fourth corner in the #16 Halmar International Chevrolet.  Friesen fell to last as a result, then climbed ahead of Matt Tifft, who took last on Lap 32 in his #11 Brain Gear / Surface Sunscreen Toyota for Red Horse Racing.  Friesen retook the spot from Tifft on Lap 40 and held it until the second caution, drawn by Patrick Staropoli.

Staropoli’s night in Bobby Dotter’s #07 Auto Nation Cure Bowl proved a struggle as he drew three of the night’s four cautions for spins and accidents.  But for all his issues, he still finished under power, nine laps down, in 31st.  Between his second and third incident, Truex had pulled into the garage, having reported smoke in the cockpit.  The discovered engine problem proved terminal, and the #81 was done for the night.  His turned out to be the only DNF of the evening.

Staropoli, Boyd, and Friesen finished 31st, 30th, and 29th, respectively.  Rounding out the Bottom Five was Reed Sorenson, who stayed out during the first caution to lead Lap 17, then settled back for a 28th-place finish in Premium Motorsports’ #49 Chevrolet.

LASTCAR STATISTICS
*This marked the first last-place finish for the #81 in a Truck Series race since August 13, 2013, when Ricky Ehrgott’s #81 Platinum Wealth Partners / Rev1 Power Services Toyota was eliminated in a single-truck accident after 2 laps of the Pocono Mountains 125 at Pocono. 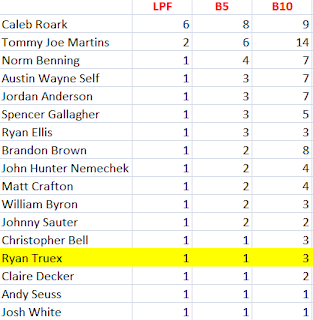