Norm Benning picked up the 9th last-place finish of his NASCAR Camping World Truck Series career in Friday’s Striping Technology 350 at the Texas Motor Speedway when his unsponsored #63 MB Motorsports Chevrolet fell out with engine trouble after 22 of 147 laps.

The finish, which came in Benning’s 163rd series start, was his first of the season and first in a Truck Series race since last summer at Texas, 34 races ago.

The last two seasons have been proven particularly difficult to the 64-year-old veteran.  After making ever Truck Series race in 2014, his first full season in four years, he missed four of the final seven in 2015, often by one or two spots.  His streak of missing races extended into the first part of this season, reaching 11 consecutive events.  Even the Eldora race, site of perhaps his proudest moment in 2013, has not been a guarantee: after making the first three runnings, he missed the show this year.  In all, Norm Benning Racing’s #6 has made just three starts this season - one each with Benning, Sean Corr, and Ryan Ellis - and has finished no better than 30th.

Benning has made another six starts in 2016, thanks to Mike Mittler and MB Motorsports.  The team’s best finish of the year was once again at Eldora, where dirt tracker Bobby Pierce came even closer to claiming an impressive victory.  Benning’s first start with the team at Kentucky in July ended the streak of missed races, and at Canadian Tire Motorsports Park in September (where friend of the website Rob Taylor worked as spotter), he finished 20th, his best run since Eldora in 2015.  His most recent start for Mittler came at Las Vegas, where he ran 26th.  After withdrawing his #6 at Talladega, he skipped the next round at Martinsville, then returned to Mittler for Texas.

With 35 trucks competing for 32 spots, the Mittler team’s rank in Owner Points would again help keep Benning on the track.  His plain black #63 ran 33rd fastest in the opening session, then ran a ap of 170.535mph in qualifying.  The lap, good enough to secure him 31st on the grid, was third-slowest of the session.  Missing the field were Tommy Regan, looking to make his first start of the season in a #78 American Tactical / Unique AR’s Chevrolet fielded by XFINITY Series owner-driver B.J. McLeod; Mike Harmon in his #74, and Ryan Ellis, who on Wednesday was brought on by Jennifer Jo Cobb to drive her #10 Grimes Irrigation & Construction Chevrolet.

Starting last in the field was Cobb herself, whose matching #1 from the MAKE Motorsports stables ran the slowest lap in time trials.  She ended up finishing 30th, the final truck to come home under power.  Benning retired early under green, before the first of three complete runnings of the Caution Clock.  Between Benning and Cobb was 31st-place Tommy Joe Martins, who was quite hard on himself after a crash battered his #44 Diamond Gusset Jeans / RPM Trailers Chevrolet.  Matt Mills ended up 29th, seven laps behind in Bobby Dotter’s #07 Thompson Electric Chevrolet.  Rounding out the Bottom Five was 28th-place Cody Coughlin, driving the #05 Zaxby’s / JEGS Chevrolet in place of John Wes Townley, who was out with an injured left ankle.

LASTCAR STATISTICS
*This marked the first last-place finish for the #63 in a Truck Series race since November 7, 2014, when Justin Jennings’ run in MB Motorsports’ Mittler Bros. Machine & Tool Chevrolet ended with a first-lap crash in the Lucas Oil 150 at Phoenix.  Jennings also scored the Mittler team’s most recent last-place run in the series, which came September 26, 2015 at Loudon, where he drove the team’s #36. 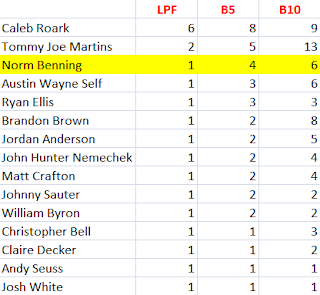