Martin Truex, Jr. picked up the 6th last-place finish of his NASCAR Sprint Cup Series career in Sunday’s Can-Am 500 at the Phoenix International Raceway when his #78 Furniture Row / Denver Mattress Toyota fell out in a two-car accident after 258 of 324 laps.

The finish, which came in Truex’s 404th series start, was his second of the year and first since Talladega, three races ago.

The engine failure which handed Truex that last-place run in Alabama eliminated driver and team from Chase contention, so the final four races would be played for pride.  In the two races since, the #78 showed the same speed that carried it to four wins this season.  Truex won his fifth pole of the season at Martinsville, his first on a Cup short track, led 147 laps in the first half, and came home 7th.  He looked even better at Texas, leading 66 laps and threatening to pull the victory until Carl Edwards caught him just before a race-ending rain storm, leaving him 3rd.

Next on the schedule was Sunday’s race at Phoenix, a track where Truex has had mixed results.  In 21 previous starts, his best finish was a 5th back in 2009, when he won the pole for Dale Earnhardt, Inc.  He also had just two DNFs, but each were last-place finishes during two separate fall races: 2008 and 2012.

When Truex arrived at the track on Friday, things didn’t go much better.  A crash during opening practice sent him scrambling to a backup car, which could not get through inspection in time to qualify.  This left Truex 40th and last on the grid for the first time since Talladega in the fall of 2015.  He then rose once more, topping the charts in Saturday’s second practice and running 9th in Happy Hour.  The team decided against changing engines, though the “tail end of the field” penalty would not change their situation.  Landon Cassill would join him on Sunday for a rear gear change on his #38 MDS Transport Ford.  40 drivers once again arrived to make the 40-car field, so no teams were sent home.

On the first lap of the race, a tight battle up front nearly led to disaster.  Kyle Larson’s move to the inside of Joey Logano in Turn 3 sent both cars sliding up the track, then Larson into a spin, and Trevor Bayne spun out to avoid them both.  Ironically, the only damage suffered in the incident happened to Tony Stewart, whose #14 Mobil 1 Chevrolet suffered a small puncture on the nose.  First Larson, then Stewart exchanged last under the yellow, and Larson’s #42 Target Chevrolet once again trailed on the Lap 6 restart.

On Lap 9, Reed Sorenson took 40th from Larson.  If he finished in that spot, he would clinch his first LASTCAR title, breaking a tie with Josh Wise and Matt DiBenedetto.  For Phoenix, Sorenson had switched rides at Premium Motorsports to the #98 Speed Stick Chevrolet, allowing two-time NASCAR Pinty’s Series champion D.J. Kennington to make his series debut in the #55.  Kennington’s red-and-white Northern Provincial Pipelines Chevrolet took last from Sorenson, followed on Lap 17 by Gray Gaulding in the #30 Feed The Children Chevrolet from The Motorsports Group.

The 20th time by, Gaulding was the first to be lapped, and he would hold the spot for most of the day.  On Lap 64, an extended stop from the #30 team dropped him three laps behind, and when he stalled the car after a four-tire stop on Lap 129, he was then eight down.  Gaulding’s stranglehold on the 40th spot seemed complete until the restart on Lap 217, when Austin Dillon slowed in front of Greg Biffle and Jimmie Johnson.  The incident sent both Johnson and Dillon to the garage area - the former with significant damage to the nose, requiring a new radiator, and the latter with an apparent battery or electrical issue.  Johnson took last from Gaulding on Lap 228, and Dillon fell to 39th on Lap 235, lifting Gaulding to 38th.  Johnson returned to the track first on Lap 241, dropping Dillon to last on Lap 250.  Dillon returned nine laps later, putting all 40 cars on track once more.

Truex entered the picture following another wreck in Turn 1.  Already two laps down following a penalty for passing the pace car on pit road, his #78 was shoved up the track by Ryan Newman’s #31 Cat Minestar Chevrolet.  While Newman managed to avoid the outside wall, Truex backed into it hard, destroying the rear clip.  After swerving off pit entrance to return to the track, Truex pulled his Toyota behind the wall.  With 39 laps to go in regulation, NBC’s leaderboard indicated Truex, now 38th, was out.  With Johnson and Dillon still on track, Truex took last on Lap 293.

39th-place Dillon and 38th-place Johnson both finished under power, 35 and 28 laps down, respectively.  37th went to Gaulding, who lost the fuel pump in the final moments.  The double-overtime finish left Gaulding on the same lap as Johnson, but the #48 took the 38th spot.  Sorenson, nine laps back, rounded out the Bottom Five.  Next week at Homestead, both Sorenson and Matt DiBenedetto can take the LASTCAR title by finishing last one more time, otherwise it will go to current leader Josh Wise. 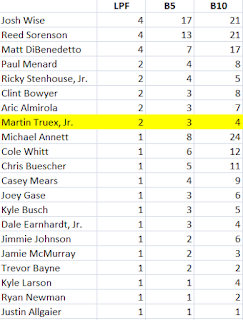