Josh Wise picked up the 9th last-place finish of his NASCAR Sprint Cup Series career in Sunday’s AAA Texas 500 at the Texas Motor Speedway when his unsponsored #30 The Motorsports Group Chevrolet fell out with electrical problems after he completed 257 of 293 laps.

The finish, which came in Wise’s 156th series start, was his fourth of the season and first since Loudon, 15 races ago.  With two races to go, Wise takes the lead in the 2016 LASTCAR Cup Series championship.  He prevails on a Bottom Five tiebreaker over Reed Sorenson and Matt DiBenedetto of 17 to 12 to 7, respectively.  This year has become one of the closest title battles in LASTCAR history.

Since his most recent Cup last-place finish in July, Wise made one XFINITY Series start for B.J. McLeod at Dover, where he fell out on Lap 2 when his engine let go, and his first Truck Series start in four years, finishing 27th in Premium Motorsports’ #49 ChampionMachinery.com Chevrolet at Loudon.  His focus has remained on Sprint Cup, where he’s continued to help The Motorsports Group (TMG) develop its single-car Open team through its first full season.  In that span, he earned his season-best finish at Watkins Glen, a 26th, and brought new sponsorship from Incredible Bank.  Through it all, Wise missed the field for only five races: the four restrictor-plate events and Indianapolis.

On October 20, just after TMG announced they would not enter the second Talladega race, the team announced that Truck Series newcomer Gray Gaulding will be driving the #30 in place of Wise at Martinsville, Phoenix, and Homestead.  New sponsorship for the Gaulding effort would come from the Feed the Children organization.  The team’s only remaining race of 2016 - Texas - would more than likely be Josh Wise’s last Cup start of the season.

Wise came into Texas third in the 2016 LASTCAR Cup Series standings, one finish behind both Reed Sorenson and Matt DiBenedetto.  Due to the aforementioned Bottom Five tiebreaker (in which Wise held the 2016 record), Wise could secure the title if he finished last at Texas so long as Sorenson and DiBenedetto did not trail Phoenix or Homestead.

Wise was one of 41 drivers on Texas’ preliminary entry list.  But when Premium Motorsports withdrew its #98 Chevrolet for the third straight race, and Cole Whitt tweeted that he did not have plans to run Cup the rest of the year, the remaining entrants all secured spots in the field.  Wise turned the slowest lap in Friday’s opening practice, secured the last starting spot with a speed of 180.741mph, then trailed both practices on Saturday.

When the field finally rolled onto the track after a lengthy rain delay, Wise was joined by the #83 ZAK Backs the Blue Toyota.  LASTCAR challenger Matt DiBenedetto qualified the car, but was under NASCAR’s concussion protocol following a hard wreck late in Saturday’s XFINITY Series race.  Jeffrey Earnhardt came on board, and the driver change sent him to the rear.  After nearly 20 unscored laps to finish drying the track, Earnhardt ran behind Wise for the next five circuits of a green-yellow start.

The green flag flew on Lap 6, and Wise dropped to last once more.  On Lap 11, he was 16.109 seconds behind the leader, 27.110 back on Lap 17, and was the first to be lapped the next time by.  The competition caution on Lap 30 brought Ryan Ellis into the fray.  Ellis, driving BK Racing’s #93 ScienceLogic Toyota for the second time this year and first time since Indianapolis, took the spot on Lap 29, followed by Jeffrey Earnhardt on Lap 30, then Wise as the field lined up for the restart on Lap 31.  On the restart, Ellis apparently made an unscheduled stop for a transmission stuck in second gear.  The crew worked under the car on pit road and got him back out after four laps, only to be penalized for speeding and lose a fifth.

Ellis held the 40th spot until around Lap 190, when Wise returned to the rear, nine laps behind to Ellis’ eight.  Ellis pitted on Lap 195, dropping him to ten laps behind, but Wise matched those laps and remained one spot behind.  Around Lap 245, Ellis made his move once more, this time taking a trip to the garage.  Now 16 laps down and counting with less than 100 to go, it looked as though Ellis was done for the day.  But on Lap 264, a grinding wreck between polesitter Austin Dillon and the lapped machines of Casey Mears and Brian Scott changed the race’s complexion.

Dillon and Mears were eliminated in the accident, becoming the night’s first retirees.  Mears, two laps down, ranked behind Dillon, who was on the same circuit as the leaders.  Ellis, still 40th, looked poised to edge them both for the spot, but during the same caution returned to the track 31 laps down.  Between 40th-place Ellis and 38th-place Mears was Wise, now 39th and more than 10 laps behind.  It now appeared that Mears and Dillon would drop to the final two spots with Mears scoring his second last-place finish in three Chase race.  On Lap 277, Mears was three laps away from taking 39th from Wise when Wise himself pulled off the track, his night done with electrical issues.  Those three laps prevented Wise from passing Mears for 38th, and both continued to lose laps to 40th-place Ellis.  If the race stayed green the rest of the way, Ellis would drop Wise to last on Lap 290.  Mears would follow on Lap 293.

However, Mother Nature threatened to keep last place from changing hands once more.  As rain approached the track, it wasn’t certain the race would even go the full 334 laps, much less 290.  As the mist turned to sprinkles, the final caution flew - on Lap 291.  By the narrowest of margins, Wise had taken last from Ellis, who would also pass Mears for 38th before the field headed down pit road.  Dillon ended up 37th with Joey Gase, back in the #32 Donate Life Texas Ford for Go FAS Racing, rounding out the Bottom Five, 13 laps down.

LASTCAR STATISTICS
*Wise, The Motorsports Group, and the #30 have swept both Texas races in 2016.  Wise also swept the spring weekend between the Cup and XFINITY Series events. 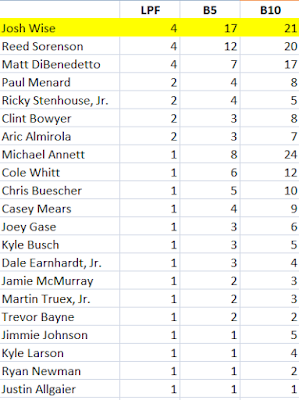