Aric Almirola picked up the 9th last-place finish of is NASCAR Sprint Cup Series career in Sunday’s Ford EcoBoost 400 at the Homestead-Miami Speedway when his #43 Smithfield Ford finished under power, 54 laps down, in the 267-lap race.

The finish, which came in Almirola’s 215th series start, was his third of the season and first since Kansas, five races ago.

Though Almirola and the “Petty Blue” Smithfield car rebounded with a season-best 8th-place finish at Talladega, the team finished mid-pack in the following three races, coming home 15th at Martinsville, then 22nd at Texas and Phoenix.  Coming into his home track at Homestead, Almirola sat just 26th in the standings, eager for a fresh start in 2017.  The race would also be the 53rd and final series start for teammate Brian Scott, who two weeks ago announced his retirement.

Almirola began the weekend 29th in the opening practice session and earned the 25th spot in qualifying with a lap of 175.092mph.  He missed bumping Jamie McMurray for a spot in Round 2 by just nine-hundredths of a second.  The #43 found some speed in Saturday’s first practice, jumping to 12th ahead of Chase drivers Kevin Harvick and Kyle Busch.  In Happy Hour, driver and team ranked 22nd.  For just the ninth time all season, more than four Open teams arrived to attempt the field - albeit just one - and Gray Gaulding’s #30 Feed The Children Chevrolet was too slow to make the cut.

Starting last for the fifth time in 2016 was Michael Annett, who has only one time all year qualified the #46 Pilot / Flying J Chevrolet any better than 33rd.  But during the pace laps, the big story was Chase contender Jimmie Johnson, sent to the rear for unapproved adjustments on the driver’s side A-post of his #48 Lowe’s Chevrolet.  Johnson didn’t spend much time there, and by the end of Lap 1, the spot fell to Dylan Lupton.

Almirola’s struggles began on Lap 65, when he pitted just before the first round of green-flag stops.  The decision, which cost Almirola two laps, came after the #43 had made contact with the outside wall.  From there, he remained down in the order, but outside the Bottom Five.  Lupton remained in 40th, losing more laps during the long green-flag stretches.  A fifth by Lap 97, a sixth by Lap 115, a seventh by Lap 129, an eighth by Lap 148, a ninth by Lap 165, and a 10th by Lap 168.

Just when it appeared Lupton would remain in 40th, handing the #32 its first last-place run at Homestead since Scott Pruett in 2000, Almirola’s day went from bad to worse.  On Lap 184, the #43 was suddenly eight laps down in 38th, having spent the previous few laps in the garage.  Another brush with the wall had broken something in the rear end housing, forcing extensive repairs.  Finally, the laps Almirola lost exceeded the rate at which Lupton lost his, dropping the #43 to the back on Lap 188.  Though it seemed the Richard Petty Motorsports team would not have enough time, they did manage to make repairs and send Almirola back on track on Lap 233.

While Almirola’s late return to the track meant that all 40 starters were still running, his issues all but ended the 2016 LASTCAR Cup Series Championship.  Stuck in a three-wide tiebreaker on Bottom Fives, Reed Sorenson and Matt DiBenedetto needed to finish last in order to snag away the title from Josh Wise.  At the time of Almirola’s return, DiBenedetto was 4 laps down and Sorenson was back 9, but there were only 34 laps to best Almirola’s 54 laps behind.  By the time the #43 returned to the track, both could not finish enough laps down to take 40th from Almirola.  In the end, both finished under power - Sorenson in 32nd and DiBendetto in 27th - while Almirola was never passed for last.

39th remained Lupton’s as the rookie finished 18 laps behind race winner and series champion Jimmie Johnson.  The remainder of the Bottom Five filled with three of the six retirees from a huge crash with 10 laps to go.  After contact between Chase contenders Joey Logano and Carl Edwards sent Edwards head-on into the inside wall entering Turn 1, the track closed.  38th went to Regan Smith, whose #7 Nikko RC / Road Rippers Chevrolet had to qualify on speed after Tommy Baldwin Racing sold its Charter to Leavine Family Racing with Circle Sport.  Smith struck the stopped car of Edwards after 37th-place Kasey Kahne, whose #5 Great Clips Chevrolet vaulted Edwards’ #19 ARRIS Toyota high into the air.  Rounding out the Bottom Five was Martin Truex, Jr., whose miserable second half of the Chase ended with a terrible fire that consumed his #78 Bass Pro Shops / Tracker Boats Toyota.  Fortunately, no drivers were injured.

Josh Wise clinched his first LASTCAR title on a three-way bottom-five tiebreaker of 17-13-7 over Sorenson and DiBenedetto.  It was the closest LASTCAR Cup championship since 2001, when Andy Houston prevailed in a four-way tiebreaker over Stacy Compton, Kyle Petty, and Rusty Wallace.  Like Houston, Wise did not race in the season finale.

Jimmie Johnson, who won the race and his record-tying seventh Cup Series title, earned his first last-place finish in his 529th start this past August at Watkins Glen.  He is the first driver to score the Cup championship in the same season as his first last-place finish since Matt Kenseth in 2003.  Johnson is also the second-straight Sprint Cup Champion to also finish last in the same year, following Kyle Busch’s early crash at Michigan in 2015.

Tony Stewart ended his career Sunday after 618 Cup starts and 49 victories.  He retires with nine last-place finishes across NASCAR’s top three divisions, seven of them in Cup.  Two of those seven, including his first, came in the Daytona 500 (2002, 2007).  His most recent was at Watkins Glen in 2015.  As of this writing, he stands tied for 18th in the LASTCAR Cup Series rankings and tied for 22nd all-time.

Brian Scott retired with just one last-place finish, which came at Talladega in 2015.

LASTCAR STATISTICS
*This marked the first last-place finish for the #43 in a Cup Series race at Homestead.
*This marked the first time the last-place finisher of a Cup race at Homestead finished under power.  The record for most laps completed in this race, however, still belongs to Stacy Compton, who in 2001 ran 222 laps before a late-race crash. 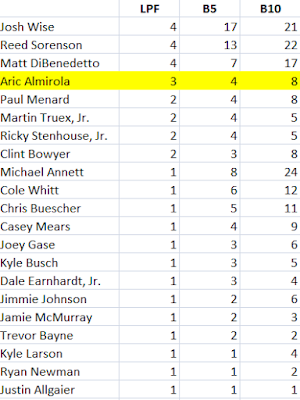